Drunkblogging the State of the Union

Here, at the end, he again mistakes speed for energy. And perhaps even for conviction as well.

He excited Washington — elected, appointed, and credentialed media — with promises of ACTION and DOING SOMETHING and MOVING FORWARD.

The rest of us, tired and wiser but hopefully less cynical, have seen and heard it all before.

And we aren’t hopeful about the change.

I’ll catch up with the comments tomorrow, so keep them coming.

Goodnight. Thanks for reading — I wouldn’t go through this without you.

If there’s equality under the law, where’s my waiver?

“My fellow Americans… men and women like Cory remind us that America has never come easy.”

There’s a bailout for that.

“Nothing that’s worth anything in life is easy.”

Which is why we need to extend unemployment benefits.

This is one hell of a great vet the President is speaking of right now.

A shout-out to the vets, which is always appreciated.

“No other country in the world does what we do. On every issue, the world turns to us… because of the ideals we stand for.”

Wiggleroom is bragging about providing electricity to Africa while the Chinese have bought half the continent.

Um… Mr. President? We negotiated nuclear weapons with the Soviet Union because…

…and hear me out here, I know this is complicated…

…lean in close now, so I can whisper…

…BECAUSE THE SOVIETS ALREADY HAD CRAPLOADS OF NUKES.

OK, I think maybe we both learned something tonight.

Honestly, I admire this guy’s chutzpa. He can stand there and brag that Iran is dismantling just days after Iran said they weren’t and wouldn’t.

“America will always be at [Israel’s] side.”

Maybe sometimes with a shiv, but still.

Strawman alert. Did anyone every say only the military could protect us from terrorism? I think we all learned that lesson from the brave men and women on Flight 93 over a dozen years ago.

Strawman alert. Did anyone every say only the military could protect us from terrorism? I think we all learned that lesson from the brave men and women on Flight 93 over a dozen years ago.

I’ll repeat something I said in an email today, and then on Twitter.

George W. Bush inspired the creation of drunkblogging, but Obama made it hurt.

No serious person can utter the phrase “unified Afghanistan.” It simply can’t be done.

Here’s a question: What is our mission in Afghanistan?

What’d I miss? Nothing?

We’re at the part of the speech where he’s pretty sure nobody is still watching.

I’m going to go quickly refill my drink. We won’t miss anything, either one of us.

“I ask every American” to help somebody get covered by March 31.

Folks, if ♡bamaCare!!! were getting people signed up, then the President wouldn’t be begging for help right now. It’s the worst of Amway and the worst of AmeriPrise, all wrapped together by two TelePrompTers.

“I ask every American” to help somebody get covered by March 31.

Folks, if ♡bamaCare!!! were getting people signed up, then the President wouldn’t be begging for help right now. It’s the worst of Amway and the worst of AmeriPrise, all wrapped together by two TelePrompTers.

And for the record, “Amanda” might be helped, but ♡bamaCare!!! is still WAY in the hole in number of patients with actual coverage. See VodkaPundit.com tomorrow for more.

Nine million Americans have signed up for ♡bamaCare!!! or for expanded Medicaid coverage.

How many are paying customers, adding solvency to the system?

Hello? Is this thing on?

That last little post, the one about My IRA… I wish I were kidding. But if this thing gets off the ground, we really are screwed.

“Tomorrow I will direct the Treasury to… start ‘My IRA.’”

We had a tech bubble, then a housing bubble, so I suppose we simply must have a retirement account bubble.

Baby, you ain’t seen broke yet.

“Tomorrow I will direct the Treasury to… start ‘My IRA.’”

We had a tech bubble, then a housing bubble, so I suppose we simply must have a retirement account bubble.

Baby, you ain’t seen broke yet.

In all fairness, Wiggleroom does now seem energetic and engaged.

You know why? Because this War on Different Peoples stuff works. It worked against Romney two years ago and he’s hoping it works to save the Senate in 2014.

Sure, it sets brother against sister — but that’s nothing compared to keeping Harry Reid as Senate Majority Leader.

“Do what you can to raise your employees wages.”

Or, you know, just pass a law.

Welcome, ladies and gentlemen, to War on Women II.

President who promises not to add one dime to deficit speak with forked tongue. Hell, a knife and spoon, too.

Wiggleroom is stumbling over the last syllables or rushing over so many words, that he’s making me pine for the relative speakerisomeness of Bush. Either Bush.

Something, something, “America fielding a full team.”

“This Congress needs to restore the unemployment insurance you just let expire… let me tell you why.”

Which should tell you how serious Wiggleroom actually is about his new jobs training thingy.

Cutting a trillion dollars of deficit over the next two decades is like me cutting out one cocktail a month starting never.

You know why this is so tiresome? It’s not the man — OK, it isn’t entirely the man.

It’s that this is the same progressive, top-down wishlist of crap people just don’t care about, that I’ve been hearing since I was a kid — back when climate change (“a fact,” Wiggleroom just said) was global warming, after it was the next ice age.

We’re a global leader in solar, which produces very nearly some of our energy needs.

Fracking? Coal? Drilling in the Gulf?

“The all-of-the-above energy strategy I announced… is working.”

Fracking? Coal? Drilling in the Gulf?

I’m waiting to hear about the magnets. Or maybe reverse mortgages.

“China and Europe aren’t standing on the sidelines.”

The fact that this President looks to unstable, dictatorial China and moribund Europe as his inspirations should tell you everything you need to know.

“I’ll act on my own,” tonight’s threatening theme, “to reduce bureaucracy.”

JOBS! ROADS! PORTS! The only thing he didn’t say was “shovel ready.”

If Wiggleroom is serious about closing tax loopholes, I’m all for it. How about we close some waivers in ♡bamaCare!!! while were at it?

“Opportunity is who we are”

I thought we were the change we were hoping for. Or something.

We’re getting retreads from 2007, and it feels like it.

Man, these applause line are weak.

Wiggleroom is rushing it, mistaking (on purpose I’d wager) speed for energy.

Oh. Good. We’re going to subsidize college some more, to make it more affordable, right up until the payments come due.

Praising the First Lady — I won’t pick on that.

“America does not stand still and neither do I.”

The Founders would have called it tyranny. And gathered up pitchforks and things.

“Upward mobility has stalled,” says the man whose health insurance scheme has put an effective cap on middle class income.

Tonight’s schtick, decoded: Work together and do what I want, or I’ll go ahead and do it anyway.

“Let’s see where we can make progress together.” And if not, he has a pen and a telephone.

“Congress finally produced a budget” which will undo lots of that pretend deficit reduction.

“We are not doing right by the American people.”

I’m not going to argue with that.

“That’s why I believe this can be a breakthrough year for America.”

He rushed over the phrase “the state of our union is strong.”

I mean, he buried it in a rush of braggadocio about this dismal economy and “cutting the deficit by more than half.”

From the stimulus that didn’t stimulate? That’s no boast.

“Tonight this chamber speaks with one voice.”

Holy I hope that’s not true.

People doing their parts! It’s funny that most of the people he’s talking about aren’t doing parts dictated by Washington. Maybe there’s a larger lesson in that.

Professor Ditherton Wiggleroom (that’s the President to you non-Sharp Longtime VodkaPundit Readers™) reminds me tonight of Madeline Kahn is Blazing Saddles, and fortunately I’m not speaking of his wardrobe.

And so we begin with an anecdote about a teacher.

To call the applause tepid would be to call my second cocktail finished.

That’s a cue for me to refill.

It’s the calm before the nap.

Did anyone catch which cabinet member is in the undisclosed location tonight?

Are you as tired as I am of the human props?

Although to be honest right now I’m not sure if I mean the Professor’s guests or the Congress.

Somewhere upstairs I hear my three-year-old crying. He has no idea.

Watch and cherish Joe Biden’s last few moments of consciousness for the evening.

John Boehner and a big hammer. That’s halfway to a (late) Pete Seeger song right there. 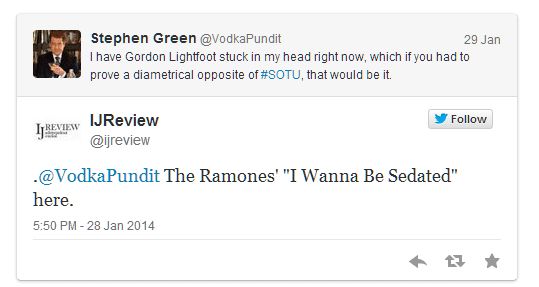 Reminder: I do not play drinking games. I drink.

Because I’m more machine now than man, I’m also putting some stuff up on Twitter. (Lord, but I need an assistant.) I’ll share some of it with you here, but if you aren’t following me on Twitter then there’s something deeply wrong with you.

“Getting something done” seems to be the theme on C-SPAN tonight, which I suppose means that was the secret DNC memo this morning, just like I used to receive my money and marching orders from Karl Rove, after learning the secret handshake.

And that’s just it, isn’t it? DOING SOMETHING, movement, action, laws, executive order — those are GOOD things, because Washington is GETTING SOMETHING DONE.

The fact that we’re the ones paying for all the unintended consequences doesn’t seem to matter, much less get reported on.

For the record and despite the rumors, I am not the openly gay former NBA player sitting in the gallery this evening.

Crap. I have to refill my drink already, and it was a big one.

Gonna be a long night of a short speech.

I should note that my friend Tom Dougherty has a Practical Guide to Viewing SOTU, as opposed to the completely impractical one I provide for you.

On a personal note, you know what I enjoy most about the callers on C-SPAN? Their practicality. No, their sanity. Maybe it’s their dulcet tones.

Now with the formalities out of the way, let’s get to the cocktail-fueled snark, shall we?

Since I can’t do a better job of previewing what Professor Ditherton Wiggleroom will say tonight than Twitter’s @Shoshido, here she is in her own tweet.

He was a real statesman, that Wilhelm.