Yesterday afternoon, Fulton County District Attorney Paul Howard held a press conference to announce charges against the officers involved in the shooting of Rayshard Brown. Officer Garrett Rolfe has been charged with 11 counts including felony murder. His partner, Officer Devin Brosnan, was charged with three counts, including aggravated assault and violations of the oath.

In announcing these charges, Howard indicated Brosnan had turned state’s evidence. This was immediately corrected in a statement by Bronsan’s attorney, Don Samuel:

The attorney went on to say that Brosnan suffered a concussion when his head was slammed into the concrete during the physical fight with Brown. He also has burns from the taser that Brown had taken and then used on the officer as well as other injuries.

There are also significant problems with other assertions that DA Howard made. He accused officers of not rendering aid for two minutes. This is clearly not the case, as video of the event shows. Samuels’s statement reads:

“After Mr. Brooks ran away, with Officer Rolfe in pursuit, Devin got up and followed. You can tell from the video that he is limping. What you can’t tell is that he was disoriented from the head injury. After Mr. Brooks was shot, Devin ran to the location where Mr. Brooks had fallen. Within a minute – less than a minute – Rolfe runs back to his car to get medical equipment, at the same time another officer arrives on scene. You can see on the video – at time stamp 23:24:59 – the officers tried to stabilize Mr. Brooks and gave first aid. Devin did what he could to save Mr. Brooks.

Deadly Weapon or Not?

In announcing the charges, DA Howard asserted that a taser is not a deadly weapon. There is just one problem. He asserted the exact opposite in making charges against two other officers who had been fired after an incident during the recent riots.

Two weeks ago, the DA in Atlanta who's currently charging Officer Garrett Rolfe in the Rayshard Brooks case charged police officers with aggravated assault for using a taser on protesters.

"A taser is considered a deadly weapon under Georgia law" pic.twitter.com/ZQfsjllEQS

The actual ruling from the Georgia Supreme Court regarding the offensive, not defensive use of a taser, in Hartwell v. State in 1999 stated:

It appears it’s left up to a jury to determine the nature of a weapon in the context of its use. The fact the DA made both assertions in the space of two weeks is not a good look and neither is supported by case law.

Officer Rolfe’s lawyer, Lance LoRusso, also issued a statement following the announcement of charges. It largely concurred with the events described by Officer Brosnan’s attorney and expanded on the actions Officer Rolfe took. Rolfe attempted to use his taser several times until Brown reached behind his back and deployed the taser in Rolfe’s direction. This is clear on the video of the incident. LoRusso also disputes the DA’s characterization of the aid provided to Brown, saying EMS was called immediately.

At the end of the statement, LoRusso mentions an ongoing investigation of the incident being conducting by the Georgia Bureau of Investigation (GBI). In their own statement, the GBI indicated the investigation has not concluded and they had not been informed or consulted regarding the charges. 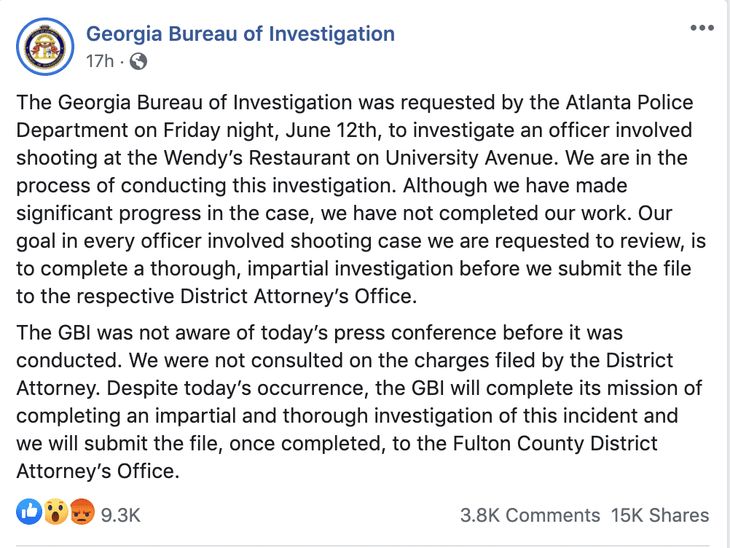 So why would Howard announce these charges with an incomplete investigation and obviously false statements that are documented on video? The answer is politics—both those occurring on the national stage and his own reelection woes.

President Trump, the House, and the Senate have announced priorities for police reform actions in the wake of the death of George Floyd at the hands of Officer Derek Chauvin and nationwide riots. Local and state governments have also taken quick action in many locations. Calls to “defund the police” have been taken up by big city Mayors in Minneapolis, New York City, and Los Angeles.

Despite the significant differences between the Floyd and Brown cases, perhaps Howard thought he had to take action. However, Howard’s obvious misstatements are already problematic. His assertions that the officers kicked and stood on Brown are dubious at best and as noted above there are several outright lies about the timeframe and the status of Officer Brosnan’s case.

The severity of the charges is also shocking. Officer Chauvin knelt on Floyd’s neck for eight minutes and 46 seconds while the suspect was subdued, handcuffed, and repeatedly asked for help. Officer Rolfe and his partner were assaulted, Brosnan was injured, Brown had taken a weapon and pointed it at Rolfe. Rolfe is charged with felony murder, which can carry life in prison or a death sentence. Chauvin is charged with second-degree murder, which carries a maximum sentence of 40 years.

Burke County Sheriff Alfonzo Williams, who trains officers in Georgia and characterized the shooting of Brown as “completely justified” based on video evidence, explains the differences:

Paul Howard has been in office for 19 years and has often run for reelection unopposed. That is not the case in 2020. After the June 9 primary, he is entering the runoff election in second place. His opponent and former Chief Assistant District Attorney Fani Willis plans to use the fact that Howard is under investigation by the GBI to reinforce the need for a change in the office.

Channel 2 and AJC reporters discovered that the city of Atlanta sent $250,000 to the district attorney’s office for crime prevention programs and almost 80 percent of that went into Howard’s paycheck.

Howard in May called the issue an “administrative matter” and said he expects to be exonerated.

“He does what is best for him and what the district attorney should do is what’s for the people. We see that in you stealing $195,000 from black and brown children,” Willis said.

Willis also asserted that Howard’s charging of six additional officers for aggravated assault during the protests and riots at the end of May was political.

In addition to the criminal investigation by the GBI, Howard is also facing three civil lawsuits alleging sexual harassment or gender discrimination.

The Edge of Chaos

There is no good ending here and the beginning of the end started last night. The scanners in Zones 5 & 6 were mostly silent last night, which is atypical. This bolstered rumors of a walkout among Atlanta Police. Mayor Keisha Lance Bottoms called it a walkout on CNN.

Atlanta Mayor @KeishaBottoms should face reality and realize it’s impossible for #AtlantaPolice officers to remember their oath’s when the government they serve has forgotten it first. pic.twitter.com/hpb0i5yxLf

The Atlanta PD tweeted they had an unusual number who called in sick, but said all was well.

Earlier suggestions that multiple officers from each zone had walked off the job were inaccurate. The department is experiencing a higher than usual number of call outs with the incoming shift. We have enough resources to maintain operations & remain able to respond to incidents.

At one point on social media, it was reported that there was a backlog of 581 calls last night and officers in four of Atlanta’s six zones were involved in the walkout. It was also reported that surrounding jurisdictions would not provide assistance. The International Brotherhood of Police spokesperson Vince Champion confirmed the officers’ protest, which included calling in sick, refusing calls, and going radio silent. Clarity on the extent of what occurred is still not available.

Exactly how divisive this case will prove to be is still up in the air. The public is deeply divided and there is national attention. It is also very possible Howard will not be the district attorney when these cases are tried. It places Willis in a terrible position if she ultimately wins the seat. Amending the charges or prosecuting the cases is an untenable choice.

Atlanta may serve as a national example for the results of politicizing the police. Early indications are it leads nowhere good. The nation was unified on the George Floyd case and wanted justice. The nation, the state, and the city appear hopelessly divided on the Brown case. And at this point, there is not a leader to step forward to repair the rift.