Hebron was the first piece of land ever purchased by a Jew in Israel. Approximately 38 centuries ago, the patriarch Abraham purchased a cave in Hebron to bury his beloved wife Sarah. Jews have owned land in Hebron from then until the early part of the 20th century.

On Friday, August 23, 1929, that changed. Things began to stir as the Jewish community was preparing for the Sabbath:

At about half past two on Friday we saw a young Arab arrive by motorcycle from Jerusalem. He alarmed the Arab inhabitants of Hebron, saying that the blood of thousands of Moslems in Jerusalem was being shed like water. He called to the Arabs to avenge this blood. The unrest among the Arabs of Hebron was very strong, particularly after the motor cars began to arrive from Jerusalem with news of disturbances.

Similar charges are used by the Palestinians today to incite violence against Israel. Both the first and second intifada began with false charges of Israeli actions against Muslims and their holy places in Jerusalem.

Rabbi Ya’acov Slonim, head of the Sephardic (Jews from the Middle East and Iberian Peninsula) Jewish community, and Rabbi Frank, head of the Ashkenazic (Jews from Eastern Europe) community, turned to the Arab governor of Hebron, Abdullah Kardos. The governor calmed us and said: “There is no fear of anything happening. The British Government knows what it has to do. In the place where two soldiers are needed, it sends six.” And he added: “I tell you in confidence that they have many soldiers in the streets, in civilian clothes; these soldiers circulate among the crowds, and in the hour of need they will fulfill their duty.”

If that sounds familiar, it should. Just like today, when the world community promises to use their influence or might to prevent Arab terrorism, the promises of protection in August 1929 were not backed up with action:

That night, Rabbi Ya’acov Slonim’s son invited any fearful Jews to stay in his house. The rabbi was highly regarded in the community and besides, he had a gun. Many Jews took him up on this offer, and many Jews were eventually murdered there.

On Saturday morning, before the slaughter began, the rabbis again appealed to the governor for help. Again they received the same astounding assurances. Bewildered, they turned to Mr. Cafferata, the British officer in charge of the police. From him, too, they received assurances of safety.

As early as 8:00 a.m. on Saturday, the Jewish Sabbath, Arab crowds began to gather. They came in mobs, armed with clubs, knives, and axes. The Arab women and children threw stones, the men ransacked Jewish houses and destroyed Jewish property. With only that single police officer in Hebron (Mr. Cafferata), the Arabs entered Jewish courtyards with no opposition.

Rabbi Slonim, who had tried to shelter much of the Jewish population in his own home, was approached by the rioters and offered a deal. If all the Ashkenazi yeshiva students were given over to the Arabs, the rioters would spare the lives of the Sephardi community. Rabbi Slonim refused to turn over any of the students and was killed on the spot, along with his wife and young child. In the end, 12 Sephardi Jews and 55 Ashkenazi Jews were murdered. 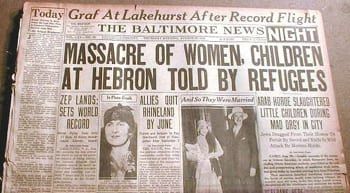 “On hearing screams in a room I went up a sort of tunnel passage and saw an Arab in the act of cutting off a child’s head with a sword. He had already hit him and was having another cut, but on seeing me he tried to aim the stroke at me, but missed; he was practically on the muzzle of my rifle. I shot him low in the groin. Behind him was a Jewish woman smothered in blood with a man I recognized as a police constable named Issa Sherif from Jaffa in mufti. He was standing over the woman with a dagger in his hand. He saw me and bolted into a room close by and tried to shut me out-shouting in Arabic, ‘Your Honor, I am a policeman.’ I got into the room and shot him (Bernard Wasserstein, The British in Palestine: The Mandatory Government and the Arab-Jewish Conflict 1917-1929).”

“Now let me tell you about the massacre. Right after eight o’clock in the morning we heard screams. Arabs had begun breaking into Jewish homes. The screams pierced the heart of the heavens. We didn’t know what to do. Our house had two floors. We were downstairs and a doctor lived on the second floor. We figured that we would be safe in the doctor’s apartment, but how could we get up there? The stairs were on the outside of the building, but it wasn’t safe to go out. So we chopped through the ceiling and that way we climbed up to the doctor’s house. Well, after being there only a little while, we realized that we were still in danger because by that time the Arabs had almost reached our house. They were going from door to door, slaughtering everyone who was inside. The screams and the moans were terrible. People were crying Help! Help! But what could we do? There were thirty-three of us. Soon, soon, all of us would be lost (Letter of a Survivor).” 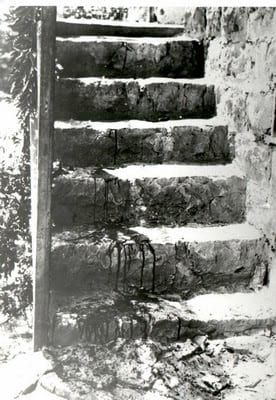 When the terrorist massacre finally ended, the surviving Jews resettled in Jerusalem. Some Jewish families tried to move back to their homes in Hebron, but were removed by the British authorities in 1936 at the start of the Arab revolt. In 1948, the War of Independence granted Israel statehood, but Jews were cut off from Hebron, as the city was captured by King Abdullah’s Arab Legion and ultimately annexed to Jordan.

When Jews finally gained control of the city in 1967, a small number of massacre survivors again tried to reclaim their old houses. Then defense minister Moshe Dayan supposedly told the survivors that if they returned, they would be arrested, and that they should be patient while the government worked out a solution to get their houses back. Dayan never got around to it — guess he was too busy giving away Jewish rights to the Temple Mount.

The Memorial of the Jews of Hebron, as submitted to the high commissioner of Palestine, closes with these tragic words:

In the name of sixty-five slaughtered, fifty-eight wounded, and many orphans and widows; in the name of the remnants of the plundered and tortured we accuse:

1. The [British Mandatory] Government, which did not fulfill its duty and provide protection for its peaceful and defenseless charges.

2. The Governor, Abdullah Kardos, and the Commander, Cafferata, who deprived us of the means of appealing for help and defense, betrayed us with empty promises and gave the murderers and robbers their opportunity.

3. The police, which did not fulfill its duty, and behaved with contemptible baseness.

4. The emissaries of the Mufti and the Moslem Council, in particular the Sheikh Talib Narka and his colleagues, those mentioned above, as well as those who have not been mentioned, who proclaimed the massacre and permitted murder and rape.

5. Also the inhabitants of Hebron (with the exception of some families) who did not rise up to help their brothers and neighbors in accordance with the commandments of the Koran …

Some 80 years later, that memorial still rings true. Arab terrorists are still using false charges as an excuse to attack innocent Jews in Israel — now they receive help from the mass media and organizations such as Human Rights Watch. UNIFIL, which was appointed by the UN to protect Israel’s northern border, does nothing to prevent a missile buildup by terrorists, and there are no moderate Muslims standing up to their terrorist brothers.

Eighty years after the Hebron Massacre, the world community still does not stand up to Arab terror and still does not care about the blood of one more Jew.

In 1929, the Jews of Hebron learned that they cannot rely on anyone else for protection. The terrorist attacks of that summer led to the strengthening of Jewish armed forces, such as the Haganah, to protect the Jews in the Holy Land.

Some 80 years later the government of Israel must remember that lesson. The leadership of her allies change — some will be willing to help Israel, some will abandon her.

In the end, there is no country other than Israel which will protect Israel.

Sammy Benoit is the editor of the political blog The Lid.
Read more by Sammy Benoit