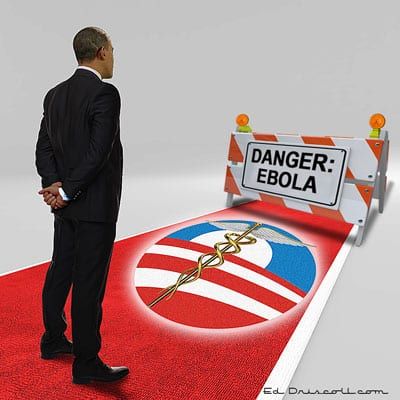 WASHINGTON – A Centers for Disease Control and Prevention (CDC) official says the Ebola outbreak in West Africa is “unprecedented” and has required the agency to “mobilize as never before.”

Donald Shriber, deputy director for policy and communications at the CDC, said the agency is working closely with countries in the region to “bend the curve.”

“Everything we do…is in service to the response of the host countries in which we work. We’re not working separately from them. It’s critical that countries be in charge,” Shriber said Thursday at a panel hosted by the Atlantic Council.

The CDC has deployed more than 130 staff to West Africa supported by hundreds of people at the agency’s headquarters in Atlanta.

Shriber said the outbreak has “disproportionately impacted” healthcare workers and has increased the need to recruit more healthcare staff in the region.

“The epidemic is likely to get worse before it gets better, despite maximal and growing efforts by the global community and by CDC and others,” he said.

Shriber said the CDC is working with public health and clinical officials around the U.S. on preparedness for managing potential Ebola patients and is working with airlines to screen passengers coming from countries with known outbreaks of Ebola.

“The West Africa epidemic really is unprecedented in its scope and scale, and rapid scale-up is essential to reverse its course,” he said.

Donald Lu, deputy coordinator for Ebola response at the State Department, said the U.S. government is working “tirelessly” to reach out to foreign governments and coordinate the international response to the crisis.

Lu said since the United Nations meeting last week more than 30 countries and five financial institutions have committed to contribute to the fight against the Ebola virus.

“On Sept. 16, we counted $50 million worth of bilateral commitments by other countries. Today, we are seeing more than $200 million. The World Bank has committed over $400 million to this effort. The International Monetary Fund is increasing the speed at which it is able to deliver its assistance of $130 million. Add to that, the private sector response with very generous grants by the Gates Foundation, Paul Allen foundation, and many others,” he said.

More than 3,000 have died in Guinea, Sierra Leone, Liberia, Senegal, and Nigeria during the current Ebola epidemic and at least 7,178 have been infected, according to the World Health Organization (WHO).

The outbreaks in Nigeria and Senegal are likely over because of the swift action to control the virus taken by these countries. In other countries, however, the number of cases has been doubling every three weeks and the crisis has continued to worsen. In Liberia, for instance, confirmed cases increased 26 percent between Sept. 9 and Sept. 17.

The Pentagon announced Tuesday that about 1,400 soldiers will head to Liberia this month to help support the fight against the virus.

Anne Witkowsky, deputy assistant secretary of Defense for partnership strategy and stability operations, said the Defense Department is providing logistical and engineering support to the region.

The department has already sent the equipment for a 25-bed hospital for healthcare providers in Monrovia, the capital of Liberia, and has provided hundreds of cots and tents to house Ebola patients.

“We’ve also begun planning to provide, in concert with regional and other international partners, the development of an intermediate staging base in Senegal with possible establishment of other West African logistics hubs to support U.S. government and international logistics efforts,” she added.

In addition, the Defense Department will provide support for the construction of 17 Ebola treatment units (ETU) in Liberia.

“We estimate that the first of these ETUs will be constructed within the next few weeks with a steady progression of other facilities after the first one,” Witkowsky said.

Michael, who has been working since 2008 with the NIAID team that developed the vaccine, said the NIH had initially planned to start testing the vaccine in Uganda by March 2015 but now it expects to begin human trials in four weeks. The vaccine is currently undergoing a human-safety trial at the NIH campus in Bethesda, Md., and the University of Oxford.

The Walter Reed Army Institute of Research received approval last week to begin safety testing of the second vaccine being developed by the Public Health Agency of Canada.

The WHO debated during a two-day meeting in Geneva the implementation of randomized control trials to test the vaccines.

“This brings up lots of issues in terms of justice and fairness and many issues of bioethics that we could talk about. But I will say, at the end of the day the most efficient way and the safest way to get to understanding if these vaccines work in humans is to do those kinds of studies in Africa,” Michael said.

Michael noted there are several obstacles to carry out these studies successfully, namely the difficulty in coordinating and organizing these tests in “places where people are at risk.”

“In order to do that right, and get quality information, it requires the ability to have good logistics,” he said. “So, I think that’s going to be something we’re going to have to get the sharp pencils out and really think very hard about.”

Related: “An Obamacare Mandate Connection to the Dallas Ebola Case?” From Bryan Preston at the PJ Tatler.