We Can Solve the Financial Crisis by Destroying OPEC

In recent weeks, the threat of a world financial collapse has dominated the headlines. Banks and other credit institutions have become endangered because the fall in the housing market has destroyed the value of their mortgage-backed securities. Yet, despite a half-trillion-dollar class bailout package mobilized by the U.S. government, and similar moves in Europe, the situation stands to get worse unless we deal with the root cause.

We need to ask ourselves the question: Why has the housing market collapsed? If you want the answer, just follow the money. It’s gone to pay for oil.

Consider: This year, with OPEC-rigged oil prices averaging near $110/barrel, Americans will pay $900 billion for their oil supply, and the world as a whole will pay $3.6 trillion. These petroleum costs are up a factor of ten from what they were in 1999, and represent a huge, highly regressive tax on the world economy. For Americans, the $900 billion oil levy (up from $80 billion in 1999) is equivalent to a 33% increase in income taxes across the board — with sixty percent of the sum being paid over in tribute to foreign governments.

If we consider existing home sales, the pattern remains the same. Because the typical home is held for about 16 years between sales, and long-term appreciation of homes has averaged about 3% per year since the early 1990s, the net additional real estate capitalization due to an existing home sale can be expected to be about 40% of the sales price. Taking this into account along with the new home sales, total net American investment in housing stock went from $785 billion in 2003 to an annual rate of $622 billion this year, a $163 billion decline that is dwarfed by the $760 billion rise in annual oil payouts over the same period.

The graph below shows a comparison of American oil expenditures with net investment in housing stock. 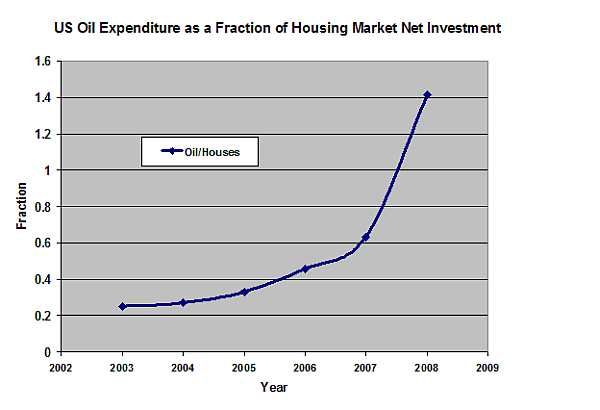 It can be seen that in 2003 we spent 25% as much on oil as we did on houses. In 2008, we spent over 140%. This is why our housing market has collapsed. It is also why new auto sales have collapsed as well. Indeed the $760 billion increase in our oil payments is fifteen times the $50 billion decline in what we spent on new cars in 2008.

So, as a result of this massive new tax on our economy — by far the largest in American history — the United States is being driven into a recession. But for poor countries, which can afford it even less, the effect of the brutal OPEC global taxation program is much worse.

If we want to avoid complete economic defeat, we need to destroy the oil cartel. This cannot be done through conservation, because — putting aside the difficulty of getting the whole world to agree on conservation — so long as they are the only game in town, the cartel can always counter any conservation program by cutting production to match. The only way to beat them is to break their vertical monopoly by creating fuel choice on a global scale. The U.S. Congress can make this happen with a stroke of the pen, by passing a law requiring that all new cars sold in the United States be flex-fuel vehicles that can run on any combination of gasoline, ethanol, or methanol. The technology is readily available and it only costs about $100 per vehicle.

By making America a flex-fuel vehicle market, we will effectively make flex-fuel the international standard, as all significant foreign car-makers would be impelled to convert their lines over as well. Around the world, gasoline would be forced to compete at the pump against alcohol fuels made from any number of sources. These include current commercial crops like corn and sugar; cellulosic ethanol made from crop residues and weeds; methanol, which can be made from any kind of biomass without exception; as well as coal, natural gas, and recycled urban trash. By creating such an open-source fuel market, we can enormously expand and diversify humanity’s fuel resource base, protecting all nations from continued blackmail, robbery, and indeed, in some cases, starvation, induced by the oil cartel.

If we fail to do so, we are going to be taxed into depression.

- Dr. Robert Zubrin is president of Pioneer Energy,  a senior fellow with the Center for Security Policy, and the author of Energy Victory. The paperback edition of his latest book, "
Read more by Robert Zubrin