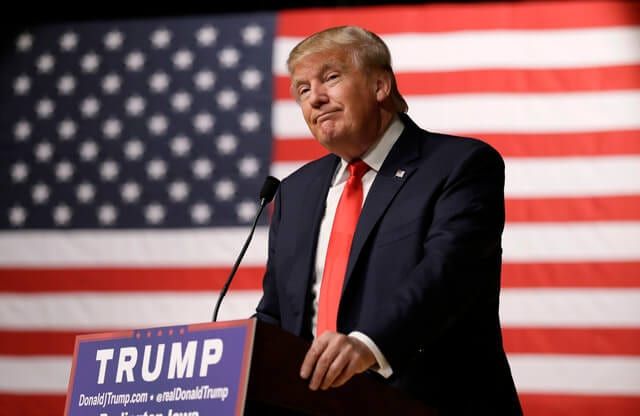 Donald Trump’s boast that if he had been president, the September 11 jihad terror attacks would not have happened because “if I were running things, I doubt those people would have been in the country,” has been gaining him even more notoriety and cheers from foes of Obama’s immigration policies. What Trump would do to prevent jihad terror attacks by domestic jihadis, or Sharia encroachment on American freedoms, however, is far less clear than his stance on immigration, and some of the things he has said about these matters should give even the most full-throated of his enthusiasts considerably less to cheer about.

Several weeks ago, in the midst of Ben Carson’s remarks on sharia, Eric Bolling of Fox News asked Trump: “Would you want the president or a candidate to say, ‘I will promise to uphold the Constitution over the Sharia law’?” Trump replied: “Well, I think it’s an argument I don’t want to get into, it’s not my argument, so it’s an argument that I won’t get into.”

Promising to uphold the Constitution over sharia is not an argument that Trump wants to get into? He may not be aware that if he becomes president, he will solemnly swear to “preserve, protect and defend the Constitution of the United States,” and this solemn responsibility extends far beyond his competition with Ben Carson.

What’s more, after he denounced our free-speech event in Garland, Texas, last May, which was attacked by Islamic jihadists, it is not at all clear that Donald Trump understands the jihad imperative or the war against free speech, or is at all equipped to counter them.

Many people, particularly his supporters, misunderstand this point, saying that Trump is all for free speech but that he just objects to how Pamela Geller and I were exercising it by drawing Muhammad. The fact that I was co-organizer of and a speaker at the Garland event only obscures the issue because it makes people think that my criticism of Trump on this score is personal. In reality, I would take issue with him just as strongly if he had said that people should not draw Muhammad in any context, referring to any event – not because there is some intrinsic necessity to draw Muhammad, but because when violent jihadis commit murder to prevent people from drawing Muhammad, to desist voluntarily from drawing Muhammad is to reward violent intimidation, and encourage more.

When Trump said, “They can’t do something else? They have to be in the middle of Texas doing something on Muhammad and insulting everybody?”, he was revealing that he did not grasp that essential point, and was willing to acquiesce to sharia restrictions on the freedom of speech.

The real question is this: Is the freedom of speech only to be defended when we like what is being said? Speaking strictly for myself, I always hated the Charlie Hebdo Muhammad cartoons: they were crude, puerile, silly and often genuinely offensive (not because they depicted Muhammad). But I understood that they were necessary, as the cartoonists were standing up to the jihadist bullies and showing that violent intimidation would not rule the day, so I never voiced any objections: to have done so would have needlessly detracted from the genuine meaning and importance of what they were doing.

That battle was lost: Islamic jihadis murdered the cartoonists, and Charlie Hebdo surrendered, vowing never to draw Muhammad again. But the principle remains, and people like Trump, Bill O’Reilly and Laura Ingraham, who took issue with what we were doing in the wake of the jihad attack on our event in Garland, don’t seem to grasp what the freedom of speech is all about. What they’re missing is neatly encapsulated in what used to be an adage: “I do not agree with what you say, but I will defend to the death your right to say it.” In other words, I will stand with you against tyranny because even if I disagree with your opinions, I understand that once opinions begin to be criminalized, we are all the poorer, and all at risk.

Trump doesn’t get this. After Garland, he breezily and readily voiced his willingness to adhere to sharia blasphemy laws and refrain from drawing Muhammad. And he reinforced this impression in his interview with Bolling, when he refused to say whether he agrees that the president should put the Constitution over Sharia.

So when Donald Trump says that he would have prevented 9/11, his sharia compliance makes me wonder if his doing so would have made any difference for the U.S. in the long run.