Clear Channel, Intimidated by Terror, Forbids Criticism of Muhammad on Their Billboards

Do we really still have freedom of speech in this country?

Nearly four years ago, then-Secretary of State Hillary Clinton gave a strong indication that she and her cohorts were going to make it increasingly difficult to say anything negative about Muhammad. In an address on the freedom of speech at an Organization of Islamic Cooperation (OIC) conference on combating religious intolerance, she said:

Together, we have begun to overcome the false divide that pits religious sensitivities against freedom of expression and we are pursuing a new approach. These are fundamental freedoms that belong to all people in all places and they are certainly essential to democracy.

But how could both religious sensitivities and freedom of expression be protected?

The OIC’s then-Secretary General Ekmeleddin Ihsanoglu offered an answer: by criminalizing what he considered to be hatred and incitement to violence. He declared:

We cannot and must not ignore the implications of hate speech and incitement of discrimination and violence.

At the same time, he claimed that the OIC did not really want to criminalize free speech:

Our cause, which stems from out genuine concerns, should not be interpreted as calls for restriction on freedom.

To understand how Ihsanoglu could call for restrictions on the freedom of speech while simultaneously claiming that that was not what he was doing, one had to enter his Orwellian world (one that the American Left has eagerly jumped into) in which “hate speech” — as identified and labeled by Ihsanoglu himself and his fellow Islamic supremacists — was not and should not be considered to be protected free speech.

Clinton had the First Amendment to deal with. So in place of legal restrictions on criminalization of Islam, she suggested:

… old-fashioned techniques of peer pressure and shaming, so that people don’t feel that they have the support to do what we abhor.

She held a lengthy closed-door meeting with Ihsanoglu in December 2011 to facilitate the adoption of measures that would advance the OIC’s anti-free speech. But what agreements she and Ihsanoglu made, if any, have never been disclosed.

After the jihad attack at the Muhammad cartoon contest that Pamela Geller and I hosted in Garland, Texas, last month, we got a taste of those “old-fashioned techniques of peer pressure and shaming.”

Many people — on both the left and the right — criticized us for gratuitously offending Muslims. Luminaries such as Bill O’Reilly and Laura Ingraham acknowledged the point of our event — to stand for the freedom of speech against violent intimidation — but insisted that just because we could do something didn’t mean that we should do it.

They maintained that demonstrating respect to Muslim sensibilities would in the long run do more to fight jihad terror than defiance in the face of threats and murder.

Events have moved quickly. Now, just weeks later, we have moved from “you can do it, but you shouldn’t” to “you can’t do it” — at least on public billboard space.

If you dare to cross into political incorrectness, you’ll be subjected to “peer pressure and shaming.” As I wrote recently, Muhammad is now the man we all must love, and the billboard giant Clear Channel has now shown what that means.

Muhammad — peace be upon him — believed in peace, social justice, women’s rights.

When Geller and I tried to counter this ridiculous deception with the truth, Clear Channel was not so accommodating.

All of these assertions are readily verifiable from core Islamic texts. But Clear Channel nixed this ad, so we developed a new one featuring quotations attributed to Muhammad himself in the Hadith:

I have been made victorious through terror; I have seen that the majority of the dwellers of Hell-fire were you (women); I have been commanded to fight against people.

That one got a thumbs-down from Clear Channel as well, even though we readily complied with their request to show the Islamic sources from which these quotes came.

Clear Channel’s Jack Jessen told Pamela Geller that he rejected our ad because:

[It had a] negative connotation to it.

But Clear Channel has no problem with negative ads in general. It readily ran atheist ads criticizing belief in God, and has had no qualms about running Palestinian anti-Israel hate propaganda: 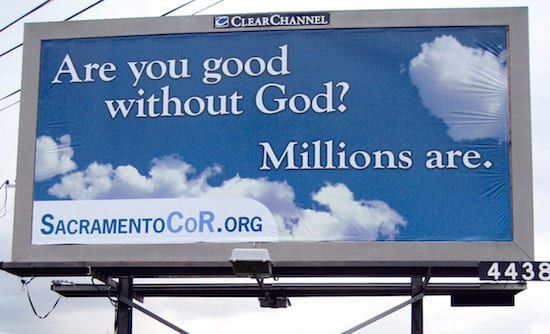 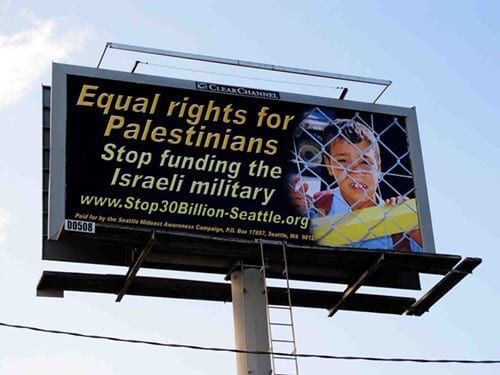 But quoting words attributed to Muhammad that might make Americans less ignorant and complacent regarding the jihad threat?

Apparently, it is now forbidden to dissent publicly from the idea that Muhammad was nothing less than the perfect example for all human conduct that the Qur’an says he is (33:21).

Clear Channel’s Jessen may be dimly aware that criticism of Muhammad is forbidden in Islamic law, not American law, but he knows very well that if he allows our ad, he and his company would be subjected to a barrage of “peer pressure and shaming” from the Leftists and Islamic supremacists who dominate the public discourse today.

And who needs that? Not Clear Channel. Better just to fall into line.

Mr. Jessen needs to understand that, in practice, he is obeying the immortal words of 9/11 hijacker Muhammad Atta:

Stay quiet and you’ll be okay.

If we all just stay quiet, perhaps we will barely notice the imposition of Sharia restrictions on the freedom of speech, enforced through Hillary’s “peer pressure and shaming.”