The Rise of the Cult of Death

Her shrines can be found in the lairs of the most violent criminal gangs, her worshipers are known to have committed verified human sacrifices, and her cult has spread from secret temples in rural Mexico to almost every large city in America. Santa Muerte — the death goddess of Mexican narco-cults — has arrived in America and established a foothold in our communities that will be impossible to dislodge. While many are rightfully concerned about jihadists crossing our southern border, there is another death cult spreading among us that is just as dangerous as Islamic terrorists.

The origins of the Santa Muerte cult are a mystery even to adherents. One common myth is that a 19th century Brujo chaman (witch doctor) had a vision of the goddess who ordered the creation of the cult. This supposedly happened near Veracruz. However a report prepared by Kevin Freese for the Foreign Military Studies Office points out many devotees claim the Santa Muerte cult has existed for thousands of years in secret, only becoming widespread under the Aztec rule. Worshipers claim that this “saint” is actually the goddess Mictecacíhuatl, who was said to eat the dead and was worshiped by skinning human sacrifices alive.

Little wonder that the Catholic Church officially describes the veneration of Santa Muerte as devil worship. Still, many Mexicans who consider themselves Catholic make offerings to the black goddess for protection, success, or vengeance.

While the origins of the cult are murky, what is clear is its association with crime and Mexico’s brutal cartel war. In 2008 police found a shrine to Santa Muerte where members of the Zetas paramilitary were sacrificing rival drug members. In that case, 11 men were decapitated and their heads were burned in a clearing.

The brutality of those slayings mirrors the crimes of Adolfo de Jesus Constanzo, whose coven regularly sacrificed Mexicans to empower his Nganga — an altar made from human body parts believed to contain a familiar spirit enslaved to the magician. The group’s murders would have gone undetected for years had they not made the mistake of abducting an American tourist named Mark Kilroy. Authorities were forced to investigate the disappearance and found Kilroy’s brains in Constanzo’s Nganga.  Ultimately, Constanzo and his group were charged with 16 ritual murders.

There were 74 known ritual murders in Mexico City at that time. Fourteen of the victims were infants.

Constanzo’s altar included Santa Muerte statues and Constanzo’s high priestess — a woman named Sara Maria Aldrete Villareal — was given the nickname La Madrina, Spanish for godmother. This is also one of the many honorifics Santa Muerte devotees give to their goddess. After her capture Villareal had this to say about the cult:

I don’t think the religion will end with us, because it has a lot of people in it. They have found a temple in Monterrey that isn’t even related to us. It will continue.

And indeed the cult has come a long way since the 1989 Matamoros murders. At last count there were at least ten public shrines dedicated to Santa Muerte in Mexico City and up to 120 public altars. A self-proclaimed bishop of the cult named David Romo Guillen ran “masses” at midnight venerating Santa Muerte starting in 2002. Attendance was estimated to average between two and three hundred people. In 2011 Guillen was arrested for running a kidnapping ring. 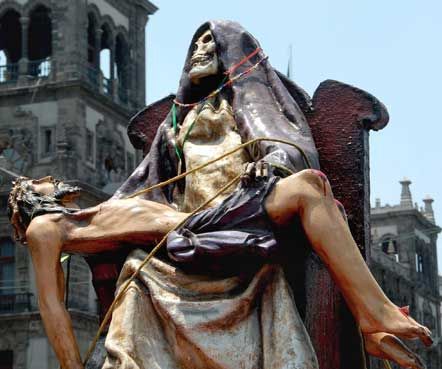 Santa Muerte shrines have increasingly been found among gang related businesses such as drug trafficking and prostitution rings, especially businesses run by MS-13,the Latin Kings, and the 18th Street gang. The shrines are used both to supernaturally aid the worshipers and to terrorize the communities they are in.

In one such case, Jorge Flores Rojas, a sex trafficker operating in Charlotte, North Carolina, used the goddess to scare his victims into submission. After kidnapping the daughter of an acquaintance and raping the girl repeatedly, Flores forced the girl in front of one of his Santa Muerte shrines. There he took her underwear, stuffed them in an offering container, and told the girl should she try to escape the saint would punish her. In this way he kept the teenager in line while he sold her to dozens of men, until she was rescued by police.

There is also evidence of human sacrifices to Santa Muerte happening on American soil. In Chandler, Arizona, three illegal immigrants from Mexico stabbed to death and beheaded a fourth acquaintance in a brutal killing that baffled police. Neighbors reported seeing the men using Ouija boards and burning candles in some sort of rituals.

But Santa Muerte is not just worshiped by Mexican immigrants. The cult has made inroads into western occultism as evidenced by businesses aimed at Wiccans and other neo-Pagan groups offering ritual items useful only to the Santa Muerte cultist. In addition to candles, incense, and other altar items, the only known grimoire for the cult — Juan Ambrosio’s La Santa Muerte Biografía y Culto:  Ventiséis rituales personales para conseguir salud, dinero y amor — is now carried by many occult supply shops though it seems to have not yet been translated into English.

That may explain another human sacrifice in the southwest, this time in New Mexico. A self-described Wiccan named Angela Sanford stabbed 52-year-old Joel Leyba to death on the Vernal Equinox, a magically and religiously significant day in many occult traditions. Some reports claim the man was stabbed 13 times though that has not been confirmed. Sanford claimed self-defense in the case, saying she invited the man out to the desert for a “Wiccan celebration” and he tried to rape her. Police found that story hard to believe after finding that on her cell phone contact list Leyba was nicknamed “sacrifice.”

Clearly Sanford was not what we traditionally think of as a Wiccan.

But was she part of the Santa Muerte cult or just some woman who liked sacrificing people? We’ll never know for sure, partly because the cult itself is not an actual religion so it’s unclear who actually belongs to it. The veneration of Santa Muerte is a magical tradition that has little in the way of moral or philosophical instruction. Instead it simply transmits a series of rites designed to appease a being devotees think is an ancient goddess of death who once demanded people be killed in horrible ways to appease her. And while not all of the cultists commit crimes, a significant number of them come from the ranks of violent gangs, the virulently racist and anti-Semitic Reconquista movement, and impressionable dabblers in the occult seeking thrills.

While not the organized threat of militant Islam, Santa Muerte’s spread into our major cities among those who are part of the unseen underground is still a potential danger we need to recognize. In a 2011 interview with (assumedly) law abiding Santa Muerte worshippers AP found that even fellow devotees were fearful of each other. In that same report, Texas Marshall Robert Altamonte confirms that south of the border sacrifices are not unusual.

It’s only a matter of time before they become more common place here.