Here’s a classic. Let’s start with the ghoulish display of sorrow over the body of a dead boy, allegedly killed by Israeli bombing. It’s aimed right at the heart of  someone like Annie Lennox who, upon seeing bombs falling on Gaza, immediately imagines Palestinian babies on the receiving end, rather than Hamas militants targeting Israeli babies. And, of course, the news media snatch up the photo-op. 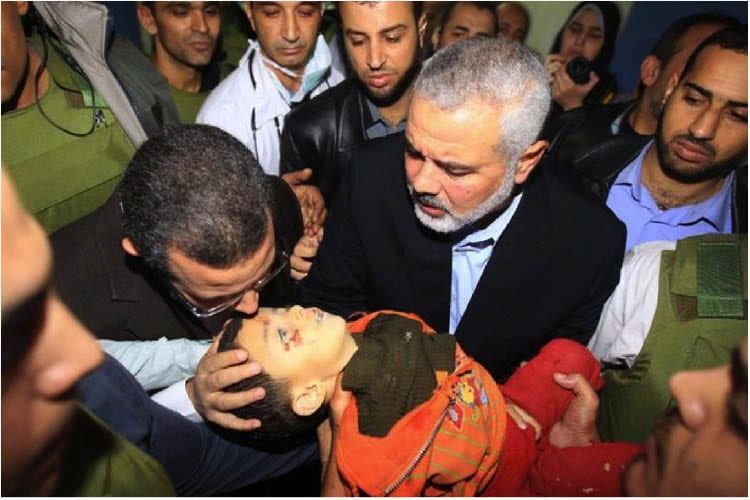 Haniya and Egyptian PM Kandil mugging for the cameras 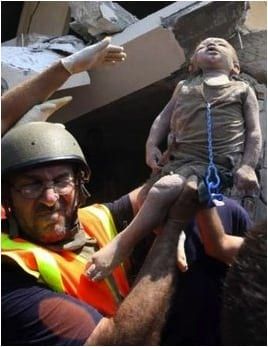 And, of course, the media run with the story. It’s all so obvious. Boy dead from explosion, Israelis bombing Gaza. As the Palestinian “general” in charge of the investigation of Al Durah’s death put it, “there’s no need to investigate when we know who did it.” 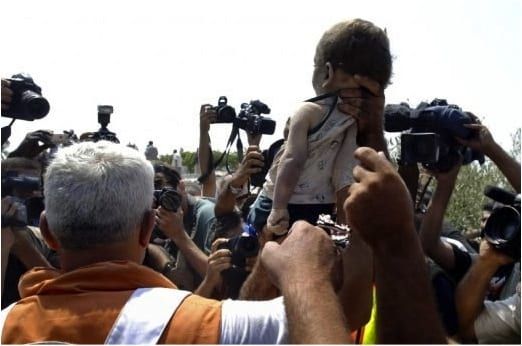 But wait, what about the evidence, asks Elder of Baker Street?

Jodi Rudoren, who for all her flakey early noises when she was assigned the Middle East beat by the New York Times shows some signs of independent journalism, writes:

Israel vehemently denied involvement, saying it had not carried out any attacks in the area at the time. Gaza’s two leading human rights groups, which routinely investigate civilian deaths, withheld judgment, saying they were unable to reach the area because of continued danger.

Mahmoud’s family said the boy was in an alley close to his home when he was killed, along with a man of about 20, but no one appeared to have witnessed the strike. The area showed signs that a projectile might have exploded there, with shrapnel marks in the walls of surrounding homes and a shattered kitchen window. But neighbors said local security officials quickly took what remained of the projectile, making it impossible to verify who fired it.

We’ve seen this scenario before. In the summer of 2006, most of the Ghalia family were killed in an explosion on a Gaza beach. The Palestinians, with the help of dramatic but dubious footage of the young daughter, meandering in wild grief among the wreckage, fooled the western news media, who immediately broadcast their claim that the family, while relaxing on the beach, was shelled by Israeli naval ships. Classic Pallywood. Evidence piled up that the Israelis had not been firing there, that the hole caused by the ordnance did not accord with an Israeli shell, that despite claims to the contrary, Palestinian sources and their unofficial spokesman, Marc Garlasco of Human Rights Watch, had no ballistic evidence of what caused the explosion. When it came time to send two of the youngest victims to Israeli hospitals, and at risk to their lives, the doctors hastily removed the shrapnel from their bodies.

In this case, however, journalists begin to show some signs of forensic awareness. To be fair, she to us, and we to them, both the NYT’s Jodi Rudoren and AP’s Karen Laub actually mention the anomalous evidence: the explosion was too small to have been fired from a plane; the clean-up crew visited the site before the journalists.

This is obviously a huge step forward over the Guardian’s Suzanne Goldenberg’s appraisal on October 1, 2000, of the wall behind barrel that Muhammad al Durah and his father had hidden behind, the previous day. 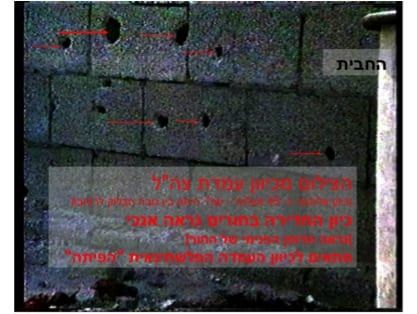 Told that the Israelis had fired “bullets like rain” for 40 minutes until they killed the boy, Goldenberg looked at the dozen or so bullet holes that looked suspiciously like they were shot from “head on,” rather than the 30% angle an Israeli bullet would have to travel to leave marks on the wall, and pronounced the cluster “proof that the Israelis had targeted the boy.”

Apparently, now, almost thirteen years later, some journalists have at least problematized the Israeli-Goliath/Palestinian-David framing story: maybe that doesn’t cover all the cases. It is, after all, a journalistic task to give us the relevant evidence. Obviously more investigation is called for, but thanks for the allusive scraps. Those who argued that Israel should have let journalists into Gaza for Operation Cast Lead (OCL) in 2008/9, because they would have provided quality control over the kind of footage that would come out of Gaza from unsupervised Palestinian “journalists,” have evidence for their claim in this kind of reporting.

Similarly, watchdog groups like NGO Monitor have read the riot act even to Palestinian NGOs, notorious for their anti-Israel advocacy brand of “human rights” defense. Notes Elder of Baker Street

The Palestinian Center for Human Rights , which is keeping track of everyone killed in Gaza (and which admits that most of the dead have been “militants,”) did not list Mahmoud Sadallah or Aiman Aby Wardah in their list of victims of Israeli airstrikes, although they even include one person who died of a heart attack.

Omerta? Possibly. Probably, if it were a Hamas explosive. How many journalists or readers even think of the role of intimidation in shaping the news they get?

And yet, another datum corroborates this hypothesis: Laub informs us that “local security officials quickly took what remained of the projectile.”

Two questions: 1) Are we sure it was all “projectile”? What if part of it was the mangled body of a rocket launcher that blew up on the launchers, killing the neighbors, including the four-year-old boy?

2) Does one imagine all these cleaners did was run in, remove the item(s) in question, and leave without also informing those watching them not to speak about the event? Indeed, I wonder who was the brave person who reported about the clean-up crew.

Implications for the Cognitive War

Meditate on the picture:

Here is the head of Hamas, whose boys systematically fire from the midst of civilians — in order to create civilian casualties they can then blame on Israeli counter-strikes — exploiting a death directly caused by his men, in order to appeal to western sympathy. It would be hard to imagine a more stunning portrait of the most depraved hypocrisy (and contempt for viewers who believe this display of compassion).

It is hard to imagine a more grotesque expression of a mutual corruption: trying to demonize your enemy before an outside audience whom you expect to side with you in the name of empathy for the very children you victimize. How disordered the emotional and moral world of the masterminds of this kind of manipulation must be.

Not only that, but Haniyah dragged into this humiliating display the prime minister of Egypt’s new “Muslim Brotherhood” government, trying to show support for the Palestinian branch, Hamas. Prime Minister Hesham Kandil jumped right in, kissing the baby, and subsequently testifying (in what BBC correspondent Wyre Davies found to be a “powerful statement”) that “his blood is still on our clothing.” Kandil is a fool eagerly trying to join in the morbid circus Haniyah and Hamas so frequently stage. Haniyah, thinking he could get away with it, has dragged Kandil into this shameless pornography of death.

One last reflection: Hamas’s strategy has long been to attack from behind civilians to provoke Israeli retaliation and then use the collateral damage of those victims as a way to blame Israel. This is in fact a key element of their asymmetrical war with Israel. As one Gazan explained to an Italian reporter towards the end of Operation Cast Lead (OCL):

The Hamas militants looked for good places to provoke the Israelis. They were usually youths, 16 or 17 years old, armed with submachine guns. They couldn’t do anything against a tank or jet. They knew they were much weaker. But they wanted the [Israelis] to shoot at the [the civilians’] houses so they could accuse them of more war crimes.

In other words, Hamas engages in the exceptionally rare wartime act of actively victimizing one’s own civilian population – specifically a war crime – in order to win a victory in cognitive war.

And they can only do so if a corrupt media on the scene (including NGOs and UN agencies), rather than expose their criminal strategies, play along and present the images of dead babies in the framework of the Palestinian narrative of Israeli victimization. The fact that Hamas thought they could clean up the scene and pull off a Gaza beach, successfully blaming the Israelis for the tragedy, speaks eloquently of their exceptionally low appraisal of the forensic acumen of the western press.

And they have good reason to so believe. After all, Goldstone, in his investigation into the abuses of the Palestinian people during OCL, never once looked into this kind of human shielding. Imagine if he had!

Alas. It’s hard to believe that if the press had learned the lessons of al Durah they’d still be suckered by this kind of display.

Now meditate on this picture, provided by Electronic Intifada to weaponize the tragedy against Israel. 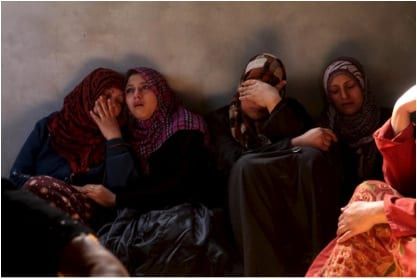 Richard Landes is a Professor at Boston University in history. He has just come out with two books: Heaven on Earth: The Varieties of the Millennial Experience and The Paranoid Apocalypse: A Hundred-Year Retrospective on The Protocols of the Elders of Zion. He blogs at The Augean Stables.
Read more by Richard Landes