The Biggest 'Non-Discovery' on Mars in History

Just how big was this week’s “discovery” of water on Mars?

Not as big as one might think from all of the hype about it, at least in terms of discovering water. We’ve known for many years as a result of numerous Mars orbiters and landers, going all the way back to Viking, that there was water on Mars. For instance, it was measured as vapor in the atmosphere back in the seventies by the Viking orbiters. While the ground can occasionally get as warm as room temperature, the Martian atmosphere is frigid, never getting above zero on either the Fahrenheit or Celsius scale.

But even at that temperature, because the atmosphere is so thin and low pressure, liquid water can’t form — it would quickly boil away, even in the chill — so it has always been assumed that it exists only as vapor in the air, or ice. In fact, at the low pressure of Mars, all ice, including water ice, is “dry” ice (as carbon dioxide ice is here on earth), in that it goes directly from solid to gaseous form without becoming liquid first, a process called sublimation.

The Martian rovers gathered a lot of evidence that Mars was once a very wet place. But the question still remained: how much water was left?

The data continued to accumulate. It was a quite certain, three years ago, that the European Mars Express had taken a picture of a large patch of water ice in a crater: 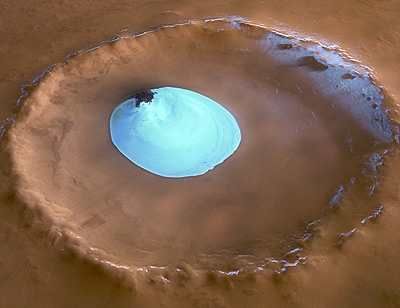 This white patch is present all year round, as the temperature and pressure conditions do not favor the sublimation of water ice.

It cannot be frozen carbon dioxide since carbon dioxide ice had already disappeared from the north polar cap at the time the image was taken (late summer in the Martian northern hemisphere).

Not convinced? Remote observation from orbit not sufficiently definitive? Well just a little over a month ago, the Phoenix lander itself “found proof” of the presence of ice just below the surface.

There’s been little doubt in anyone’s mind for quite some time that there is water ice on Mars. The only issue was how much was there, and whether or not it was easily accessible.

So what was the big deal with this week’s story? It was a first, just not the first “confirmation” of water. It was the first time that a probe (in the words of one of the principal investigators) had “touched it and tasted it.” At least, as much as an inorganic device can “taste” anything at the current state of technology. For decades, we’ve been sending electromechanical emissaries out to our sister worlds in the solar system, extending our eyes and ears, and in some cases, hands, but this is the first time we’ve sent a tongue.

Now that they’ve confirmed the expected presence of water, long believed to be an essential ingredient for life, the search for life itself within that water will begin. They won’t expect to find things swimming around in it (though if they did that would be the biggest find in the history of space science to date). And as I’ve noted previously, prospective Martians currently living on earth should hope that they don’t, lest the planet be quarantined from humans to prevent contamination.

What the researchers will be looking for are chemical precursors to life, such as amino acids that form proteins. If they find them, it won’t prove that there is now, or ever was life on Mars, but it would increase the probability of it in many minds.

But assuming that they don’t discover little Martians, the most significant thing about this mission, to my mind, is what it tells us about the abundance of ice on the Red Planet. Either the lander was extremely lucky, and hit the lottery, or almost anywhere that it sat down, at least on that plain, would have been on top of ice. If you drop a rock from orbit and it lands in the water, Occam’s Razor would say that it’s much more likely that you landed in a lake or sea, than that you landed in a puddle in the middle of a desert.

So now we know that there’s not just ice on Mars, but a lot of it, close to or (as in the case of the glacier in the crater) on top of the planet’s surface. That means that, assuming the absence of native Martians, Mars has become a much more attractive location for the establishment of earthly life. That knowledge will help in the refinement of plans for settling the planet in a self sufficient way, whenever those who wish to do so can somehow raise the money to get there.