Our local all-candidates debate took an interesting twist on October 8 when Michael Moore came crashing in unexpectedly with his camera crew in tow.

The candidates were Canadian citizens, contesting a Canadian election on October 14 for the riding — what Americans call an electoral district — of Sault Ste. Marie, a city of 75,000 hidden in the vast northern Ontario wilderness.

Sault Ste. Marie is my hometown. Which is why I was at the debate.

What I don’t understand is why Michael Moore was at the debate.

Why was a controversial American filmmaker so interested in our local election when the U.S. is in the final stages of its own campaign?

That’s what I was determined to find out.

Moore would not tell me.

He said only that he was producing a movie, under two hours, in color, and that he does not comment on films in production.

Two members of his production crew refused comment and one refused to give me his name.

The unnamed crew member did object, however, to me calling him an American.

“I’m a U.S. citizen,” he said, adding that like Canadians he lives in North America.

So I asked the next logical question to come to mind: Why is a U.S. citizen up in Canada taping a small-town all-candidates debate at the local college?

“I don’t want to be interviewed,” he said.

For a public figure who has made his reputation confronting other public figures when they least expect it, Moore and his camera crew came across as camera shy when I attempted to interview them on the record.

Finally, Moore’s camera man, a tall, clean-shaven fellow with bushy brown hair who identified himself as John Walter, revealed the big secret: Moore was taping a new movie contrasting Canada’s political system with that of his home and native land.

What he didn’t say is that as part of the taping, Moore would spend 90 minutes after the debate knocking on doors with Tony Martin, the incumbent member of Parliament for Canada’s socialist New Democratic Party.

Local polls suggest that Martin is in a tight race to hold onto his seat.

Conservative candidate Cameron Ross has mounted a credible challenge for a party that typically places a distant third in our riding.

Yet for someone who was simply an American observing the action, Moore would publicly criticize Ross — who was born and raised in a farming community just outside of the Sault — for declining a post-debate interview.

“I don’t know why he didn’t stay,” Moore told local media. “Maybe he was hungry. Conservatives get hungrier easier I guess.”

The candidate’s campaign manager offered me a different guess.

Ross is a family man who was celebrating his twentieth wedding anniversary, said Ian Shields.

Thus Ross wanted to spend the evening at home with his wife, whom he had not seen much of throughout the campaign, and whom he was unlikely to see over the weekend owing to last-minute preparations.

Yet some of Moore’s local fans refused to accept family obligations as an excuse.

They accused Ross of cowardice.

Ross is no coward.

The Conservative candidate is a full colonel and former artillery officer, who has served Her Majesty the Queen honorably for 31 years as a member of Canada’s armed forces.

Ross has fought alongside our American allies in foreign theaters and commanded an entire brigade. (Full disclosure: I am currently a reserve second lieutenant with Ross’s former regiment, but have never served under his command.)

To critique Ross’s ideology and campaign strategy is one thing. In fact, I do it all the time as a political pundit with our local media.

However, it is quite another for a foreigner to come to our country and mock a man who has donned the uniform and risked his life in the service of country and freedom — including my freedom to publicly criticize his campaign performance.

Ross is a man who, while dodging bullets in trenches, has on many occasions gone hungry so that his soldiers could eat.

In fairness to Moore, the documentary filmmaker was just as sarcastic toward his own country when interviewing the other five candidates after the debate.

Standing next to Marxist-Leninist candidate Mike Taffarel, Moore marveled how none of the other candidates felt threatened by Taffarel’s participation in the debate. 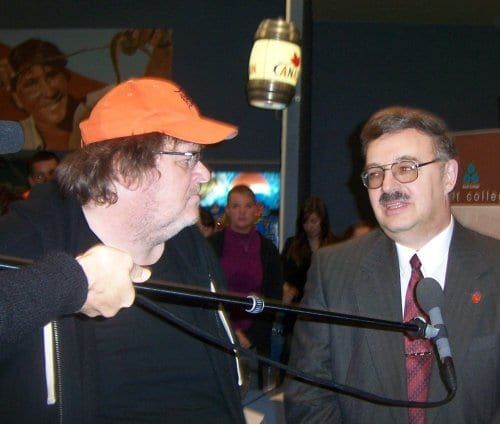 Moore then asked the other candidates whether they felt like calling the Department of Homeland Security.

Moore also requested the candidates speak in simple terms when answering his questions, because he was trying to explain the Canadian electoral system to Americans — did he mean U.S. citizens? — who “have a hard time understanding how to vote themselves.”

After interviewing each of the local candidates except Ross, the Sault media asked Moore which candidates he would cast his ballot for if he could vote in the local Canadian election.

Undecided, he complimented each of the candidates except the Conservative.

However, he excluded the Conservative candidate as a possibility.

[Elsewhere in Pajamas Media: Watch an interview with Pete Vere on PJTV]

Pete Vere is an author, blogger, and journalist who splits his time between northern Ontario and the Michigan Upper Peninsula. He and Kathy Shaidle recently coauthored The Tyranny of Nice, a book on the Canadian government's suppression of free speech, which includes an introduction by Mark Steyn.
Read more by Pete Vere
SHOW COMMENTS