A couple of months ago, Rep. Darrell Issa (R-CA) sent a letter to Earl Devaney — chairman of the Recovery Accountability and Transparency Board — demanding an investigation into the cost of signs touting the so-called American Recovery and Reinvestment Act.

One of those signs at Dulles International Airport cost taxpayers $10,000.

On Monday, the Washington Times reported that the inspector general tasked with investigating those signs — and the language requiring the use of those signs in nine Housing and Urban Development (HUD) programs — has returned a report. 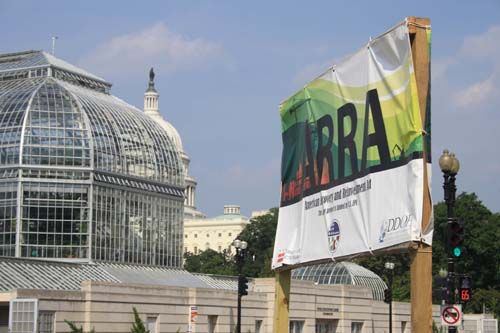 PJM reported back on July 5 that language in HUD documentation seemed to require the use of the signs, which Issa and others have termed “propaganda.”

The IG’s report states that while language requiring the use of the signs was removed from agency-wide guidance issued by HUD, the language was still pressuring:

The language used in the published guidance states that it is not a HUD requirement to post signs, [but] the tone and other information (such as examples of sign templates) were clear indicators that posting signs was preferred. Further, an earlier e-mail from the Deputy Press Secretary stated that the posting of signs was highly recommended.

Issa said this is a clear indicator the IG has agreed with his position on the signage and that the language is a “veiled threat.” The language “highly recommended” all but forces contractors to put up the signs, he said:

It’s as close to an order to do it or not get funds as you can get.

Getting the first IG report back is a start, Issa said, but he doesn’t expect any major changes out of this:

It doesn’t change a thing, just gives us an answer, which is more than we get sometimes from the administration. … You know when you’re in the minority and the administration doesn’t have to listen to you, the most that you can really do is try to convince them of the error of their ways. … In this case overtly political, bordering on illegal if not illegal propaganda is behavior we’d like to see changed. The most important thing we’re trying to do is to get the administration’s recognition that what might go on in Chicago and what might go on in the private sector, for that matter, is inappropriate and illegal in the public sector.

Robert Gibbs when he was asked about these signs in a press conference said these are transparency provisions and we are being transparent in how we’re spending stimulus money. … And that’s a pretty weak leg to stand on, and this completely kicks out that leg because this is an independent watchdog within the Obama administration ratifying our premise that these signs are being put up, whether implicitly or explicitly, to remind voters that Barack Obama is the one spending their money and as Mr. Issa said, that’s illegal.

This is just an in-your-face sign of the way the Obama administration does business. And as we know, it’s doing that business with other people’s money.

Issa believes the signs are overtly political and aimed at the November midterms. He wants it to be clear they are misleading:

No one item changes the voters’ minds, but the idea that when they see these recovery signs that are very often placed on what taxpayers have paid other money for … you have a large amount of signs — and those signs are very positive to the Obama midterm reelection.

Issa also notes the value of the signs far outweighs the actual cost. The placement of some of the signs would be worth tens of thousands of dollars a month if used as advertising billboards — including the $10,000 sign at Dulles and another on Interstate 395 around Washington, D.C.

In both cases, Issa said, the signs have been up for months with no work done:

The real problem for the voters to understand is these signs are worth hundreds of millions of dollars in advertising value.

Issa further said the various inspectors general have gotten fairly good cooperation in this investigation, but that’s by no means a given.

Issa said House Republicans have had to push and prod to get subpoena power for inspectors general. Currently only IGs in the Department of Defense have the power to issue subpoenas:

It’s not past the Senate yet. … In most cases they get cooperation, but when they don’t they’re pretty powerless.

Estimates of the total cost to the taxpayers for the signs range from a few million to tens of millions of dollars, and Issa has requested a total cost of the signs — which Rep. Aaron Schock termed “the height of narcissism” in July. Issa does not, however, think that cost will ever be known due to a number of factors, including prices which vary wildly from state to state: