Is an Obama Landslide in the Oregon Mail?

A record turnout of 38% of all ballots were already cast in Oregon by noon on Monday, as the only all vote-by-mail system in the nation swung into action a day before the actual election. Ballot boxes in downtown Portland’s Pioneer Courthouse Square were in heavy use during the lunch hour. This was the first primary in decades where Oregon’s (pronounced Or-eh-gun by locals) voters have impact on the national resulted in unprecedented registration. So many last minute registrations were submitted that many voters are receiving two ballots, only one of which will be counted. 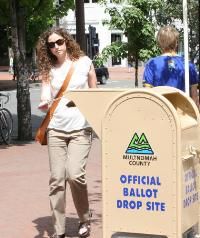 Oregon’s (pronounced Or-A-GONE by twits) unique vote-by-mail system is made possible by a strong culture of independence. In the last decade voters have voted overwhelmingly for strong death with dignity and against same sex marriages, issues on opposite ends of the liberal-conservative divide. Most tellingly, Oregon voters get irritated over issues that are rammed down their throats in undemocratic ways. In the last year Portland Mayor Tom Potter’s attempt to change by fiat the name of Interstate Avenue to honor Cesar Chavez without a vote was derailed by community activism. The kinds of voter fraud rampant in Wisconsin and Illinois in 2004 are much less tolerated here because political machines would be ground up by irritated voters. The initiative and recall were invented in Oregon, and citizens here hate getting their power subverted by authorities. 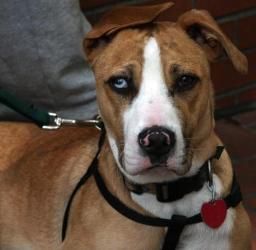 In Portland, even the dog’s ears skew left!

How this will play out for “anointed” Democratic nominee Barack Obama remains to be seen. The black community in Oregon is less than 5%, smaller than the Gay, Lesbian, Bisexual, and Transgender community that has been largely ignored by the Obama campaign. Barack Obama has yet to be interviewed by a gay newspaper (of which Portland has two), an omission that could be costly in Oregon’s thriving GLBT community.

Some people came all the way up from California to campaign for Hillary. Apparently they were unclear that all ballots people held were inside two sealed envelopes and unalterable. Campaigning near a ballot drop site is silly, but Oregonians expect that from Californians. What surprised the out of state volunteers was the way lawn signs for Hillary disappeared overnight. Unauthorized volunteers removed Clinton signs from other people’s home’s as their way of supporting democracy through vandalism and theft.

Campaigning on Monday for Hillary Clinton outside of the Willamette valley in Southern Oregon, “Ugly Betty” star America Ferrera was modest in her own potential to influence voters. Well-briefed on Oregonians, though, she pointed out our desire to participate in the national choice of candidates. It remains to be seen if a majority of Oregonians are tremendously excited about applying a rubber stamp for Barack Obama. The small cities of Medford, Grants Pass, and Klamath Falls are more conservative and host a growing Hispanic population; sending America Ferrara was genius.

Inside Multnomah county Elections Division offices the preparations for tomorrow night’s count were already underway. Signature verification, ballot sorting (into precincts), automated envelope opening, ballot preparation, and ballot review are proceeding in preparation for Tuesday night’s counting. Signature verification is one of the steps taken to detect voter fraud. Voter registration signatures are compared with the signatures on the ballot. (In 2004 one false positive was detected when a father and son with the same name registered as incorrect signatures.) Another part of preventing voter fraud is the party observers watching the entire process. On Monday afternoon no party observers were present, but this primary election isn’t about inter-party disputes. In the general election in November, the Republican enthusiasts and the Democratic lawyers will be thick on the ground. 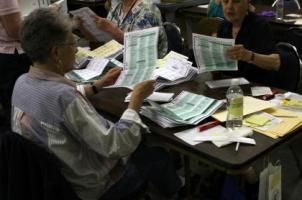 The election workers are probably the heart of why voter fraud does not work very well in Oregon. Teams of older people, carefully assembled from both main parties, handle all the ballots in the open in a manner reminiscent of a giant quilting bee. Focused work and shared communal activity in the open between folks committed to seeing democracy work functions. When a questionable ballot is found, it is set aside for closer study. Election workers are allowed to clarify voter intent, usually mistaken double marks. It is all very civil, professional, and transparent…the way democracy is supposed to work. 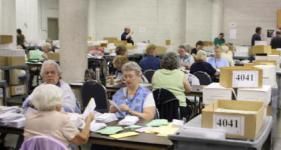 The Oregon Quilting Bee of Democracy

Before going out and talking to people, it looked to me like Obama was going to take Oregon in a walk, and he still might. Some things I discovered indicate to me that this might be harder. The lawn sign theft is the kind of thing arrogant jerks in Oregon do that really irritate the hell out of other Oregonians in ways that get them to get out the vote. Hillary very well may win Oregon because the vandals took Obama’s side. That record numbers of Oregonians are voting is not a good thing for somebody who claims to have the election in the bag. Oregonians hate getting ignored, the Obama campaign really wanted to be ignoring Oregon right now, and everybody knows it. Oregon is a red state with a blue colony.

That America Ferrera is campaigning for Hillary in places that don’t get to see TV stars all that often is quite possibly enough to bring in the red state part of Oregon in ways Obama did not match. Obama very well could get washed out in a spring flood of Oregon voting.

Patrick Lasswell lives in Portland and blogs at Moderate Risk