This Wednesday morning, August 20th, as the sun lit up the spires of bombastic Stalin-era high-rises in the heart of Russia’s capital, residents of a historical downtown district noticed a large flag of Ukraine fluttering over one such spire, atop a large golden star. 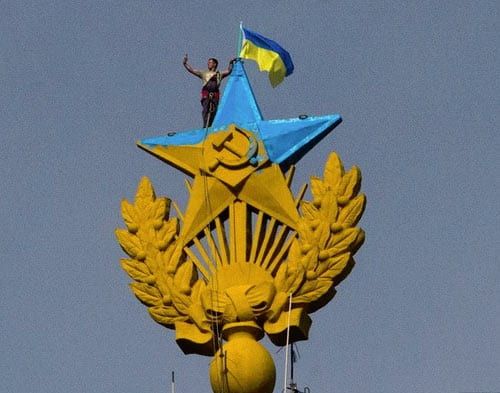 The top of the star had also been repainted light-blue to resemble the Ukrainian flag (the original hammer and sickle emblem in the middle remained unharmed, though). A resident of a nearby building was able to catch the perpetrator on camera as the man completed his stunt by jumping off the 560 foot tall spire with a parachute and disappearing in the pre-dawn emptiness of the city.

It’s hard to say what was more daring: to risk a deadly fall during the stunt, or to deface the iconic Stalinist spire, which continues to symbolize Russia’s imperial ambitions — and to raise the blue-and-yellow “enemy” flag over Moscow at a time of war, when all of Russia is seething with anti-Ukrainian anger as the official propaganda continues to whip the crowds into a supremacist frenzy by comparing its aggression against Ukraine with the “Great Patriotic War” against Nazi Germany.

Hatred of all things Ukrainian in today’s Russia is universal — it extends from Ukrainian-made chocolates to Ukrainian music and Ukrainian people, who are now called by a newly invented ethnic slur “ukrop,” which translates as “dill” — with the dehumanizing implication that Ukrainians are nothing more than vegetables destined to be chopped into salad.

A special kind of hatred is reserved for the emblems of Ukrainian statehood, which symbolize the country’s independence from the imperial Big Brother — the historical blue-and-yellow flag and the tryzub — the ancient ornamental trident from the times of Kievan Rus — which today’s Kremlin propaganda absurdly compares to the swastika.

Under these circumstances, falling into the hands of a frothing supremacist mob might be not much different than falling from the top of a Stalinist spire.

According to Moscow police, a group of perpetrators had apparently sneaked into the building at night through a service entrance and climbed up the service stairs to the roof unnoticed. They must have been also carrying a large flag, a load of spray paint cans, and climbing equipment which they used to scale the spire and get on top of the star.

The authorities declared a citywide manhunt for anyone seen carrying mountain-climbing equipment. The hunt resulted in the detention of four local residents — two men and two women in their mid-twenties — who are denying their involvement. In the meantime, a Russian blogger disclosed the name of the daredevil as Grigory — a young man from Ukraine who engages in the extreme sport of “roofing.” He is known on  Facebook and Twitter as Wanted Mustang and has a website filled with vertigo-inducing images of himself standing or hanging from the highest points of buildings, bridges, and spires around the world. 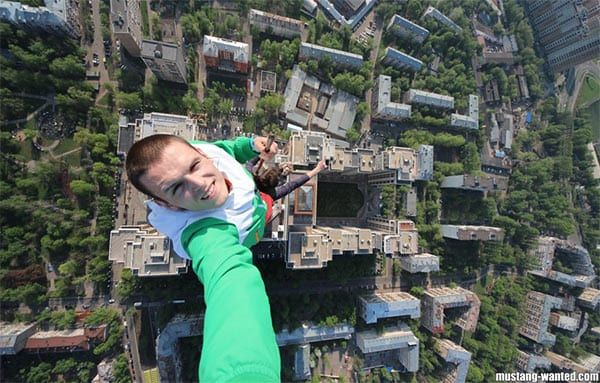 “This young man walked the streets of Moscow in a T-shirt with the Ukrainian coat of arms. He is quite famous in the ‘roofer’ circles. He is a citizen of Ukraine. I met him Saturday by accident, he said he wanted to take a walk on the roofs of Moscow, pay a visit to the Stalinist high-rises, and climb on top of the star because it must be beautiful up there,” wrote the blogger, adding that Grigory supports Ukraine’s fight against the Russia-sponsored separatists and is thinking of joining the volunteer army in Kiev.

On his Facebook page, Grigory wrote that he had already been to the war-torn eastern Ukraine in April to videotape the fighting for a Ukrainian TV channel, admitting that the body armor he was given turned out to be too uncomfortable and so he traveled without it.

Earlier this year Grigory also took part in the Maidan revolution in Kiev. One night he climbed the spire over the rallying crowds to fire a colored flare to boost the morale of the protesters (see photo below): 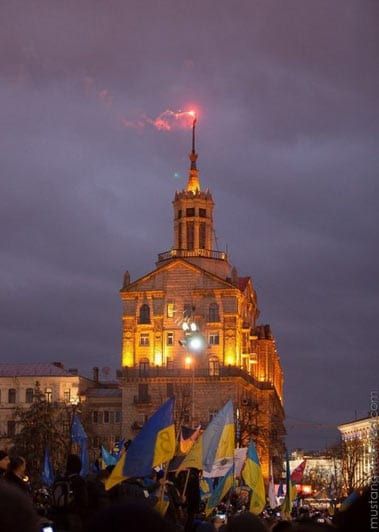 By 8:30 am Moscow time, as the hunt on mountaineers in Russia’s capital continued, a team of climbers from the Ministry for Emergency Situations of the Russian Federation arrived to remove the flag from the spire and to repaint the star with the original golden paint. The Ukrainian flag over Moscow flew for about three hours.

The timing of this action was not coincidental. This Sunday, August 23, is Ukraine’s Flag Day, which is also the celebration of the country’s independence from the USSR, obtained peacefully in 1991.

As Ukraine’s President Petro Poroshenko urged all citizens today to hang the national flag in their homes, offices and their cars, he also mentioned the action in Moscow this morning. “I appreciate that on this day, even Moscow’s greatest skyscraper was repainted in our colors,” Poroshenko said. 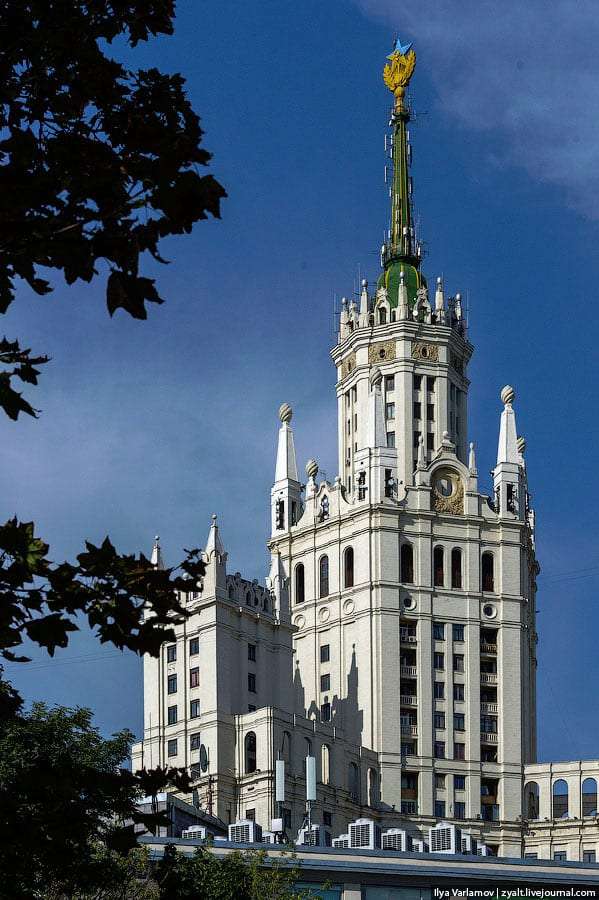 A group of anti-war activists in Moscow, Committee for Solidarity with the Maidan, are also planning a day pro-Ukrainian action this Sunday, urging Muscovites to color their city with yellow-and-blue flags.

A member of the group, Pavel Shelkov, writes: “Actions of the brave climbers from the Moscow chapter of the Right Sector on the eve of Ukrainian independence seem to have launched a new popular anti-war campaign – decorating our capital with Ukrainian flags. On August 24th, let’s wave Ukrainian flags in public places and attach them to cars, pin small Ukrainian flags and ribbons to our cloths, and paint flags of Ukraine where appropriate.”

Earlier this month the group held a public vigil in Moscow, remembering the victims of Russian aggression in Ukraine, after the authorities rejected their request for an anti-war rally.