GM Is Alive. Drivers Are Dead. Any Questions?

Remember the arrogant 2012 bumper sticker based on Joe Biden’s boast at the DNC? “GM is alive. Bin Laden is dead. Any Questions?”

It now appears that many American civilians with absolutely no connection to al-Qaeda have also become dead or injured while driving a small, fuel-efficient Chevrolet Cobalt, Pontiac G5, or Saturn Ion.

An investigation into General Motors’ failure to recall millions of small cars containing a deadly ignition switch defect found a corporate culture in which employees failed to take responsibility for the problem, which has been linked to at least 13 deaths, said GM chief executive Mary T. Barra.

This raises even more questions.

Notice the part about “a corporate culture in which employees failed to take responsibility for the problem.” Was it because the employees knew that they were too big to fail?

How many of them were members of the United Auto Workers? Obama had rewarded this labor union’s political shenanigans and donations to his campaign with 39 percent of General Motors. That alone should have taught the GM employees a lesson that real money comes not from actual labor but from shady political dealings, and that honest work is for suckers.

General Motors waited more than a decade to recall their 2.6 million defective small cars worldwide. Obviously, the problem started long before the Obama administration decided to bail them out, thus rewarding bad behavior and costing Treasury a loss of roughly $10 billion.

That was yet another real-life lesson from which the GM employees could learn that withholding information is better than honest work, and that those who actually do honest work wind up paying for those who don’t. Now GM is going to establish a compensation program for the victims and their families. How much of that cost will be covered by a taxpayer-funded bailout?

And now for the final question. Using the GM chief executive’s own language, who built that “corporate culture in which employees failed to take responsibility for the problem”?

According to her boss, the nation’s chief executive, no one in particular. In President Obama’s mind, businesses just happen to grow and develop their own cultures, like fungus. No one takes credit for a fungus culture; why should anyone take credit for a business culture? Whether you succeed or fail, the administration’s credo is, “You didn’t build that!”

GM officially confirms up to 13 deaths; trial lawyers are likely to raise the number to 60. Is that a fair cost of keeping GM alive? If so, how many lives and billions of taxpayer dollars will it take before the cost of this administration’s meddling with the economy becomes prohibitive? At what point will it stop being fair and become criminal?

Ayn Rand’s prophetic novel Atlas Shrugged has a chapter in which hundreds of people on a crowded train lose their lives because railroad employees have stopped taking responsibility for their actions. Their failure to take responsibility was a consequence of the nation’s new culture of “fairness” and “equality” that was being promoted by an intrusive “progressive” government. In a twist of dark irony, all the participants in the story were fully supportive of that “fair” culture — from the corrupt government officials to the cowardly railroad executives to the clueless passengers who never figured out what had doomed them to die in a smoke-filled tunnel.

It seems that today the Obama administration, the “progressive” politicians, the unions, and all their low-information supporters, many of whom are driving GM’s small, fuel-efficient cars, are writing an updated, real-life version of Atlas Shrugged, in which the story of General Motors is the latest contribution to this man-made dystopia. 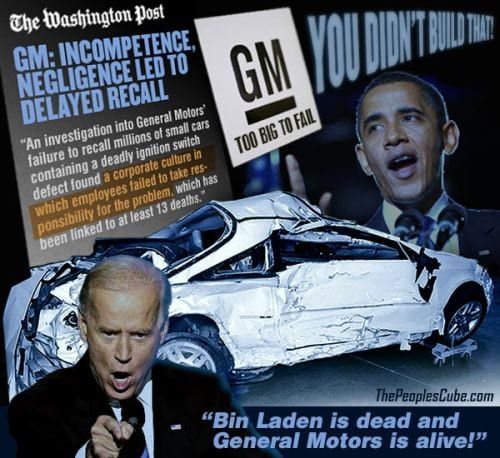