Mr. Gorbachev, Tear Down Half This Wall

As all principled Democrats are pounding their uncompromising collective fist on the GOP’s big tent, demanding that conservatives compromise their principles, and even Colin Powell has joined their unanimous opinion about the glaring lack of diverse opinions among Republicans, conservatives are clearly left with no other choice than to move their big tent down from the moral high ground to where the progressive majority is, so it can be better monitored by the media and have easy access for morally disabled persons with diverse opinions.

Everyone knows that this country was built by great moderates who made history by compromising their ideals and principles. So let us take a moment and look back at great compromises throughout history. This is now the correct narrative. Please update your past.

The great compromiser Ronald Reagan was always careful not to offend people. In June 1987 he famously issued the following moderate, inoffensive statement: “Mr. Gorbachev, tear down half this wall.” This made everyone happy and didn’t drive moderates out of the party, which could have happened if he were to make a more categorical demand. Fearing he would alienate centrists, Reagan also changed the original characterization of the USSR as “the evil empire” to a more moderate “misunderstood commonwealth,” for which he was forever extolled by the White House press corps.

In 1862, another Republican president, Abraham Lincoln, was also working hard to reach a middle ground between pro-slavery and anti-slavery factions in his party. Aware of the need to get along and compromise on sensitive issues, Lincoln issued the Emancipation Proclamation, in which he gave slaves freedom from 9 a.m. to 5 p.m. on weekdays, after which time they needed to return to their masters.

In 1773, a group of about 200 agitated Bostoners, some wearing Native American costumes and whooping war chants, marched two by two to the wharf, descended upon three ships, and dumped half of the crates with tea into the harbor. The rest of the crates they took home, forming a long line at the customs house to pay the proper tax set by the British crown. Most colonists applauded their compromise and it didn’t antagonize London enough to pass the Intolerable Acts, which might potentially close the Port of Boston.

In October 1492, when Christopher Columbus discovered that the trip was taking longer than expected and his sailing associates began to threaten him with mutiny, Columbus reached a compromise with the sailors’ union representative and the ship community organizers by promising to turn back if land was not sighted in five minutes, on condition that they wouldn’t tell anyone. The land would’ve been discovered the next day, but maintaining good relations with the sailing community was a much more important objective. Upon their return, Columbus and his associates told people that they had reached a bountiful shore but they didn’t bring any proof of it because they felt it would be wrong to engage in trade and corrupt indigenous cultures with Western-made trinkets.

One can find many examples of great compromises between right and wrong in the Bible. In the year of 33 AD, Jesus famously drew a line in the sand and suggested, “Let he who is without a Class 1 felony or who hasn’t been arrested within the last five years and has no pending warrants cast the first stone.” Mary Magdalene was subsequently stoned to death, but the needs of the many prevailed in this textbook example of a graceful compromise that met the demands of the larger community. 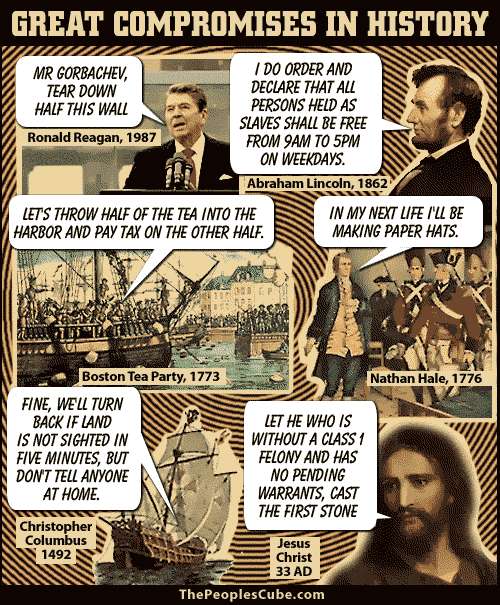 Realizing that the road to political fortune is paved with principled compromises, today’s Republicans have long ago abandoned the concept of “small government” and are instead calling for “smaller government,” which means that if they ever reduce the government’s consumption of the GDP from 20% to 19.99%, they can declare victory and call it a day.

Unfortunately, not all Republicans are willing to open their minds to the numerous opportunities of getting along and compromising their principles in a graceful and acceptable manner. Opponents of abortion, for example, could find an easy way out of their unpopular stand by accepting socialized medicine, which will inevitably make the lines so long that by the time a pregnant woman reaches the top of the waiting list, her baby is already 18 months old and no political harm is done to any of the parties.

It is high time everyone in America understood that only by being moderate and sacrificing our principles to the greater good can we maintain a more average union, improve the Constitution with an equal proportion of negative and positive rights, and fulfill the promise of the Bill of Permissions, which entitles all men, women, and transgendered persons to existence, compliance, and administered satisfaction.

Only then can we collectively live up to the vision of American forefathers — a moderately illuminated urban environment on a slope. 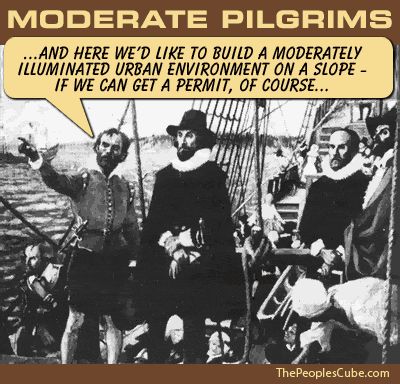 This piece was written together with Bryan McCarthy, who is also a regular contributor to the People’s Cube.