Poor Joe Biden! Our vice president has been reduced to a hot dog vendor on Comedy Central and been unanimously anointed by the media as “most likely to be booted” from Obama’s 2012 ticket.

Let’s assume for the sake of this column that Obama walks Biden down the 2012 offramp.

Now don’t feel too sorry for lovable ol’ Joe, because chances are he’ll land a big fat TV contract on MSNBC for a new show called Evening Joe, which will earn higher ratings than Morning Joe.

Or perhaps Biden will be the next Johnny Carson, replacing Jay Leno.

So with Joe down the tubes but on the tube, all the collective media wisdom will point to Hillary in the VP slot because “Obama needs her to win,” or so the story goes.

I’m of the belief that Hillary would reject Obama’s VP offer because she informally held that job for eight years back in the 20th century, and Hillary is the kind of gal who only moves forward.

Which leads me to predict that President Obama will tap Virginia Senator Mark Warner to be his 2012 vice-presidential running mate. 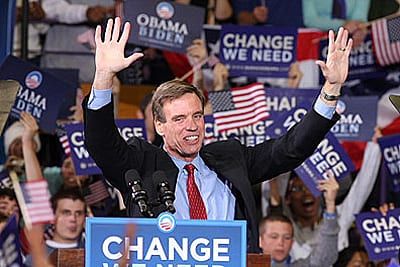 Warner stumping for Obama in 2008.

There are numerous reasons why Warner would be an asset to Obama.

For starters, Warner is everything Obama isn’t — a political moderate, a former governor, and a successful businessman/ entrepreneur/venture capitalist who has actually created thousands of jobs in the real world. Mark Warner represents an important swing state, he is a fresh face on the national scene, his persona would not overshadow Obama, and Warner would be qualified to be president if necessary.

Let’s examine all these reasons why Mark Warner will get the call.

Warner is a moderate

Most folks will agree that the Democratic Party is in desperate need of some moderate leaders, and Warner fills that bill.  Since his 2008 election to the Senate, Warner ranks as the 37th most liberal senator and the 62nd most conservative, according to the National Journal 2009 Senate vote ratings. Which moves one to ask, moderate compared to whom?

Obama, Biden, and Hillary of course! For in 2007 Obama claimed the #1 spot as the most liberal member of the Senate by this same National Journal vote rating, while Biden was ranked #3 and Hillary lagged behind at #17.

So by National Journal standards, Mark Warner at #37 is a Senate moderate.

In 2012, Obama will need to at least pretend to move to the middle in order win re-election, and Mark Warner could help Obama with that perception. He would help dissipate that “Obama is a socialist” battle cry, for it would be a stretch to call Senator Warner, a multi-millionaire former venture capitalist, a socialist.

As governor of Virginia from 2002–2006, Warner was ineligible to run for a second term in 2005. (The Virginia Constitution forbids any governor from serving consecutive terms and that is why there are so many former Virginia governors running around.)

Governor Warner was very popular at the end of his term, having earned a reputation for good fiscal management and bridging partisan differences.

Just how popular was he? Here is my personal testimony:

Living in Alexandria, Virginia, during the 2005 governor’s race when Warner’s lt. governor, Tim Kaine, ran against Republican Attorney General Jerry Kilgore, I distinctly remember our mailbox being filled with large full color flyers featuring Mark Warner’s face more prominently than gubernatorial candidate Tim Kaine. To the average voter it looked as if Governor Mark Warner were running for re-election, which was the intent of course.

Now, after serving four undistinguished years as Virginia governor from 2006 -2009, Tim Kaine is perched atop the Democratic National Committee as chairman. Another reason why Mark Warner will get the VP call: because it helps when the national party chairman owes you a huge favor.

After Warner’s gubernatorial term ended in January of 2006, there was much buzz about him running for president in 2008. Buzz so loud that in October of 2006 Mark Warner made national political news when he announced he was not running for president. Warner instinctively knew he needed some national face time if he was ever going to make a serious run at the White House.

If luck is when preparation meets opportunity, then Mark Warner had all three when in August of 2007 Senator John Warner (no relation) announced his retirement after 30 years in the Senate. This meant an open seat for the 2008 election, which to Mark Warner was the political equivalent of sweet low-hanging fruit.

It was only fitting that Mark Warner run for John Warner’s open Senate seat — for the younger Warner knew it was easier to replace John Warner than run against him, because he had already done that.

Back in 1996, in his first attempt at elective office, then virtually unknown, self-made multi-millionaire businessman Mark Warner challenged popular incumbent Senator John Warner in what became a hotly contested race known as Mark vs. John.

In November 1996, Mark Warner lost respectably to Senator John Warner, 47.4% to 52.5%, but Mark was perceived as a winner for the tough fight he waged against the iconic three-term senator running for his fourth term. All agreed this young Warner had a bright political future.

So now we are back in mid-2008 and Senate candidate Mark Warner is ahead by about 30 points, sailing to an easy victory against former Virginia Governor Jim Gilmore. During this time Warner appears on Obama’s long list for VP running mate, but Warner took himself off that list to pursue his Senate seat, as reported by USA Today in June of 2008.

Then Senate candidate Mark Warner receives a call from Obama asking him to be the 2008 Democratic National Convention keynote speaker.

(Political junkies will remember that back in 2004 it was presidential nominee John Kerry who asked an unknown Illinois Senate candidate named Barack Obama to be the convention keynote speaker. Could this keynote speaker thing be a secret code for Democrats?)

But what was not predicted was how Obama would turn Virginia “blue” for the first time since President Lyndon Johnson won the state in 1964. This phenomenon is a segue to one of the most important reasons why Obama needs Mark Warner on his 2012 ticket.

Virginia as a new swing state

Mark Warner’s popularity and influence in his adopted home state could be a deciding factor in determining which presidential ticket wins Virginia’s 13 electoral votes in 2012.

The shade of “blue” that Obama turned Virginia in November 2008 was a very light baby blue, because exactly a year later Virginia was back in the red state column when Republican Attorney General Bob McDonnell staged a spectacular eighteen-point gubernatorial blow-out victory over state Senator Creigh Deeds.

Then the nation watched as another potential “national star” Virginia governor was born.

The key to Bob McDonnell’s decisive victory was winning back all those independent voters who had put Obama over the top a year earlier.

The president was coaxed to Virginia only once to campaign for Deeds, because Obama’s “hope and change” magic dust that he had sprinkled over Virginia in November of 2008 had long evaporated by November of 2009.

From a historical perspective, Virginia claims eight presidents, but it has not seen one since Woodrow Wilson. With this in mind, do not downplay what I call the “Virginia presidential pride factor,” for Mark Warner could be the state’s best shot for long awaited number nine. He could garner votes from older voters who actually care about this.

Keeping Virginia “Obama blue” will be a major objective for Mark Warner as Obama’s VP running mate, for his boss will really be counting on him to deliver the state in 2012.

Senator Warner could be extremely effective building new bridges to the business community, since the Obama administration has been accused by business leaders of fostering an anti-business climate, which has resulted in a slow recovery with high unemployment.

As Obama’s running mate, Warner, the former venture capitalist, could serve as Obama’s roving ambassador, able to be deployed on dangerous diplomatic missions to hostile territories such as the U.S. Chamber of Commerce.

The trip to the top is faster without baggage

Mark Warner is known as a squeaky clean family man. He is not a rock star in the Hillary/Obama mold, but has a reputation as a brilliant political strategist who actually enjoys getting out and pressing the flesh on the campaign trail.  Since no one outside of the D.C. area has ever heard of Mark Warner, after he is selected as Obama’s running mate, his image could be carefully crafted to play in Peoria.

While in the Senate, Warner has been a quiet freshman and has virtually disappeared from the national scene. But when the VP buzz starts, he will make a strong reentry and be very useful to Obama for fundraising, thanks to his own deep pockets and his many friends with their own deep pockets.

The Obamas already know that Mark Warner and his very low-profile wife, Lisa Collis (note: she does not use the name Warner), would not pull a Sarah Palin and overshadow either Barack or Michelle on the campaign trail. That is likely an important consideration for both the president and first lady in selecting a new VP running mate.

Best of all, there are no obvious skeletons in Mark Warner’s closet. Unless one considers excessive ambition a form of baggage.  For according to Mark Warner’s Wiki profile:

When his parents visited him at college at George Washington University in DC, he obtained two tickets for them to tour the White House. When his father asked him why he didn’t get a ticket for himself, he replied, “I’ll see the White House when I’m president.”

Warner is eminently qualified to step in as president if the unspeakable happens.

More likely, however, Warner would be in a premium position as the 2016 Democratic frontrunner from two perspectives. First, as the sitting vice president running for “Obama’s third term,” and second, if Obama is defeated in 2012 (assuming the press does not hold Warner responsible for Obama’s loss), then Warner would be the natural frontrunner in 2016 to unseat the White House occupants who were victorious over Obama/Warner in 2012.

If 2012 turns into a Hillary vs. Obama rematch, with Hillary launching a successful primary challenge and defeating Obama, my prediction still stands. For I am confident Hillary would also select Mark Warner as her running mate for all the aforementioned reasons.

(History buffs will know that the only incumbent president who has ever been denied the nomination by his own party was President Franklin Pierce in 1856.)

An Obama/Warner ticket would be historic, for it would be the first time two Harvard Law School graduates ran on the same ticket. That alone should keep Glenn Beck hopping with some great new material!

Myra Adams is a media producer, writer, and political observer who served on the McCain Ad Council during the 2008 McCain campaign, and on the 2004 Bush campaign creative team. Her columns have appeared on PJ Media, National Review, The Daily Beast, The Daily Caller, RedState, BizPacReview and Liberty Unyielding. . Myra's web site TheJesusStore.com contributes all profits to Christian charity. Follow Myra on Twitter @MyraKAdams
Read more by Myra Adams
SHOW COMMENTS