Flailing Obama in the Black Community

In aftermath of Hurricane Katrina, Cornel West proclaimed, “[Hurricane Katrina] showed the unbelievable resilience [of blacks] in the face of crushing white supremacist powers.” This statement added to his already bloated legacy of race-baiting diatribes.

When he criticized blacks who achieved financial success based on meritocracy as the black bourgeoisie, he was applauded by blacks amenable to the idea of class warfare. West’s comments that those whom he identified as the “black bourgeoisie” had an obligation to fight for the 33 percent of black children living in poverty were also met with approval. His brick throwing at those he views as “financially privileged” black men made positively no sense whatsoever to those of us with sense, but to those who thrive on race as currency, it was a clarion call from the heavens that represented their mindset.

There was no shortage of applause or echoing of agreement for his despiteous condemnation of Dr. Condoleezza Rice as having sold her soul in order to assume the elevated status and position she held. In his mind, Dr. Rice’s hard work and mastery in her field has nothing to do with her accomplishments.

West claimed that President George W. Bush talked about God but had forgotten what West viewed as the primary tenet of Christianity, i.e., compassion and justice for the less fortunate. That ridiculously fallacious statement brought praise from an equally ignorant, epigonic black pastorate absent of biblical literacy.

His misplaced blame and misrepresentations of rapes (while husbands were forced at gunpoint to watch), murders, and beatings that allegedly took place in the Louisiana Superdome got him invitations to appear on top news programs — from Fox to PBS.  Of course, he neglected to point out that, to the extent his assertions of such violence were true, it was black carnivores cannibalizing the weaker of their animal kingdom housed there in the aftermath of Katrina. His vivid recounting of dozens of people — most of whom were black, of course — he claimed had thrown themselves to their death garnered him praise for being willing to discuss the ugly truth that others avoided.

His view that the September 11 terrorist attacks “gave white Americans a glimpse of what it means to be a black person in the United States — feeling unsafe, unprotected, subject to random violence, and hatred for who they are” was echoed by Louis Farrakhan and Jeremiah Wright.  I would argue that it sounded as though he were speaking of growing up in the Cabrini-Green housing projects or South Central Los Angeles.

He was one of the principle participants in the Million Man March and Russell Simmons’s Hip-Hop Summit. He was involved in black causes with Al Sharpton and Louis Farrakhan.

Tavis Smiley was extolled as being one of the people that President George W. Bush least wanted to be interviewed by because Smiley is widely viewed as being such a formidable interviewer.

Smiley was the toast of PBS and of the black illuminati when he was selected as the moderator of the Democrat Presidential Forum at Howard University in June 2007 — and then again for the Republican All-American Presidential Forum in September 2007.  Smiley made it known in advance that, as moderator, he would focus his questions on race-based domestic issues because, after all, everyone knows that blacks are disenfranchised, disadvantaged, and in need of handouts and special dispensation for their years of suffering in post-slavery America.

He is the epitome of “do the right thing black socialism.” He founded the Tavis Smiley Foundation, which funds programs to develop young leaders in the black community. Black schools named buildings in his honor.

That is, until West and Smiley dared challenge Obama to make good on his campaign promises to the black community. West dared to publicly characterize Obama’s dealings with him as two-faced, rude, and dismissive.  He told how Obama had tried to intimidate and bully him. Smiley has become increasingly more critical of Obama for what has been viewed as his inattentiveness to the black man and, specifically, to black poverty.

The vituperation was swift in coming. They were set upon from every sector of liberal blackdom.  How dare they criticize Obama? They were committing the ultimate sacrilege — they were black liberals of unassailable “blackness” criticizing the prince of “blackness” in public. And if that weren’t bad enough, not only did they combine their efforts on a talk program, they also organized a “Poverty Tour” to bring attention to black poverty, the needy, and the failings of Obama.

The “Poverty Tour” traveled to Indian reservations, soup kitchens, and low-income housing communities. Judging from the attacks, it is reasonable to believe that the White House itself wasn’t about to let West and Smiley practice such disloyalty without punishing them. There was no way Obama could afford to allow these two men, both of whom have unimpeachable records of viewing things through racial prisms, to bastardize him in the very communities he is counting on to help get him reelected.

His minions were swift and vicious. Actor and television personality Steve Harvey blasted them as ignorant buffoons — even going so far as to do a comedy skit of them as Uncle Toms driving a bus. Al Sharpton chimed in on the attack as well. Radio jock Tom Joyner was particularly vicious in his criticism.  There were accusations that Smiley was just bitter because Obama had turned down offers to be on his show. West was lampooned as a sad sack, as having been a failure at Harvard, and as being a bitter black man.

I’ve got prime real estate right in the middle of Lake Michigan to sell anyone who thinks Obama’s fingerprints aren’t all over these attacks. Let me remind you that these are the royalty of Blackdom. This is the Jet magazine and Ebony magazine set hurling these epithets.

It says that contrary to these and other “widely” held beliefs about blacks, success, and groupthink, it is not just those who are targeted as Uncle Toms who are attacked. It is any black that dares to reject the uniform code of black identity groupthink. 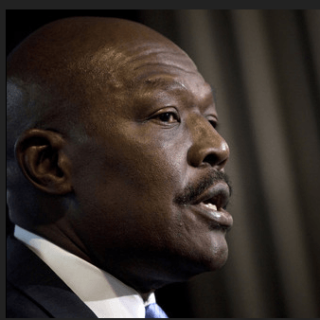