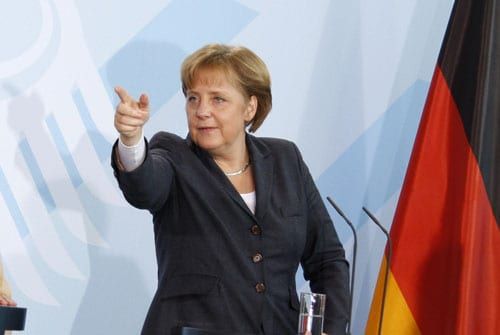 As Europe, and in particular the eurozone currency union, has lurched from crisis to crisis these past few years, Angela Merkel, German chancellor and de facto leader of the continent, has become fond of insisting that the solution to each new problem is “more Europe.” And on Sunday the German people voted decisively for more Merkel, ensuring that “more Europe” will continue to be the order of the day.

Merkel’s center-right (by European standards) Christian Democrat Union (CDU) and its Bavarian sister party won 41.5% of the popular vote, a big increase on the 33.8% they won in 2009. The result was a personal triumph for Merkel, and her reward for guiding Germany through the post-2008 financial crisis relatively unscathed. Despite the scale of her victory, however, things didn’t all go Merkel’s way. The CDU finished just short of an overall majority, and her coalition partners for the past four years, the classical liberal, pro-business Free Democrats (FDP), suffered a devastating defeat, taking just 4.8% of the vote after winning a record 15% in 2009.

Merkel will now enter into coalition negotiations with the left-of-center Social Democrats (SPD), who came second with just over a quarter of the vote. In theory the SPD could join forces with the Left Party and the Greens to form a majority in the German parliament, the Bundestag. However both the SPD and the Greens view the Left Party — which is far enough left to include former members of the East German communist party — as too radical to go into government with. Publicly the SPD is claiming they’ll be no pushovers, but they won’t want to be accused of holding the country to ransom, given the strong showing of Merkel’s CDU and the fragile state of the economy.

The pro-Europe SPD is also well aware that if Merkel is unable to form a government there could be a fresh election. And while there’s no guarantee the SPD would do any better, it could do a lot worse. Despite being officially founded just five months ago, the conservative, anti-eurozone Alternative for Germany party (AfD) picked up 4.7% in Sunday’s vote, just short of the threshold needed to secure representation in parliament. AfD has declared itself the heir to the Free Democrats, and with the FDP having performed so disastrously many of its supporters would likely switch to AfD in a new vote, resulting in a CDU/AfD coalition that would pressure Merkel to pursue a tougher line in dealing with indebted eurozone countries.

So a “grand coalition” of center-right and center-left is the likely outcome. And while at home Merkel will have to throw the SPD a bone or two — perhaps a national minimum wage and tax increases on the rich — there will be no discernible change in policy, either domestically or, more significantly for the rest of Europe, in terms of German policies on the eurozone and wider European Union (EU); Merkel declared that her party’s victory “was a very strong vote for a unified Europe,” and insisted that “on Europe we will not change course.”

From the point of view of the U.S., it’ll be business as usual; while the Obama administration would no doubt have liked to have seen more of a tilt to the left in Germany, America’s prime concern is that nothing threatens Europe’s already painfully slow economic recovery, or the stability of the eurozone and EU; any reversal could tip the U.S. back into recession.

In recent years Merkel has managed to perform a remarkable double balancing act: inflicting punishing austerity on Greece, Spain, and other southern European nations while keeping the eurozone together; and using German taxpayers’ money to keep those countries afloat while increasing her popularity with voters. (The reaction of Greeks to a resounding victory for the “Queen of Austerity” typifies the lack of enthusiasm for Merkel’s re-election in the south.)

A stronger showing from either the right or left would have been bad news for euro-enthusiasts. A more right-wing administration in Berlin would have meant a scaling back in bailouts for southern countries, and made their departure from the eurozone more likely, while a coalition with greater SPD influence would have meant more pressure for a French-style loosening of austerity, with the likely slowdown in growth and rise in unemployment that would have followed; at the moment modest German growth is just about the only thing keeping Europe afloat, and it’s largely due to Merkel’s policies of cutting spending, reforming welfare, and easing regulations on businesses.

So if at home Merkel’s victory was victory for stability and caution, further afield it appears to be a victory for the supporters of the eurozone and the broader goal of an “ever-closer union” of European states, leading ultimately to a federal Europe. “Grand coalitions” of centrists — largely free of ideology except for a belief in bigger government, efficient management of the economy, and the removal of as much decision-making power as possible from ordinary people — are just what the leaders of the European project ordered.

It’s by no means clear, however, that Merkel shares the euro-fanatics’ vision. While she’s almost single-handedly kept the eurozone from breaking apart, she hasn’t shown the enthusiasm that many would like her to for turning it into a transfer union along the lines of the United States, with money from Germany and other wealthy northern countries being redistributed to the south, or for a banking union that Germans suspect would see their sound banks propping up other countries’ weak ones.

In fact it’s not at all clear what Merkel’s vision is, either for Germany or for Europe. Critics say she merely deals with each new crisis as it occurs, doing what’s necessary to keep the euro afloat and German voters happy, with no thought for the longer term. She’s certainly an unusually reticent politician, not given to the grandstanding and emoting of a Barack Obama; she’s technocratic and pragmatic rather than ideological. Some observers say that as an ambitious young woman in communist East Germany she learned to keep her politics to herself.

Many Germans of the generation before Merkel’s — and certainly the political classes — had any nationalist tendencies thoroughly beaten out of them in the postwar years, and the first leaders of the unified Germany signed on to the notion promoted by the pro-Europe elites that were Germans ever to vote for a looser relationship with their neighbors, it would only be a matter of time before they were once again clambering into their panzers and heading for the borders of France and Poland.

That idea has always been nonsense, designed to scare Europeans into voting for more centralization and less democracy. But unlike her predecessors Merkel does seem intent on defending Germany’s national interest, while acknowledging that Europe’s recent past demands a unified continent with Germany at its heart, and appears to see no contradiction between the two imperatives.

But while Merkel has managed to keep the lid on the euro crisis for the last couple of years, it could soon boil over again. Both Greece and Portugal may soon require another bail-out (a third in the case of Greece), and many on the right, including in Merkel’s own party, will resist demands for Germany to pick up the tab. Meanwhile, British Prime Minister David Cameron’s plan to renegotiate the UK’s relationship with Europe, with an in/out referendum to follow, will force Merkel to take sides in the debate on the future of the greater European project. After managing to keep her cards close to her chest for so long, Frau Merkel may finally be forced to show her hand.