In Austria’s recent national elections, voters gave significant support to a party that seeks to bring back Nazi symbols and salutes. The anti-immigrant Freedom Party (FPO), headed by Heinz-Christian Strache, former dental assistant and representative of Europe’s Cities Against Islamisation group, won 18 percent of the vote.

Another anti-immigrant party, the Alliance for Austria’s Future, led by Jörg Haider, a former Freedom Party leader who broke away and formed a new party in 2005, got 11 percent of the vote. Together, these allied parties won almost a third of the vote, giving them huge gains over the traditional leading parties, the center-left Social Democrats and the conservative Austrian People’s Party.

According to AFP, “the exact distribution of the 183 parliamentary seats will only be officially announced on October 6, 2008. But the combined score of the far-right parties would put them in second place ahead of the conservatives.”

In 2000, when anti-immigrant parties also gained significant power, the People’s Party formed a coalition with the Freedom Party. As a result, Israel recalled its ambassador in protest. The United States also recalled its ambassador “for consultations.” European governments began downgrading relations with the Austrian government. Reacting to world opinion, then-president of the FPO Jörg Haider began to downplay his anti-immigrant, pro-Nazi stance. But similar attempts by the FPO to downplay these sentiments now aren’t having much of an effect.

“Strache wants the banning of the use of Nazis’ symbols and Nazis’ ideas to be lifted. Such attitude speaks for itself,” he said.

He added: “Not all people who vote for him are neo-Nazis, but the hard core of his party has extreme right-wing backgrounds. He gives people having a neo-Nazi past high positions within the party.”

“We are very concerned over the rise to power of people who promote hatred of foreigners and Holocaust denial, and befriend neo-Nazis. We see it as a disturbing development and are following the matter very closely.” …

However, he also stressed that “it is still early to attempt any alteration in the diplomatic relations between the two countries. We are merely following developments with concern.”

Strache is a member of Cities Against Islamisation and his Freedom Party is assumed by many to be anti-Islam. So, why aren’t we also hearing immediate cries of alarm from Muslim media outlets like Iran’s Tehran Times?

We’re not hearing cries of alarm because the FPO is aligned with the Iranian regime. According to the Jerusalem Post, Strache “vehemently opposes sanctions designed to force a suspension of the Islamic Republic’s nuclear program.”

Other observers see Strache’s gains as a sign of anger about the economy and the Austrian government. According to Wolfgang Bachmayer, manager of a political consulting group, “this election campaign was not about immigration” — it was “more about social themes and an anti-European Union attitude,” Bachmayer said. “The Freedom Party in this campaign made far fewer attacks on foreigners than in the past.”

That opinion wasn’t shared by a Viennese Muslim cab driver I spoke to in August. After describing his family’s suffering during the wars in the former Yugoslavia, the Serbian attacks, and the relatives who died as a result of those attacks, he pointed to one of Strache’s election posters. The former dental assistant was all sparkling blue eyes and shiny white teeth, giving a thumbs-up to the Freedom Party slogan, “Now it is about us Austrians.” 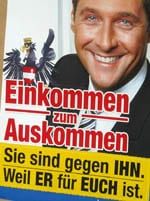 “That man is a fascist,” the taxi driver said.

Since Strache has been photographed — in his youth — wearing a military uniform at an alleged far-right gathering, raising his hand and stretching three fingers in Nazi salute, the taxi driver had a point.

According to Strache, the photograph wasn’t a shot of a Nazi salute. He was simply caught trying to order three beers while dressed in appropriate uniform. Some may choose to believe that. Some may choose to believe that this election was about fears of inflation and general anger about government mismanagement. But a recent poll by the GfK market research group showed that after Britain, Austrians were the most concerned about immigration and integration in Europe, with one in five rating it as a top worry. When we’re talking about a country that only recently acknowledged that it was a willing part of Hitler’s Third Reich, denial can be an issue.

During my visit to Austria, I saw two arguments between young, somewhat drunken youths and working immigrants. Both were provoked by the youths and neither came to blows, probably because the working men demonstrated that they were willing to fight back.

Before this election, in the streets of Vienna and on country lanes in Tirol, FPO posters dominated the political landscape. Some were defaced with Hitler mustaches and red clown noses, but Strache’s gleaming blue eyes and slogans shone through. I wondered if his supporters were, like Ron Paul’s supporters in the U.S., compulsive about plastering slogans all over the place — or if Strache and his party’s ideals really did have popular support. Recent election results answered that question.

Mary Madigan is the publisher of the Exit Zero blog. She also guest blogs on Solomonia.
Read more by Mary Madigan
SHOW COMMENTS