…General Law chapter 54, section 65 prohibits within 150 feet of a polling location, among other things, the posting, exhibition, circulation, or distribution of material — including pasters, stickers, posters, cards, handbills, placards, pictures or circulars — intended to influence the action of the voter. G. L. 54, 65 (2002 ed.). Consistent with the activities restricted by statute, the implementing regulations prohibit the solicitation of votes for or against, or any other form of promotion or opposition of, any person or political party or position on a ballot question, to be voted on at the current election. 950 C.M.R. 54.04(22)(d). Accordingly, a person standing within 150 feet of a polling location, including observers in the polling location, may not: hold any campaign sign; hand any person literature intended to influence the voter’s action at the polls; wear any campaign buttons or identifying signage; solicit a person’s vote for or against a candidate or question on the ballot; or, distribute stickers ….

The ballot box is one of American democracy’s secular sacred spaces, where the fact that you voted may be public, but whom you voted for is your own private business.

Unless, that is, you happen to be in one of the low-income communities targeted for “help” from the community organizers of Neighbor to Neighbor Massachusetts, where individuals may just need a little extra guidance to ensure they vote the correct way.

While conservatives in most of the rest of the country woke up to a celebration last Wednesday, those of us marooned in Massachusetts found ourselves left high and dry by a red wave that didn’t have quite enough oomph to overcome the leftist machine our home state is so infamous for. In spite of a number of good candidates and a palpable level of Republican voter enthusiasm, most of the races weren’t even close. Many pundits have ascribed this surprising finish in large part to the effectiveness of the organized get out the vote effort that the Democrat establishment, along with their community organizer and union allies, were able to bring to bear. Even the best and most well-funded candidates versus the most scandal-ridden incumbents are hard-pressed to overcome the extra percentage points this structure is able to set into gear on election day.

In general, this problem is a political one. As long as the requisite laws are obeyed, fair enough. We can debate the matter, try to bring a level of fairness to the system, and make an effort to expose the excesses while our side tries to do better next time.

But what if existing laws and mores were, in fact, violated? That’s where what went on at the polls on Tuesday comes in. I have heard from multiple poll watchers who noted apparent or possible irregularities at the voting places they were stationed, and Neighbor to Neighbor Massachusetts takes center stage. 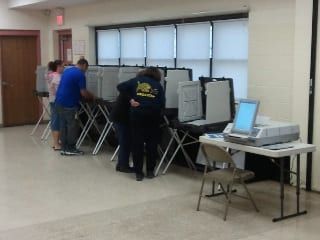 A Neighbor to Neighbor interpreter “assists” a voter with a bilingual ballot.

Neighbor to Neighbor describes itself thusly:

Neighbor to Neighbor Massachusetts is a progressive organization of working class, multi-racial, and multi-ethnic people working together to build political and economic power to improve the quality of lives in our communities. As members, we lead the change ourselves through education & training, issue & electoral organizing, policy advocacy, alliance building, community-controlled economic development, and holding decision-makers accountable.

We seek to create a powerful movement for economic and social justice that builds a participatory and responsive democracy to transform people’s lives and the political and economic structures that impact them.

You get the drill. Needless to say, N2N declared VICTORY! following the election day’s results. What went into it? Let’s hear from some witnesses:

Attached is a photo I took when a Neighbor to Neighbor organizer escorted a voter into the booth as an “interpreter” [See above]. Funny; the ballots were bi-lingual so I didn’t see the need for an interpreter. She was coaching voters to vote all “D’s” and on a few occasions she actually had the pen in her hand.

I was almost kicked out by the police officer who was sitting in the room when I took this photo but I told him I’d be more cooperative and sat back down. Soon after this photo the Baker legal team [Charles Baker, Republican candidate for governor] was able to convince the warden and the officer that this woman was not allowed to escort any more voters to the booths. She quickly changed tactics and started sending people in with a sample ballot filled out so the voter would just copy it. Incredible!

If you look closely at the photo, the Neighbor to Neighbor logo is a big fish eating a little fish. The big fish is a collection of dozens of little fish. I asked one of the organizers who was poll watching as well (that’s another story), what the logo meant and she said it represented the “people” eating people like you. I responded that the logo to me more aptly represented all of us together as Americans eating the government. She did not respond; go figure.

This Neighbor to Neighbor team was a combination of a local leader who knew everybody and some out of state help to bang on doors and coordinate driving people to the polls. They are very good at what they do.

These “interpreters” were certainly the call of the day. At the location I was working, the “interpreter” was a priest — or some cat with a priest collar on from a church that sounded anything but sacred. I reported him numerous times to the two wardens who did talk to him, but argued with me about him being an interpreter. I informed them that typically interpreters don’t talk with their hands unless they’re in the deaf community. And they usually don’t need polling pens, to interpret, either. I also mentioned that the ballots were bilingual except for the names that were all over the TV, radio, lawn signs, etc. for the past year. None of this seemed to impart any wisdom on the wardens.

A particularly exasperated volunteer vented shortly after the election:

This voter fraud clearly was the same scene all over Worcester. We shut them down at my polling place halfway through the day. ACORN, Neighbor to Neighbor, what have you, it should just be stopped. We do not have elections in Massachusetts, we have a game where the rules only apply to the honest and the Dems look the other way or maybe they even support it. … It says right on [N2N’s] website “they” register people to vote and “they” have them sign a pledge contract to vote. I sat next to a Lawyer for the Democrat party all day — he did nothing but justify why all the fraud [I witnessed was] actually legally OK. I think he was there to ensure crimes were committed but would go unpunished! He referred to it as ensuring all deserving of a vote got one.

The machine for the visually impaired speaks Spanish, no help needed. … I saw food exchange hands in return for the vote. Collecting people at the food pantry, posting ballots on car windshields. … Ballots prefilled out brought in as guides to voting, helpers actually voting for the person. One person — I am sure a “helper” — voted at least 20 times!

Apparently, mental incompetency is no hurdle to voting in Massachusetts. Another outraged observer writes:

The name “Neighbor to Neighbor” was frequently mentioned by those coming in, especially while irregularities and outright fraud were occurring.

When I objected to a woman voting for her “son” (he appeared to be mentally handicapped) and her “daughter” who I was told was deaf, the “inspector” who I sat near said I was discriminating when I explained there is a reason 10-year-olds don’t vote! [I saw] the woman filling in the ballot and then telling the “son” to pick up the ballot and follow her — he needed help to feed it into the box as well. The young man stood helpless while she showed the “daughter” how to vote. He stood within two feet of me and was clearly unable to communicate when the somewhat deaf poll worker asked him his name as they came in as a family, and there was much confusion at the time as a large group came in at once.

Numerous times I saw the warden “point to” (clearly indicating by touching) the ballot, [showing people] how to vote — she would use the excuse they needed an interpreter though the ballot had a Spanish translation.

Several men who were checked off by the union list keeper (Originally I thought this was a Democratic poll watcher but the afternoon list keeper explained to me his list was for something else and it was clearly different … the carpenter’s union fellow — union jacket, shaved head with triangle hair design and earring — came in several times to check this list and take it or review it with someone outside. He took it with him in late afternoon) asked for specific direction over and over again from the warden, who took them to another booth away from me to better instruct them.

I watched one woman look to her neighbor for advice clearly asking how she should vote. There was a generally loud atmosphere in the room (the warden was playing music videos on her computer). The concept of a secret ballot or competency seemed to exist only in my head.

At least 30 people voted on old addresses, several brought in IDs that the poll taker kept completely hidden and handed back without their voicing their name or address.

One fellow kept checking in with the warden on his progress. “I got all the calls made, now I am going door to door and everywhere I can to get them in here.” Shortly after this I saw older people coming in with hot food trays (foil wrapped in plastic bags) … .

The ACORN scandal has brought the shenanigans perpetrated by professional community organizing groups to the forefront of public consciousness. From what I have been able to determine so far, Neighbor to Neighbor Massachusetts, at least, does not receive public funding — something that, as with ACORN, would add another layer of outrage to this already outrageous story. The matter nevertheless calls for further investigation, both to make sure this group is not receiving such funding, and to see just which foundations and unions — from which the group receives the bulk of its money — are supporting it, though the story we know is disturbing enough.

A secret ballot, free from manipulation, coercion, and abuse is a sine qua non of American participatory democracy. You and I should not have our votes nullified because there is a group out there bending and breaking the rules in their zeal to hammer their own agenda through at the polls. Is 150 feet of honor and respect for the franchise really so much to ask?

Martin Solomon writes on a variety of topics at his blog Solomonia. He is a member of the advisory boards of Christians and Jews United for Israel and Americans for Peace and Tolerance.
Read more by Martin Solomon