Der Rechtsstaat. The term is a favorite of German politicians and editorialists — especially when it comes to bashing the USA and measures taken by the USA in its war with Islamic terror organizations. Literally, it means the “state of law” or “legal state.” But the closest common English expression would be rather the “rule of law.” According to the virtually unanimous opinion of the German political and chattering classes, the United States is supposed to have betrayed the Rechtsstaat and its principles by, for example, establishing the Guantánamo Bay prison camp and refusing to offer foreign terror suspects access to civilian courts and their due process protections. Never mind that war is by definition the absence of law in the ordinary sense of the term and hence necessarily involves extra-legal measures. It is indeed precisely for this reason that there are a special set of so-called “laws and customs of war” to regulate its conduct among civilized nations. Never mind that America’s enemies in its current war make no pretense to respecting even the latter.

But now we know — in case there was ever any doubt — that the whole German hue and cry about the Rechtsstaat was never serious anyway. Thus, last week, the German government announced that, in the name of combating tax evasion, it was going to purchase personal account data stolen from Swiss banks. German authorities will reportedly pay the data thief some €2.5 million. The purchase will be made by the state government of North Rhine-Westphalia, with the federal government’s blessing. With the help of the stolen data, authorities hope to be able to recover up to €400 million in lost tax revenues according to the latest estimates. (The latter have been notably inflated by a factor of four as compared to the initial reports.)

Germany is thereby not only fomenting crime abroad. As it so happens, paragraph 259 of Germany’s own criminal code prohibits the purchase of stolen goods. It is specified that in order for it to count as criminal, the purpose of the purchase must be the “enrichment” of the purchaser or a third party. But arguably this condition is in fact fulfilled in the present case, as the widely cited monetary cost-benefit analysis of the purchase makes clear.

According to a February 3 report in the daily the Süddeutsche Zeitung, Chancellor Angela Merkel overcame her initial hesitations and opted to support the purchase of the stolen data after concluding that “the strict defense of the law” was politically unfeasible. Citing government sources, the report continues:

In the current political constellation…the chancellor and her closest advisors saw no chance of insisting on the letter of the law — and thus possibly protecting tax cheats. 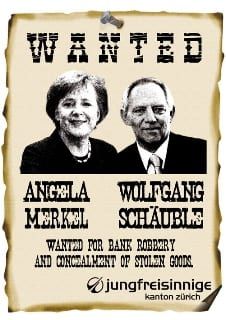 During a roundtable discussion on Switzerland’s SF1 public television on Friday, Roger Köppel, the editor-in-chief of the Swiss weekly Die Weltwoche, faced off against Hans Eichel, a former German minister of finance and adamant defender of the purchase of the stolen data. Addressing Eichel directly, Köppel did not shy away from a subtle allusion to Nazi Germany: the Unrechtsstaat — or “criminal state” — par excellence, in which the application of the law was famously subordinated to the so-called “popular mood” or Volksgeist. “If the political leadership of [the] state decides how the rule of law is to be applied on the basis of the current political constellation,” Köppel told Eichel, “then I have to say that as a German shivers would run down my spine.”

This is not the first time that German authorities have purchased stolen bank data in the name of combating tax evasion. In early 2008, it was revealed that Germany’s foreign intelligence agency, the BND, had purchased data stolen from the Liechtenstein-based LGT Bank to the same end. Not only did the BND pay over €4 million for the stolen data. It is also reported to have provided the presumed thief, Heinrich Kieber, with a new identity to boot!

It is worth recalling that at the time of the “Liechtenstein Affair,” Germany’s Finance Ministry was headed by the Social Democrat Peer Steinbrück as part of a “grand coalition” government headed by Chancellor Merkel. Now, however, the Finance Ministry is headed by Chancellor Merkel’s Christian Democratic party colleague, Wolfgang Schäuble. Attempting to justify his decision in an interview with Swiss public television, Schäuble explained that, after a “thorough examination” of the question, “for me it was decisive that we made a similar decision two years ago.”