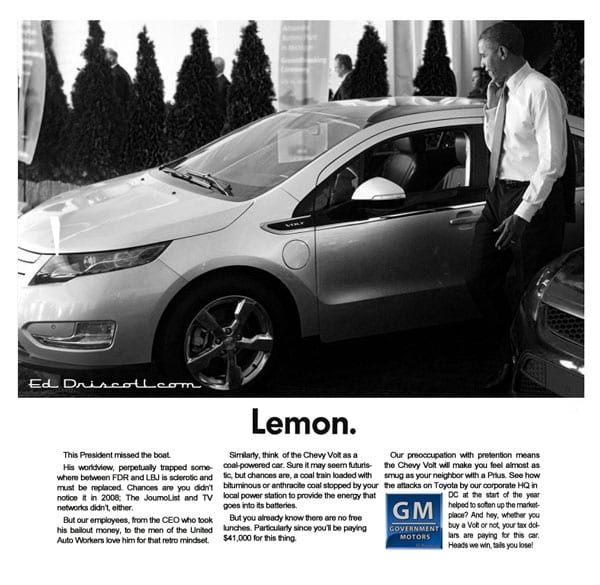 Yet another example of crony capitalism rolls off the assembly line soon, in the form of the GM Volt — an electric hybrid that’s absurdly overpriced and woefully underperforms.

It’s set to sell for $41,000, and travels an underwhelming 40 miles before needing a charge (340 miles when the gas engine is invoked, defeating the basic purpose). It seats four, uncomfortably (thanks to the battery pack down the middle).

But there’s more to the story than just a poorly designed, expensive car subsidized with taxpayer money.

Not satisfied with violating bondholders’ rights during bankruptcy proceedings, Obama twisted GM’s arm into producing the car, despite a lack of projected demand to justify the investment economically. As is usual in such arrangements, Obama added some large carrots to the stick. According to the New York Times:

Quantifying just how much taxpayer money will have been wasted on the hastily developed Volt is no easy feat. Start with the $50 billion bailout (without which none of this would have been necessary), add $240 million in Energy Department grants doled out to GM last summer, $150 million in federal money to the Volt’s Korean battery supplier, up to $1.5 billion in tax breaks for purchasers and other consumer incentives, and some significant portion of the $14 billion loan GM got in 2008 for “retooling” its plants, and you’ve got some idea of how much taxpayer cash is built into every Volt.

Whether the American taxpayers get their money’s worth out of the investment, which they won’t, is beside the point. The precedent has been set for a massive public-private partnership in the auto industry, which can easily spread to other industries (and already has). Granted, Chrysler gets partial credit for that precedent, owing to its $1.5 billion loan in 1980. Giving credit where it’s due, Chrysler’s loan did get paid back. But several things are different now that raise the Volt fiasco to a new level.

First, there’s no Lee Iaccoca in charge at GM. Second, that loan wasn’t made contingent on satisfying a quixotic “green” dream. To the contrary, Chrysler was forced to abandon continued development of a turbine engine as a precondition for obtaining the loan. Third, Congress’ 1979 bill required that Chrysler raise the money privately (though the Feds co-signed the note). Fourth, the amount was “only” $1.5 billion, a large sum even then, but not onerous to the public Treasury. (More importantly, the common view that in the end all worked out hunky dory back then is simply a myth.)

The most important difference, however, is this: in 1980, the government did not become a major stakeholder in the company. There was oversight, and arm-twisting, to be sure. But the Feds did not then take a 61% ownership stake in the company, despite influential economist John Kenneth Galbraith encouraging it. (After an upcoming stock sale, the govenment’s stake in GM is expected to be reduced to below a controlling share.)

Soft fascism, but the squishy kind inevitably leads to the more robust variety. Even the former is ruinous for prosperity and freedom.

One of the chief characteristics of fascism is this sort of public-private “partnership.” A business is still nominally private, but its fortunes are controlled lock, stock, and executive compensation barrel by the government. In essence, under that arrangement, there’s no important difference between public and private; executives become civil servants in disguise. And that’s a fundamental shift — just the sort Obama had in mind during the campaign — from the normal way of doing business even in mixed-economy America.

Onerous regulations that distort market signals are impractical. Putting a heavy thumb on the scale in favor of unions is wrong. Both lead to bad business outcomes and large-scale injustices; both violate the right of voluntary trade and hobble efficiency. But unfair and costly as those are, they don’t amount to a wholesale blending of government and private enterprise. That is what the semi-nationalization of the auto industry has done, and the Volt is how badly that scheme always turns out.

The fact that it will lose money is far from the worst effect. To envision the endpoint of this philosophy, one need only look to Italy during the ’20s and ’30s, when dissent was outlawed and opposition newspapers shuttered. Even in the milder version in America during the Wilson administration, dissidents were jailed, books burned, forms of free speech banned, and conscription instituted. In short, freedom shrank.

Sure, it’s just a car, and GM’s management invited the Feds into the boardroom. But history shows it’s not a long trip from the senior “partner” dictating compensation policy to Yellow Shirts bashing heads in the streets. Anyone who believes that liberal fascists will stop at throttling “the rich” (as if that were OK) can find a roadmap there.

When government gets in bed with business, citizens lose a lot more than money.

Jeff Perren is a freelance writer. Educated in philosophy and physics, the lure of writing soon outweighed science. He lives in the Pacific Northwest and blogs at Shaving Leviathan.
Read more by Jeff Perren