LAPD Urges Officers to Be Community Guardians, Not Warriors on Crime 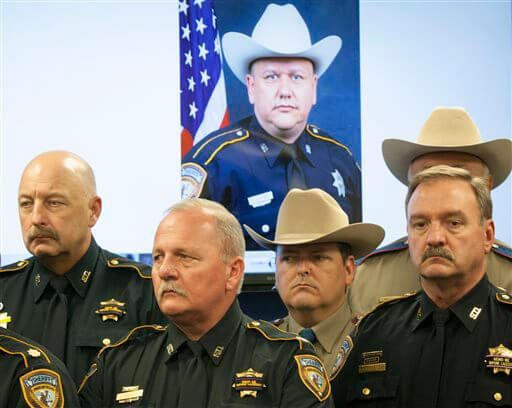 No police officer can do his job if he believes everyone he meets will try to kill him.  Nor can he do his job if he forgets that some of them will.  So every day, every police officer out on the streets of America walks the balance between keeping things friendly with the public and keeping himself from harm.  On every radio call, on every traffic stop, in every last interaction for the eight, ten, or twelve hours in his work shift, he scrutinizes the people he meets and asks himself a simple question: “Does this person want to hurt me?”  Of course the answer is most often “no,” a conclusion the officer usually reaches without conveying that the question had even been asked.

But despite this heightened awareness, most police officers assume they can stand in a very public place and put gas in their cars without fear of being ambushed and killed.  Or at least they did until Friday.  It was Friday evening that Deputy Darren Goforth, of Texas’ Harris County Sheriff’s Department, was gassing up his patrol car when a man walked up behind him and shot him.  Then, after Deputy Goforth had fallen to the ground, the man stood over him and continued firing, killing him on the spot.  Deputy Goforth was 47.  He leaves a wife and two children, a 12-year-old daughter and 5-year-old son.

Shannon Miles, 31, has been arrested and charged with capital murder, and if there is any comfort to be found in this sickening crime, it is in the fact that it occurred in Texas, where Miles, if proven guilty, can expect the punishment such a deed deserves.  We are reminded of course that at that this time Miles has merely been accused and is entitled to a presumption of innocence in the eyes of the law.  Fine, and we shouldn’t wish to have it any other way.  But that presumption does not extend beyond the courtroom, and you and I are free to draw our own conclusions.  As for me, I am satisfied with Sheriff Ron Hickman’s assertion that there is a “mountain of evidence” tying Miles to Deputy Goforth’s murder.

So now the question: Why did Miles do it?  As of this writing, his motive hasn’t been disclosed.  Even so, it is hardly unfair to speculate that with no known connection between Miles and Deputy Goforth and no apparent provocation, Miles may have been impelled to kill by a hatred for police officers, which in some circles is currently much in fashion.  So much so, in fact, that according to Breitbart Texas, some black activists are calling for “lynching and hanging of white people and cops.”  The linked story contains an audio clip from an Internet radio show hosted in Texas by a woman known as “Sunshine.”  In the clip, she discusses with callers the desirability of seeing white people and police officers attacked and killed.  “But who would say such things?” you ask.  Click on over and hear it for yourself.  But be warned: there is abundant coarse language accompanied by images of people treating the American flag in a crude and disrespectful manner. 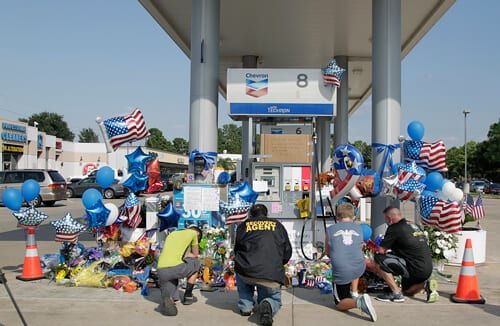 Mourners gather at a gas station in Houston on Saturday, Aug. 29, 2015 to pay their respects at a makeshift memorial for Harris County Sheriff’s Deputy Darren Goforth who was shot and killed while filling his patrol car. On Saturday, prosecutors charged Shannon J. Miles with capital murder in the Friday shooting. (James Nielsen/Houston Chronicle via AP)

Speculation on Miles’s motive has touched off a war of words between elected officials in Texas.  “At any point when the rhetoric ramps up to the point where calculated, coldblooded assassinations of police officers happen, this rhetoric has gotten out of control,” Sheriff Hickman said. “We’ve heard ‘black lives matter.’ All lives matter. Well, cops’ lives matter, too. So why don’t we just drop the qualifier and just say ‘lives matter,’ and take that to the bank.”

This did not sit well with state Representative Garnet Coleman, a Houston Democrat.  “It strikes me as politicizing a death that, I don’t know that anyone knows what was in the mind of the shooter,” he said.   “I think black lives matter.  I think deputy sheriffs’ lives matter.  But I think the statement shows a lack of understanding of what is occurring in this country when it comes to the singling out of African-Americans.”

No, Mr. Coleman, the statement shows a reasonable but as yet unfounded belief that Miles was influenced by anti-police rhetoric such as that voiced on the radio program linked above.  And let us remember: in this instance it was Deputy Goforth who was “singled out” and marked for death.

Also weighing in was professional activist and itinerant darling of CNN DeRay McKesson, who Tweeted that it was “sad that some have chosen to politicize this tragedy by falsely attributing the officer’s death to a movement seeking to end violence.”

But is it an end to all violence McKesson would seek, or just that for which the police can be blamed?  Beginning with the death of Trayvon Martin, and escalating with the death of Michael Brown, we have been inundated with the poisonous lie that the greatest danger faced by blacks in America is that of being gunned down by some racist white person, most probably a police officer.  But how many people who invoke the name of Michael Brown in their lamentations can identify Jamyla Bolden?  She was the 9-year-old black girl shot and killed in her Ferguson, Mo., home on Aug. 18.  D’Eris Brown, 21, has been arrested and charged with the murder.  Jamyla died just a block away from where Michael Brown was shot and killed, yet her death has failed to arouse even a fraction of the outrage that was manufactured after his.

Freddie Gray, too, is a household name, as we are instructed that his death at the hands of the Baltimore Police Department is somehow emblematic of a far larger problem.  But who is Kester Browne?  He is the 7-year-old boy who — along with his mother — was shot and killed in Baltimore a month after Gray died.  And as the murder count grows higher in Baltimore, St. Louis, Washington, D.C., Chicago, and elsewhere, we are still asked to embrace the fantasy that the police are the problem.

Sadly, this fantasy is entertained even within some police departments.  In July, I took to this space to discuss some training being given to police officers in Seattle, the gist of which was that cops are too quick to resort to force and that they should be able to talk anyone into handcuffs and off to jail.  This is a concept most often preached among people who spend their careers behind desks.  As for those who spend their time behind the wheel of a patrol car, theirs is a harsher reality.  And it is this reality that officers in Los Angeles will be asked to wish away as they undergo 10-hour sessions of “de-escalation” training.  The man in charge of LAPD training, Deputy Chief Bill Murphy, recently described this training to the Los Angeles Times.  The scenarios will be based on real-life encounters with the public, he said.  “If [the officers] do everything right, there should be no force.  If they don’t do everything right, then there will be some serious debriefing.”

That quote has cops all over the LAPD rolling their eyes in disgust.  It is worth noting that Murphy spent a mere five years as a street cop before embarking on his climb up the promotional ladder, and that his biography posted on the LAPD website proudly lists all of his bureaucratic posts in which he was exposed to none of the risks faced by cops in more rough-and-tumble assignments.  And with his attitude regnant among his peers in the upper ranks of the department, it should come as no surprise that in Los Angeles, violent crime is up by nearly 20 percent over last year while arrests are down by 9 percent.

Some cops are great talkers and have exemplary records of coaxing people to jail without force, and the techniques they employ should be taught to others.  But even the best talkers occasionally come up against someone who, when given the command to turn around and put his hands behind his back, replies by saying, “Your mama.”  It is in those moments that a cop finds out what he’s made of.

We can be grateful that assassinations of police officers are rare events.  So are shark attacks, but it doesn’t take many before people think twice about swimming in the ocean.  After years of decline, crime is on the rise again in cities all over the country.  Only good police work will bring it down again.  Will good cops be there to do it?

Disturbing Graffiti of Police Officer at Gunpoint Appears Around Houston