The L.A. Times’ Ted Rall Versus the LAPD: He Made It Up. And He Got Caught. 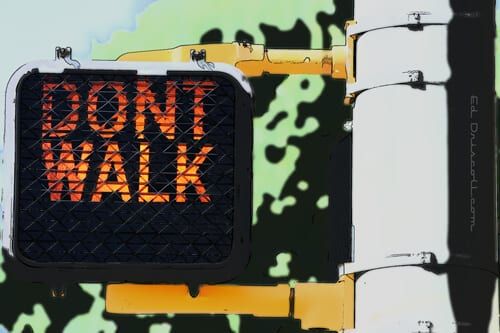 Try to imagine the shock of it: You’re walking along without a care in the world when suddenly, for no reason at all, a motorcycle cop roars up, hops off his bike, grabs you and slaps you in handcuffs, shoves you against a wall, and then writes you a ticket for something you didn’t do.  And in a final gesture of contemptuous insult, he tosses your driver’s license in the gutter before making you sign the ticket.  It must have been a harrowing experience.

Or it would have been, if it had actually happened.

Ted Rall is a writer and cartoonist whose work, until recently, regularly appeared in the Los Angeles Times.  He would not argue with my characterization of him as a leftist, though he would likely dispute my description of his artistic style as that of an animator from The Simpsons who has just polished off a fifth of bad gin.  (Examples can be found at his website.)  On May 11, Rall wrote an opinion piece for the Times in which he criticized a recent campaign by the Los Angeles Police Department to crack down on pedestrian traffic violations such as jaywalking.  In so doing, he recounted his own unpleasant experience at the hands of an LAPD motorcycle officer in 2001.  “This one is personal,” he begins, and then goes on to describe his mistreatment:

Just over 10 years ago, I was ticketed — and handcuffed — for an alleged pedestrian violation while crossing Melrose Avenue.  Ironically, this was one of the rare times that I was innocent of even jaywalking, something I do every day.

Anyway, I had done everything right. I waited for the green “walking man” signal before stepping off the curb.  I walked between the crosswalk lines.  I got across the street just as the flashing red signal began.

All of a sudden, a motorcycle officer zoomed over, threw me up against the wall, slapped on the cuffs, roughed me up and wrote me a ticket.  It was an ugly scene, and in broad daylight it must have looked like one, because within minutes there were a couple of dozen passersby shouting at the cop.

Another motorcycle officer appeared, asked the colleague what the heck he was thinking and ordered him to let me go, which he did.  But not before he threw my driver’s license into the sewer.

This tale of oppression prompted someone in the LAPD to look into the matter and determine if a complaint had been filed.  And yes, it was discovered that Rall had indeed written a letter to protest his abuse, which was assigned to a sergeant for investigation.  The results of that investigation have come back to haunt Rall, prompting the editors at the Times to drop him from the paper.

It seems that Rall took some liberties in his retelling of his encounter with the motorcycle cop, an encounter which, inconveniently for Rall, the cop recorded on audiotape.  The LAPD provided the Times with a copy of the tape, which, strangely, Rall presents in his defense in a post at aNewDomain.net.  The tape begins with the investigating sergeant describing what is recorded, which is three separate stops the officer made, of which Rall’s was the second.  (The relevant portion begins at 6:38.)  You can hear the officer say, “Ped [for pedestrian] stop, Gardner and Melrose.”  The officer asks Rall for his identification and explains to him why he is being stopped.  “You got a red light,” the officer says, “and you just walked across just as free as you wanted to.”  What follows for the next five or so minutes is the sound of passing traffic as the officer writes out the citation.  The officer can be heard whistling and humming a bit, and a man and woman can be heard talking, but what they are saying and to whom isn’t clear.  After writing the citation, the officer asks Rall to sign it and tells him to read the information on the back of it.  Though Rall’s next words are unclear, he apparently asks the officer for a recommendation on a place to eat.  The officer explains that he is newly assigned to the area and doesn’t know “any of the local eateries.”  The encounter concludes with the officer telling Rall to “have a good day.”

There is nothing on the tape that in any way even hints that the encounter was anything other than a routine stop for a minor violation.  There is nothing to indicate that Rall was handcuffed, roughed up, thrown against a wall, or in any way mistreated by the officer, nor is there any indication of the “couple of dozen passersby shouting at the cop” that Rall claimed.

He made it up.  And he got caught.

But that hasn’t prevented him from trying to dispute the accuracy and even the authenticity of the officer’s audiotape.  A follow-up post at aNewDomain.net appears under the sensational headline, “Ted Rall-LAPD-LATimes Battle: New Tape Proves Cops Lied.”

It doesn’t prove any such thing, actually, but the story makes for interesting reading for the way it reveals Rall’s desperation at having been revealed as a fabulist, at least as it concerns his 2001 encounter with the police officer.  He imagines some sinister plot within the LAPD to exact revenge on him for his years of criticism of the department, a plot involving whistling cops and doctored tapes and all manner of subterfuge aimed at removing this burr under the LAPD’s saddle.  And the editors at the L.A. Times, Rall seems to believe, were so gullible as to fall for it.

No, it’s much simpler than that: He made it up.  And he got caught.

And in the newspaper business, unlike, say, politics, it only takes one lie for people to call you a liar.