Cop Reprimanded for Repeating N-Word Shouted at Him 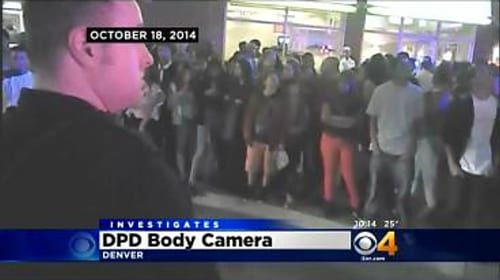 Gentle reader, I hope you’re sitting down.  In fact, I hope you’re near some piece of furniture that will accommodate your lying down, for you may soon feel the need.  As befits the fashion in academia these days, I present you with a trigger warning.  Presented below is a discussion of what we are told is the most vile, the most offensive, the most unspeakable word in the English language.

I refer of course to the N-word.  And for those of you who have not heeded the trigger warning, for those of you so stout-hearted as to venture on with me into the second paragraph, a further warning: Not only will we be discussing the word, if you dare to watch the accompanying video, you will actually hear the word spoken and see it fully spelled out.  Read on at your peril.

Last October 18, Denver police officer Adam Paulsen was among a number of officers monitoring activities at the city’s “Zombie Crawl,” an event that, for reasons beyond my understanding, many find diverting.  As often happens when crowds gather — this is no reflection on the Zombie subculture — a fight broke out, leading Officer Paulsen and his colleagues to take action and restore the peace.  Pepper spray was used, with some of the substance affecting not only the targeted brawlers but also some zombie bystanders.  There was a brief period of tumult, during which the officers found it necessary to block off a portion of the street and prevent people — both living and dead — from passing.  All well and good so far, the type of situation that can arise at any large gathering regardless of the participants’ stage of animation.

Officer Paulsen was wearing a body camera that captured events as they occurred, and the footage released by the Denver Police Department shows that he conducted himself professionally, if occasionally sternly, in dealing with what must surely have been a chaotic and stressful situation.

And then along came one man — cops know there is always at least one — who saw that the shortest distance from where he was to where he wanted to be was a straight line directly through that section of the street Officer Paulsen and his colleagues had sealed off, and who felt he was under no obligation to deviate from that path just because some cop was telling him he should.  We pause here to establish the racial calculus so as to better understand what followed: Officer Paulsen is white, the man he confronted is black (as the more astute among you may already have guessed).

In the video shown by KCNC, Denver’s CBS affiliate, the man can be seen walking directly up to Officer Paulsen, all but inviting a confrontation.  Officer Paulsen places a gloved hand on the man’s chest, a signal to the citizen of even modest prudence that further forward progress will be opposed.  The man tells Officer Paulsen he wants to walk through the area to meet his family, and Paulsen replies that the man will have to walk around.  “[N-word],” the man shouts, “I’m trying to get through!”

“I’m not a [N-word],” Officer Paulsen replies.  “Walk around to your family.”

“I’m trying to get through, homie!” the man shouts.

“I’m not your homie, either,” says Officer Paulsen.  “Just walk around.”

No further footage of the incident was shown in the news report, but we are told the man did not file a complaint against Officer Paulsen.  We may presume he heeded the officer’s instruction and walked around the closed area.  Which, as far as Officer Paulsen is concerned, should have ended the story, right?

It seems to me that Officer Paulsen was no more or less courteous to the man than he deserved, but the headquarters types at the Denver Police Department saw things differently.  They were reviewing body camera footage shot during the Zombie Walk when they came upon Officer Paulsen’s interaction with a man so eager to reunite with his family.  “Uh oh,” these headquarters types must have said, “we can’t have this.”  And then, what we in the trade call an internally generated complaint was written up, investigated, and sustained against Officer Paulsen.

Which points to the mixed feelings many officers have about the use of body cameras.  Yes, body cameras can protect officers from false allegations of misconduct, but if their every action and utterance is to be judged by people for whom real police work is but a dim memory, the cameras will serve to deter effective police work.  “Why should we stick our necks out,” officers will ask, “if some chair-sitting pogue is going to second guess everything that shows up in our videos?”

Why indeed?  Any street cop of any complexion who viewed the video of Officer Paulsen’s confrontation would have shrugged and said, “What’s the problem?”  And this was in fact the reaction of Detective Victoria Oliver, a black female Denver cop who was interviewed for the KCNC story.  “This is political correctness gone awry,” she said, understating the matter considerably.

But once the footage made it before the eyes of people who spend their days sitting in offices, it sent them on a code-3 run to the fainting couches.  Exemplifying this type of police bureaucrat is Commander Matt Murray, who addressed the issue on camera with KCNC reporter Brian Maass.  “That word is offensive,” said Commander Murray.  “That word draws emotion out of a lot of people.  That’s not a word we want to hear bandied about.  It’s not appropriate.  It’s unprofessional.”

As Officer Paulsen surely knows, but as Commander Murray perhaps does not, the word is bandied about quite freely in certain parts of Denver, as it is in Los Angeles, Chicago, St. Louis, and any other city you could name.  Far from being offensive, vile, and unspeakable, the word is often and openly employed not only as a noun, but also as a verb, an adjective, an adverb, and as an all-purpose interjection.  And if Commander Murray were to look up the lyrics of some of the more popular rap songs, perhaps those favored by Officer Paulsen’s antagonist in the video, he would find that some of the “artists” are anything but niggardly in their use of the word.  And yet the current social climate demands that we pretend to reach for the smelling salts every time we hear someone say it in public.

Commander Murray may be a nice man, he may have had a distinguished police career before rising to a position that calls on him to make foolish statements in public, but I’m guessing it’s been quite some time since he’s been in a situation like that faced by Officer Paulsen on the night in question.  To whatever small extent that Officer Paulsen may have transgressed, it called for nothing more than a chat with his sergeant out by the gas pumps behind the station.  To see it handled as a formal complaint with a written reprimand is to see the sad state of affairs in the upper ranks of the Denver Police Department.

But it shouldn’t come as a surprise.  A year ago, during an anti-police protest outside the Denver P.D. headquarters, officers were ordered to stand by while vandals poured red paint over a memorial to their comrades who have died in the line of duty, an order the officers found infuriating.  Then as now, it was Commander Murray who was called upon to explain things to a reporter from KCNC.  “We believe it’s better for the community not to have conflict,” he said.

Allowing the vandalism of the memorial was a cowardly act of appeasement to a mob.  Worse, it was an insult to the memory of the officers whose names appear on it, many of whom would not have died had they been as reluctant to face conflict as Commander Murray obviously is.

Body cameras are becoming more commonplace in police work, but if a street cop’s performance is to be judged by someone as out of touch with the realities of the job as Commander Murray plainly is, few cops are going to be willing to take the kind of action Officer Paulsen did that night last October.  He deserved a commendation for his performance, instead he got a reprimand.

I’ve always considered Denver to be a great city full of great people, but I’m glad I don’t work there.