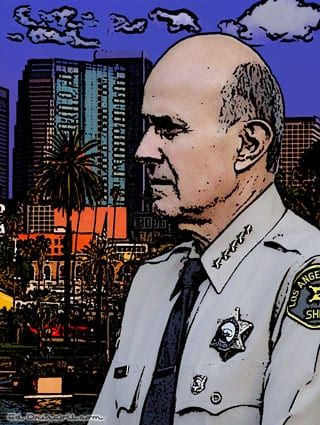 Well, okay.  Leroy Baca, sheriff of Los Angeles County, isn’t really a king and he isn’t really dead, but in modern America there are few political positions that offer the kind of royally unlimited tenure as his.  So when he announced last week that he would soon step down from the post he has held since 1982, the news was greeted with the kind of shock that followed Pope Benedict XVI’s abdication of the papacy last year.

In point of fact, the papacy changes hands more frequently than does the position of sheriff in Los Angeles.  Since 1900, there have eleven popes but only nine L.A. County sheriffs, and until recently it appeared that Baca was a shoo-in for reelection later this year.  But then fate intervened and suddenly, for Sheriff Baca, the allure of a peaceful retirement was too strong to resist.

But will it be peaceful?  I suspect not, as the Sheriff’s Department is embroiled in scandal, the taint of which will follow Baca into retirement like a specter.  Last month, federal authorities in Los Angeles announced criminal indictments against 18 current and former members of the Sheriff’s Department, accusing them of corruption and civil rights violations stemming from incidents that occurred at the Men’s Central Jail.  Deputies are accused of using unlawful force on inmates and conspiring to thwart investigations aimed at exposing the illegal activity.  In one case, deputies are accused of illegally arresting the consul general of Austria and her husband, who were at the jail attending to an Austrian national already in custody.

And it gets worse.  Federal prosecutors allege that when sheriff’s deputies learned that the FBI was investigating conduct within the jail, and that an inmate was an FBI informant, they altered jail records so as to make the informant impossible to locate within the sprawling jail system.  Even more incredibly, some deputies are accused of confronting one of the involved FBI agents outside her home and threatening her with arrest, falsely claiming that they were obtaining an arrest warrant.  Of course it’s only an allegation at this point and the accused are presumed to be innocent, but if this really occurred it’s a sign of a deep malignancy within the department.

I should pause here to point out that I am a member of the Los Angeles Police Department, a wholly separate entity from the Sheriff’s Department.  I have at times in my career worked alongside sheriff’s deputies in multi-agency task forces, and I have often worked in parts of Los Angeles that abut areas patrolled by the Sheriff’s Department, but otherwise I have no avenue of insight into the allegations or the inner workings of the department.

Having said that, it has long been the source of befuddlement to me that the Sheriff’s Department has largely avoided the level of media scrutiny that has been focused on the LAPD.  The reputation of the LAPD in certain parts of the city was for many years that of a brutal, occupying force.  This reputation was undeserved, in my opinion, but it nonetheless persisted until ten or so years ago.  Yet if in, say, 1990, you had gone to the corner of Manchester and Central Avenues in South Central L.A., where the LAPD patrolled one side of Central Avenue and the Sheriff’s Department the other, and if you had asked any of the local hoodlums who happened to be passing by (you wouldn’t have had long to wait) which of the two agencies he would prefer to be arrested by, to a man they would have said the LAPD.  I once asked a young man I had arrested about the Sheriff’s Department’s reputation as compared with the LAPD’s.  “With the LAPD,” he said, “they need a reason to beat you up.  The deputies don’t think they need one.”

Fine.  One man’s opinion, expressed a long time ago.  But on the streets of South Central L.A. that opinion is still widely held among those whose habits and lifestyles bring them into frequent contact with law enforcement.

And in the county jails, the nation’s largest local jail system, the department’s reputation for brutality is just as enduring.  After more than 30 years as a cop, I am no stranger to violence, and I am well aware that the use or threat of force is an indispensable tool when dealing with certain  individuals.  In the county jails, through which pass about 200,000 inmates every year, one does not maintain control just by saying “please” or threatening to withhold television privileges.  Inmates are expected to walk the line, often literally.  Those who don’t can expect, and should expect, to be swiftly corrected if any sense of order is to be maintained.

Still, an acquaintance of mine who serves on the Sheriff’s Department was horrified by his experiences while assigned to the Men’s Central Jail.  Like me, this man understands the role of force in maintaining order, but he also understands that it must be used with restraint and within the law.  “Some deputies in the jails,” he once told me, “just like to beat people up.”

But that may soon change.  The indictments against the 18 deputies has shaken the Sheriff’s Department to its foundation, and Baca’s decision to retire rather than remain in charge can be seen as a sign that further trouble may be coming.  But the irony is that those jail deputies who have acted lawfully (and the great majority of them do) may now be reluctant to use force even when it’s justifiable, with the result being that the jails become even more chaotic than they are today.

And now it remains to be seen who will lead the Sheriff’s Department through the coming months and years of tumult.  As was the case in 2002, when William Bratton was brought in to head the LAPD in the wake of the Rampart scandal, it’s hard to see how anyone high in the Sheriff’s Department chain of command can claim to be untarnished by the current troubles.  On the other hand, it’s hard to see how anyone qualified for the job from outside the department would dare to take it.