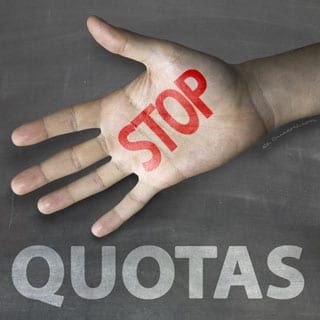 The promotion of diversity has been a well-known feature of the legal profession for many years. Surprisingly less well-known is the imposition of racial quotas on law firms by the actual courts themselves.

So-called “diversity orders” have been issued for years by federal judges in class-action proceedings to mandate that plaintiffs’ counsel be diverse enough to “effectively represent’” their class member-clients. The underlying assumption apparently being that proper representation can only be provided when counsel and class racially concord. Recently, the constitutionality of diversity orders was made the subject of a Supreme Court petition.

The case, Martin v Blessing, was an important one to watch. If review had not been denied, the more ideological judges within the federal judiciary might have seen the decision as a green light to impose more of these types of orders, not only in class-action proceedings, but perhaps elsewhere as well.

The Martin case derives from a 2010 antitrust lawsuit against Sirius-XM Radio, which raised fees on subscribers following the takeover of its only industry rival. Unhappy with the negotiated settlement (plaintiffs got a guarantee that subscriptions wouldn’t rise for 5 months, attorneys got $13 million in fees), class members filed another challenge which also included an objection to a “diversity order” made during class-certification proceedings. Before he agreed to certify class counsel, Manhattan District Court Judge Harold Baer Jr. ordered that they “ensure that the lawyers staffed on the case fairly reflect the class composition in terms of relevant race and gender metrics.” Aware of the huge fees lead counsel roles can bring, the candidate firm apparently failed to mount any protest and dutifully complied with the order.

The possibility of not getting future class-counsel appointments likely explains why the Martin class is being represented by the Center for Class Action Fairness along with the Center for Individual Rights (which has filed a “friend of the court” brief on their behalf), both of which are nonprofit, public-interest law firms. Before the Supreme Court, the claim maintained that Judge Baer’s order directed at counsel amounted to an unconstitutional abuse of discretion.

Although a major issuer of diversity orders, Judge Baer isn’t the only one to use them. Fellow New York District Court Judge Cathy Seibel recently requested that counsel add more female attorneys to their team before certifying a class-action suit against Bayer, the pharmaceutical conglomerate. The legal justification for such orders relies on a very broad interpretation of the Federal Rules of Civil Procedure, which give power judges to appoint counsel in class-certification proceedings. Under the Rules, counsel is to be approved according to their general ability, such as their level of experience and resources, however, a general provision allows judges to consider “any other matter pertinent to counsel’s ability to fairly and adequately represent the interests of the class.”

Nothing in the provision mentions race or gender, however, and letting such an interpretation pass will allow any race-obsessed judge to pursue affirmative action policies by stealth.

Typical of many diversity-proponents, Judge Baer appears to be a member of the Northeastern elite, having graduated from Yale Law School and been a veteran of Manhattan’s judiciary for many years. Of his many diversity orders issued, he has never offered an explanation as to what benefits could flow from assigning class counsel based on race. Needless to say, it’s doubtful Judge Baer sees the irony in attempting to remedy past discrimination (if that is his justification) by discriminating against people because of their race (white) and gender (male). The judge appears to be a perfect example of what a top-notch education in an elite institution can do to one’s group-identity. It is fortunate that a majority of the Supreme Court showed themselves as being less given to the romantic follies of diversity and treated the case in a way that makes equal justice, not social engineering, the agenda of the federal courts.

Ian Smith is an attorney living in Washington, D.C. He is on staff with the Immigration Reform Law Institute.
Read more by Ian Smith