Let's Use All the Data This Time: Are Stand Your Ground Laws Racist?

Since George Zimmerman’s exoneration, Stand Your Ground laws have been under attack. President Obama injected race into the discussion by referring to the “pain” the black community feels over the Zimmerman verdict, and by claiming that the outcome would have been different had Trayvon Martin been white. Speaking at the NAACP convention, U.S. Attorney General Eric Holder claimed Stand Your Ground laws “undermine public safety” and “sow dangerous conflict in our neighborhoods.” Both want these enhanced self-defense laws “reviewed.” (Read: “repealed.”) This rhetoric culminated in state Representative Alan Williams sponsoring a bill to repeal Florida’s Stand Your Ground.

Wildly misleading research supporting the notion that Stand Your Ground is racist has since appeared.

John Roman of the Urban Institute published a report titled “Do Stand Your Ground Laws Worsen Racial Disparities?” After examining the FBI’s Supplementary Homicide data for years 2005-2009, he concluded that when white defenders kill black attackers, “the justifiable homicide rate is 34 percent,” compared to a 3% rate when the defender is black and the attacker white. Roman concluded that Stand Your Ground laws make racial disparities “more pronounced” and are “bad laws.”

Considering that Supplementary Homicide data for the years 2000-2010 were available at the time of Roman’s study, he curiously chose a truncated dataset to “prove” his point. Researchers call this “sampling error,” where an abridged dataset contradicts the findings from all available data.

The entire Supplemental Homicide dataset for the years 2000-2011 clearly shows, like most laws liberalizing the civil right of self-defense, how blacks benefit from Stand Your Ground at least as much as whites.

To determine if Stand Your Ground laws create “racial disparities,” Roman should have addressed questions such as:

Had a legitimate conclusion been the objective, a researcher could have collated the 17 states enacting Stand Your Ground between 2005 and 2007, versus the 19 states that enacted no enhanced self-defense laws. Comparing the two state groupings would determine if old-fashioned self-defense laws make blacks safer.

Splitting Stand Your Ground states into two time periods — pre- and post-enactment — is the first step in discovering this law’s impact. Since 14 of the 17 Stand Your Ground states enacted their laws in 2006, non-enacting states were split into two time groupings that paralleled the Stand Your Ground group: 2000-2005 and 2006-2011. For each “before” and “after” period, justifiable homicides were totaled by defender and attacker race. This creates two comprehensive “before” and “after” datasets, each covering five to six years, that help determine if there were any significant changes in justifiable homicide trends. These data help answer questions like:

Justifiable homicide data serves as an indicator of whether or not Stand Your Ground laws affect black defenders. One drawback with using justifiable homicide data is that the number of incidents is relatively small, and varies annually. Also, some states may go years without reporting an incident. Totaling five or six years together into these before/after pictures helps average out year-to-year variations.

This comprehensive dataset reveals that when compared to non-enacting states, Stand Your Ground states are merely comparable. Since the percent of black defenders killing white attackers is equivalent, Stand Your Ground states aren’t any more “racist” than non-enacting states (see table below showing Justifiable Homicide data collated with Castle Doctrine laws). In other words, it’s relatively uncommon for a black defender to shoot a white attacker, period:

This is also how the Tampa Bay Times misrepresented their data in order to imply that Florida’s Stand Your Ground law favored white defenders: they failed to mention that for most attacks by blacks, the successful Stand Your Ground defenders were black, too. There’s a reasonable explanation for this: Black murder victims get killed by whites only 7% of the time; blacks kill white victims twice as often (14%). Most of the time, murders are intra-racial (blacks kill blacks, 91%; whites kill whites, 83%).

If fewer black defenders killing white attackers indicates racism, then non-enacting states must be “racist,” because black defense against white attackers declined 4.0% between 2006 and 2011, while increasing slightly (0.3%) in Stand Your Ground states.

Another missing context would answer the question: how did private-citizen defenses compare to law enforcement?

If more white police officers killed black attackers after enacting Stand Your Ground, it indicates one of two possibilities. First, if a state is racist regardless of self-defense laws, blaming Stand Your Ground is misleading. Certainly, there are anecdotal reports of institutional racism: for example, NYPD disciplined 17 cops who posted racist Facebook comments about black participants at last year’s West Indian Day Parade.

On the other hand, U.S. Attorney General Eric Holder hasn’t announced an investigation into pervasive bigotry among law enforcement.

The second possibility is that if more blacks were killed while attacking law enforcement officers — who are known to be armed and trained in lethal defense — this indicates increasingly violent behavior among black attackers. (Since cops had no duty to retreat before Stand Your Ground, enactment only affected private citizens.)

More interestingly, white cops in non-enacting states experienced an identical (6.5%) increase in the number of justifiable homicides against black attackers. Nobody’s alleging racism over this trend, and for good reason, which brings up another contextual question: has there been a change in who is committing violent attacks requiring defenders to use lethal force?

Each year, the FBI compiles the number of homicide offenders by race where they know the offender’s race. After 2005, blacks have gradually accounted for a greater share of all homicides, trending from 48% to 50% of all offenders, while white attackers trended from 48% to 46%. This coincides with the national increase in justifiable homicides involving black attackers, and may explain why black attackers account for a larger percentage of all justifiable homicides in recent years: 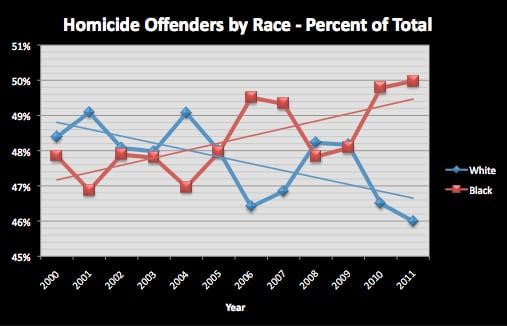 Our president’s administration wants to “review” Stand Your Ground” laws for racial reasons, and “researchers” stepped in to manipulate data to “prove” that Stand Your Ground laws create “racial disparities.”

Citing the same data source and using a complete dataset show that racism isn’t an issue with Stand Your Ground laws, but with those who deliberately ignore facts.