The Mystery of the Missing Crime Data

Many corporate media outlets have been reporting on the new Department of Justice (DOJ) report titled “Firearm Violence, 1993-2011,” which reports that shooting homicides have declined dramatically during the last two decades.

Many outlets published an Associated Press report that drew attention away from the possibility that firearms ownership might reduce crime:

Though researchers differ over all the reasons why gun violence has declined, many attribute it to the aging of the baby boomers. The crime rate was higher in the 1960s and 1970s when many in that large generation were teenagers, an age when higher proportions of people commit crimes.

Crime rates dropped in the early 1980s as that generation aged, rose in the latter part of that decade as the use of crack cocaine grew, then dropped again in the 1990s as the nation’s economy improved, analysts say.

The following graph shows how the shooting murder rate declined 49%, despite an estimated 32% increase in the civilian firearms inventory*: 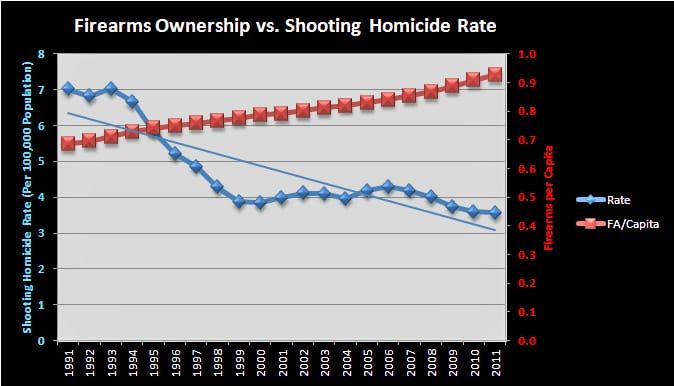 To derogate this “more guns, less homicide” trend, media outlets like New York Times cite the General Social Survey from the University of Chicago (Illinois), stating: “The gun ownership rate has fallen across a broad cross section of households since the early 1970s.” But media ignore their own reports showing an increase in new gun owners.

Gun ownership is even growing in Illinois, where state police are “swamped” by a “huge backlog of applications for Firearms Owner Identification cards,” which are required for legal gun ownership there. CBS reports: “Every month since December has seen a record number of Illinois residents applying for FOID cards.”

Corporate media accurately reported the declines: between 1993 and 2011, firearms homicide deaths declined 39%, and the rate (per 100,000 population) decreased 49%. During this time, the number of right-to-carry (RTC) states — where law-abiding citizens can carry concealed handguns in public — increased from 17 to 40. The drop in homicides probably indicates that concealed carry puts attackers at a disadvantage. FBI crime data supports this premise: Between 2001 and 2011, RTC states averaged a 38% lower homicide rate than carry-restricted states. 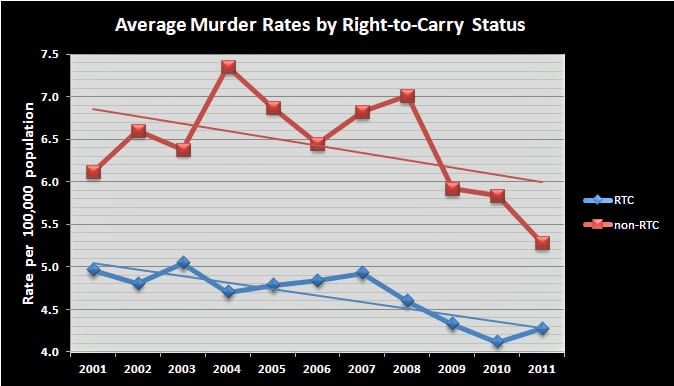 Media ignored the DOJ report when it showed that the number of homicides at school “declined over time.” The following graph shows the long-term trend for ages 5-18. (Of course, the 2012 Sandy Hook mass murder alters the existing trend, but one year is insufficient to declare a new trend.) 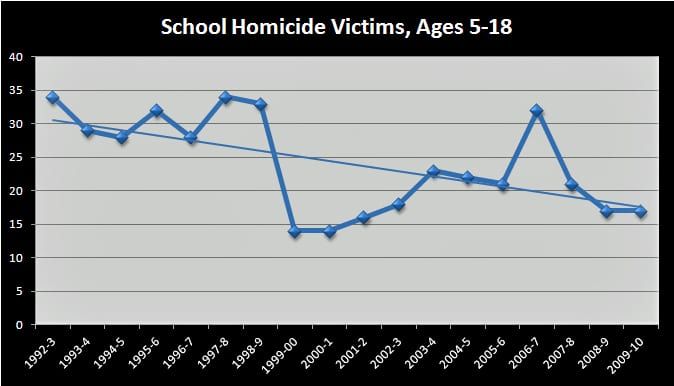 The following table — based upon data from the Centers for Disease Control (CDC) — shows that between 1993 and 2010, the 5-18 age group experienced greater declines in shooting victimization than the rest of the population. (The DOJ authors used the CDC database, too.)

Gun control supporters said the numbers have declined but remain too high, with U.S. rates of gun killings remaining far greater than most other nations.

According to United Nations data, the U.S. has the 92nd highest homicide rate, compared to most other nations.

The DOJ authors noted: “From 1993 to 2010, males, blacks, and persons ages 18 to 24 had the highest rates of firearm homicide.” The Associated Press report included a variation on the race-related message:

Fifty-five percent of gun homicide victims in 2010 were black, far beyond their 13 percent share of the population.

Since 1994, FBI data show that 50% of all murderers are black, far beyond their population share. The following graph shows that black attackers have accounted for a larger percentage of all murders over time, averaging over 50% since 2003. 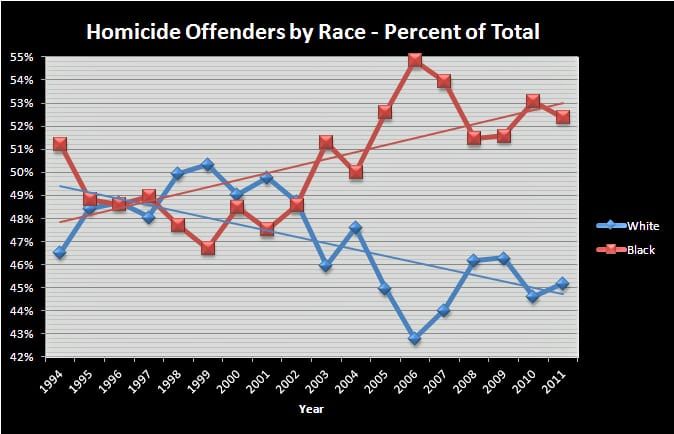 The FBI reports that between 2000 and 2011, black attackers murdered 92% of black victims. A small percentage of the total population is over-represented for both attackers and victims.

Gun control and race appear to interrelate in another manner ignored by corporate media. In 2001, the Brady Campaign to Prevent Gun Violence began publishing an annual report card, evaluating states on their gun-control laws. From 2001 through 2005, Brady assigned an “A” grade to states with the most gun control; “F” graded states had the least. After a 2006 hiatus, Brady returned with annual scorecards, rating states on a 100 point system. States with the most gun control had the highest scores. Brady replaced the earlier 5-grade quintiles with an equivalent star system, allowing consistency in comparing all of Brady’s annual reports. (Four stars equals an “A”; zero stars an “F.”) 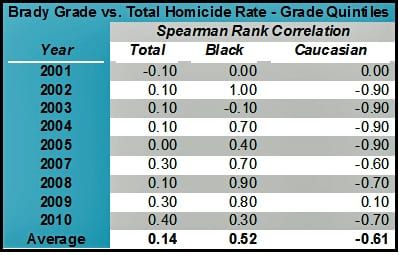 One of gun control’s advertised benefits is that criminals will commit fewer crimes with firearms. However, after collating Brady scores with CDC firearms homicide rates, the following table shows even stronger correlations for blacks and whites. Blacks living in states with the least gun control were less likely to be shot to death. Between 2001 and 2008, whites were safer in states with the most gun control. 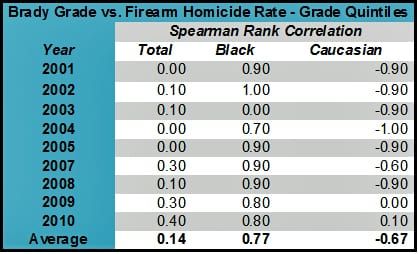 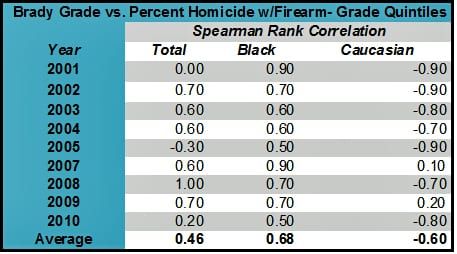 The DOJ reported that “the rate of firearm homicides for blacks declined by 51% … compared to a 48% decline for whites.” Since 23 states enacted right-to-carry during this time frame, raising the total to 40, more blacks now live in RTC states, where they average a 24% lower homicide rate — and 27% lower shooting homicide rate — than blacks living in carry-restricted states.

States with less gun control — Brady’s “worst” states — have higher gun-ownership rates as well as being RTC states, where citizens are far more likely to carry handguns in public.

Yet blacks in these states are the safest.

The terms “firearm violence” and “gun violence” are misnomers that should be removed from public discourse. The attempt to link firearms with violence in people’s minds is misleading at best, and tragically irresponsible at worst. Why does corporate media persist in:

(Note: This report cites numerous Excel workbooks containing source data from the Centers for Disease Control, U.S. Bureau of Alcohol, Tobacco, Firearms and Explosives, U.S. International Trade Commission, and U.S. Federal Bureau of Investigation. It was impractical to include links to all the data from these sources within the format of an online special report.)