Shortly after the 2012 election, the Brady Campaign to Prevent Gun Violence published a press release titled “The Myth of the NRA’s Influence Over Election Outcomes.” Brady claims that the NRA’s support doesn’t help candidates win. They conclude by asking: “How long will we allow this myth to hold our nation hostage?”

Speaking of mythical influences, some readers may find it curious to know that Brady didn’t issue endorsements this election, something they’d done previously. What does this say about their perception of their own influence?

In any case, further examination of NRA-endorsed candidates suggests that Brady may merely be envious.

This majority will be bolstered by 23 “AQ” freshman. NRA gives this grade to a candidate with no Second Amendment voting record, but who’s considered pro-rights based on the NRA-PVF candidate questionnaire. In 2010, the NRA gave 38 freshman House members an AQ grade. In 2012, 36 of these earned A grades, with one B+ and B-; the group averaged a solid A. Assuming that two of the current freshmen fail to uphold the promise implied in their questionnaire, that leaves 21 additional A-graded members for a solid pro-Second Amendment House majority of 241. (See following graph.) 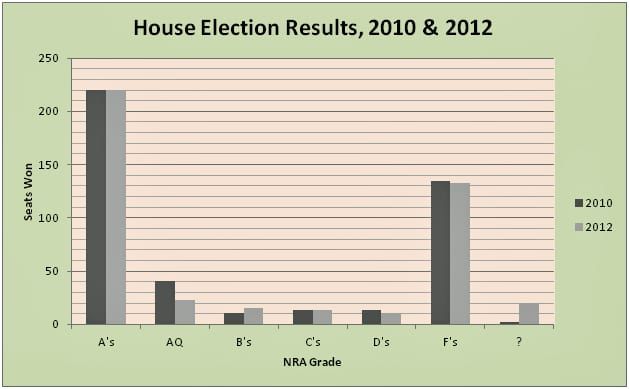 Overall, 350 of the 380 incumbents won reelection (92%). NRA-endorsed incumbents also had a 92% reelection percentage (205 of 222), again indicating no voting bias against Second Amendment candidates. F-graded candidates replaced four of the 17 House seats (16 A’s and one A+) lost by NRA-endorsed incumbents. The remaining ten seats now hold two A’s, one B+, three AQ’s, and six “?” grades, given to those candidates without Second Amendment voting records that refused to answer NRA’s questionnaire.

This was balanced by 19 NRA-endorsed candidates winning open seats (no incumbent running). Their opponents averaged a D+, while the winners averaged A. Also, one F-graded incumbent (Betty Sutton, D-OH 16) lost to A-graded Jim Renacci. Seventeen of these seats averaged a B- in 2010; the other two were new seats created by redistricting.

The following graph shows the House composition including the estimated grades for “AQ” and “?” candidates. Keeping in mind that past performance isn’t a guarantee of future outcomes, it remains likely that the House will continue having a controlling pro-rights majority. 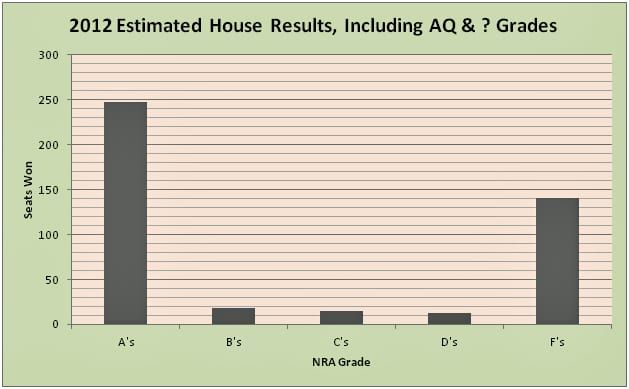 The Senate will include 42 A-graded members (9 A+, 33 A), plus three freshmen senators graded AQ.

While 45 isn’t a majority, remember that 51 senators—some of whom received NRA grades of B or C—signed Senator Jim Moran’s letter to President Obama “expressing grave concern about the dangers posed to Americans’ Second Amendment rights by the United Nations’ Arms Trade Treaty.”

“As defenders of the right of Americans to keep and bear arms, we write to express our grave concern about the dangers posed by the United Nations’ Arms Trade Treaty. Our country’s sovereignty and the constitutional protection of these individual freedoms must not be infringed.”

The average Senate grade for both 2010 and 2012 was C+; the average GPA declined from 2.22 to 2.21. Two seats upgraded from D to A (Indiana, North Dakota) and one from B to A (West Virginia), while one seat (Virginia) declined from A to F, one from C to F (Massachusetts), and one from B to D (New Mexico). This overall lateral movement indicates that Senate elections weren’t about gun control, either.

If the Senate confirmed the UN treaty, under the Constitution’s Article 6 would this treaty would become “the supreme Law of the Land; and the Judges in every State shall be bound thereby, any Thing in the Constitution or Laws of any State to the Contrary notwithstanding”? Constitutional scholar David Kopel of the Independence Institute states that’s not the case: The treaty may not trump the Second Amendment, but will affect its interpretation. In plain terms, this means your civil right of self-defense won’t suddenly and dramatically get stomped into the mud of history; it will gradually get whittled down via incrementalism so that many won’t even know when it was actually lost. 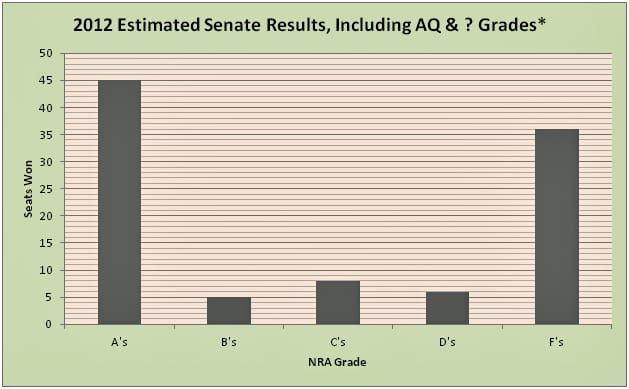 (NOTE: Senate “AQ” candidates were included as A’s because two of them—Rand Paul (Kentucky) and Mark Begich (Alaska)—were graded “AQ” in previous elections and are demonstrably pro-rights. The “?” candidate is assumed to be anti-rights.)

With 52 senators graded C or lower, there’s a risk of a Senate majority supporting Obama’s renewed desire to ratify the UN Arms Trade Treaty. However, the Constitution (Article 2, Section 2) requires two-thirds support to enact any treaty. There appears to be enough solid pro-Second Amendment senators to block such a treaty.

This election, CNN exit polling found that 97% of voters considered the following issues the most important: economy (59%); health care (18%); federal deficit (15%); and foreign policy (5%). CNN didn’t list gun control as most important to the remaining 3%. The 2012 election wasn’t directly about Second Amendment rights, though of course it’s crucial to remember that an anti-rights president remains in office.

The president has already called for a new “assault weapons” ban. As a member of the Senate Judiciary Committee, Senator Dianne Feinstein has also made it a priority to ban the “manufacture or sale of military-style assault weapons,” so it’s possible the Senate will take up this issue soon. In any case, the next four years will require active involvement from Second Amendment supporters.

The Brady Campaign has little influence because it represents perhaps 32,000 members, their public presence reliant upon sympathetic media outlets. Nevertheless, our civil right of self-defense remains under constant threat.

The NRA’s influence exists because of millions of politically active members, despite a generally antagonistic media. To declare this influence a “myth” is part anti-democratic misdirection—and part wishful thinking—by a small group of people wanting to dictate how you live.

The formula for success is simple: Stay involved.