A new report from Syracuse University researchers notes that the Obama administration fails to prosecute violent criminals who most likely contribute to gun-related violence. The Bureau of Alcohol, Tobacco, Firearms and Explosives (ATF) is supposed to investigate and arrest those who violate federal gun laws (e.g., felons in possession, straw purchasers).

Syracuse University’s Transactional Records Access Clearinghouse (TRAC) reports that January 2011 was “the lowest level to which federal weapons prosecutions have fallen since January 2001, when they were 445 at the time President George W. Bush assumed office.” That quote is the basis for this report, because history contains some interesting trends, as shown in the graph below. 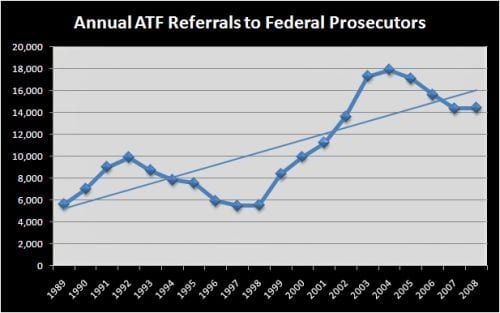 To understand the complete trend, see TRAC’s graph showing the gradual decline in ATF referrals from its peak in 2004 continuing through early 2011. (Annual data for 2009-2010 unavailable for inclusion in above graph.)

When Clinton became president in 1993, his “assault weapons” ban was one of the most sweeping gun control laws ever passed by Congress. But while Clinton sought to restrict gun ownership for law-abiding citizens, criminal prosecution of federal gun laws declined. TRAC data shows that during the Reno Department of Justice (DOJ), ATF referrals for prosecution dropped 44.3% from 1992 to 1998, before rebounding to 1992 (pre-Clinton) levels by 2000.

Here’s another example of Clinton’s attitude of “treat the law-abiding as guilty until proven innocent, but give the benefit of the doubt to convicted felons.” Out of Clinton’s 141 pardons granted on his final day in office, 15 convicts were involved with the cocaine trade and four were firearms related, including one arms dealer.

Who’s more likely to use a firearm to commit a violent felony: a cocaine dealer or a law-abiding citizen?

Ashcroft may have been the most pro-gun attorney general in recent history, authoring an opinion that the Second Amendment was an individual right.

As President Obama indicated during the campaign, there are just a few gun-related changes that we would like to make, and among them would be to reinstitute the ban on the sale of assault weapons.

One of his justifications was that “it would help cut down on the flow of guns going across the border into Mexico.” Said Holder: “I think that will have a positive impact in Mexico, at a minimum.”

Holder didn’t consult Mexico’s homicide data before proclaiming the above assumption. Mexican homicide rates declined from 1997 until reaching a low-point in 2007, three years after the Clinton ban sunset. It began trending upwards again after President Calderon declared war on the cartels, authorizing his military to engage in a domestic conflict.

Not only is Holder prosecuting fewer gun-related felonies, but his DOJ recently “scuttled pending terror finance indictments of several prominent Islamic leaders.” Pajama’s Media’s Patrick Poole reported that “career DOJ prosecutors and the FBI agents who had investigated the case were outraged that the indictments had been nixed by political appointees under Holder.”

Meanwhile, the ATF was busy helping straw purchasers — violators of the U.S. Code mentioned above — move guns from American gun stores into the hands of Mexican drug cartels. An ATF memo shows that since November 2009, 1,725 firearms were purchased under the “Gunrunner” program, with only 250 recovered.

TRAC reports that ATF referrals for criminal prosecution declined 5.4% in the last reporting year, and 18.0% in the last five years.

These data show a consistent trend where presidential administrations — along with their attorneys general — who are most vehement in limiting the rights of law-abiding Americans are the least committed to prosecuting real criminals.