I’ve always thought the IPCC should be considered science fiction rather than science. Literally. Jack Vance, described this past summer in the New York Times Magazine as “the greatest living writer of science fiction and fantasy,” used the acronym IPCC in his futuristic Demon Princes novels to represent the Interworld Police Coordination Company — sort of an intergalactic police force. Our own IPCC — the Intergovernmental Panel on Climate Change — does indeed hope to police the world, but aims to free the Earth of carbon dioxide instead of human (and alien) criminals.

Jack Vance’s IPCC is far more connected with reality than ours.

Our IPCC’s latest fantasy concerns hurricanes, a subject of great interest to a resident of New Orleans like myself.

This is the essence of the IPCC Assessment Report 4 (WG1 chapter 3) executive summary on hurricanes:

Intense tropical cyclone activity has increased since about 1970. … Globally, estimates of the potential destructiveness of hurricanes show a significant upward trend since the mid-1970s, with a trend towards longer lifetimes and greater storm intensity. … These relationships have been reinforced by findings of a large increase in numbers and proportion of hurricanes reaching categories 4 and 5 globally. … numbers of hurricanes in the North Atlantic have also been above normal (based on 1981–2000 averages) in 9 of the last 11 years, culminating in the record-breaking 2005 season.

In reality, hurricanes, in both strength and in frequency, have been decreasing over the past four years. Ryan Maue of the Center for Ocean-Atmospheric Prediction Studies (COAPS) at Florida State University, a hurricane researcher, has shown that “global and Northern Hemisphere tropical cyclone activity remains near 30-year historical lows — three years in a row now of considerably below-average activity globally.” 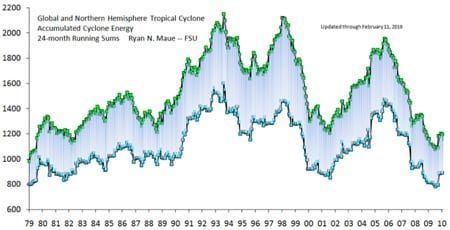 The hurricane energy has been dropping since 2005, and now is at levels not seen since the late 1970s.

The above figure uses a 24-month running sum. If one instead uses a 12-month running sum, one sees that the average hurricane energy dropped this past summer to the lowest level in 30 years: 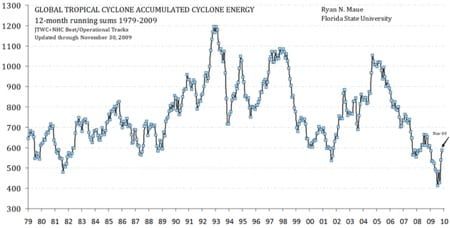 The above graphs only cover the past 30 years, so let’s look at northern hemisphere hurricane total energy since 1970, for the months of May, June, and July:

It is obvious to everyone that the energy of tropical cyclones has been slowly decreasing, not increasing, since the 1970s, at least in the early part of the hurricane season. This data has long been available. To claim the opposite, as the IPCC most recent report did, is intentional fraud.  Many people have pointed out this fraud with the hurricane data, most recently Les Hatton. It is also clear from the first two figures above that the peak of tropical cyclone energy was in the early 1990s, not in 2005. Indeed, Katrina hit New Orleans in the local peak year 2005, but hurricane energy has been decreasing rapidly ever since.

I might also add that, when it hit, Hurricane Katrina had decreased from a Category 5 to a Category 3 hurricane. Had the Army Corps of Engineers kept New Orleans levees in repair, as they had promised, we would have had no flooding in New Orleans. (The Corps does not allow us in New Orleans to repair our own levees, and in fact, has threatened to file a lawsuit to prevent us from looking out for ourselves.)

However, to its credit, the Corps wanted to construct, long before Katrina hit, a flood barrier for New Orleans analogous to the Thames Barrier protecting London. The proposed New Orleans flood barrier, which would have stopped the Katrina flooding, was itself stopped by federal court order after environmentalists filed a lawsuit. Federal government interference has cost us dearly in New Orleans. It has cost more than 1,000 human lives, including a friend of mine. The IPCC hurricane fraud — Hurricanegate — is part of the scientific fraud that underlies modern environmentalism, and the IPCC itself.