Today, Rep. Luis Gutierrez (D-IL) — perhaps the preeminent advocate for “open borders” currently serving in the House — makes an appearance in Richmond, Virginia on the steps of the state capitol building, presumably to fillet Eric Cantor for being the primary roadblock to the House passing an amnesty bill this year.

Interestingly, just days ago Team Cantor, led by direct mail kingpin Ray Allen, direct mailed the bejeezus out of Cantor’s Seventh District with exactly the same message that Gutierrez flew in to give: 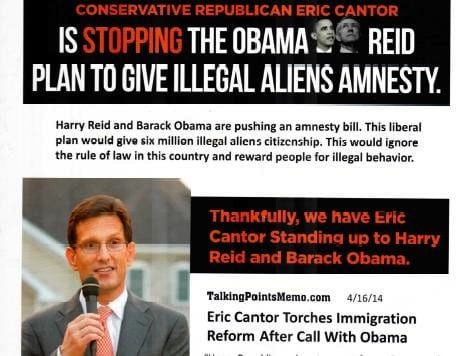 At the Daily Caller, astute Cantor-tracker Mickey Kaus appears to have been first to note Gutierrez’s and Cantor’s seeming win-win. Wrote Kaus:

It sure looks like Gutierrez (who has, after all, gone on tour with Cantor in support of immigration reform) and his allies realize that a shocking Cantor primary defeat would effectively kill off amnesty this year. So they’ve gone into action to help their friend win by setting him up as an anti-amnesty giant — a message that conveniently dovetails with Cantor’s mailer.

Moments ago, I called Rep. Gutierrez’s communication director Doug Rivlin to enquire about the potential “optics” problem/victory. An excerpt:

Steinberg: “Are you familiar with Cantor’s mailer from this week touting himself as an anti-amnesty champion?”

Rivlin: “Yes, I am familiar with the mailer.”

Steinberg: “If Cantor is putting out a mailer touting his anti-amnesty bonafides, you attacking him today as the number one roadblock is a huge plus for Cantor’s primary campaign, correct? Gutierrez is here repeating the exact contact of the message on the mailer that Cantor paid thousands for.”

Rivlin: “This doesn’t have any connection to campaign and politics. Gutierrez is pressuring Cantor, since Cantor controls what comes to the floor. We aren’t paying any attention to Cantor’s primary campaign. The day that Gutierrez does work for Eric Cantor would be an interesting day, indeed.”

Indeed, it was an interesting three days last year, when Cantor and Gutierrez toured together as part of a group intending to promote “comprehensive immigration reform.” At the time, Cantor said of his current foe Gutierrez:

Luis [Gutierrez], the leadership you’re providing through thick and thin right now as we try and navigate these very tough political times in choppy waters. My hat is off to you. I’m very grateful.

UPDATE 1:30 p.m.: Rep Gutierrez tweets a picture from the rally. Note how the signs portray Cantor:

Also of note: the podium bears a sign for “Casa de Virginia,” the group that sent out the press release for this event. Casa’s website describes the organization as the sister organization of Casa de Maryland, an open borders group which has been covered extensively at PJ Media by J. Christian Adams regarding rejected labor secretary nominee Thomas Perez’s work with the group.

‘de Maryland has a 28-year history of activism.

‘de Virginia? Their website appears to have been in existence for about four weeks, and they have done little over that time period besides harass Eric Cantor.

The first post on the site’s “archives,” from the yesteryear fortnight hence of May 13, describes a protest against Cantor receiving an award from the Institute of Hispanic Leadership. Several other posts went up on that day, one on May 14, and then one on May 23 announcing today’s event.

I contacted Casa de Virginia’s listed media contact, Maria Jose Sandoval. She was present at the condo-storming. I questioned her about the site having sprung into existence just this month, and the group having done little but target Eric Cantor as being anti-amnesty just as he attempts to burnish that reputation. I got several answers about the group looking to serve Virginia’s immigrant population just as Casa de Maryland serves Maryland’s; I did not receive any relevant answer regarding the Cantor election and the questionable timing.

I will note that Miss Sandoval answered the phone with just a “Hello,” and we spoke past each other for about 20 minutes without her ever asking me who I was. Definitely not the behavior of a seasoned flack, or, you know, a person who uses the phone. Considering the group’s mere month-long presence on the internet, I’m guessing her resume is heavier on the condo-storming than the media relations.

I also called Sean Higgins, the Washington Examiner reporter — he spoke with Sandoval about the condo incident, and found it bizarre that Casa de Virginia did not issue a single release about it prior to its occurrence. I asked Higgins if he thought it interesting that Cantor is being targeted by this pop-up organization just as Cantor attempts to present himself as anti-amnesty, and he replied: “If they are doing that, they are doing it incompetently. She told me they didn’t send out any release for the condo incident. The only reason anyone in the media reported on it at all? I live nearby and heard the ruckus.”

UPDATED, 2:30 p.m.: Good to see some bipartisan media incredulity. Politico congressional reporter Seung Min Kim live-tweeted the Gutierrez event; the issue was raised at the event, and she used a hashtag to, ahem, question ‘de timing:

Gutierrez says his being here in Cantor’s backyard pushing immigration has nothing to do with his upcoming primary. #ok

I wouldn’t expect Rivlin to see a need to address my call with a statement, but it will be interesting to see if either the Gutierrez camp or the Cantor camp gets spooked by this attention from a favored mainstream outlet like Politico.

UPDATED, 3:30 p.m.: Tangentially related to the news of the day, but another MSM favorite is disseminating the nature of Cantor’s campaign. From FactCheck.org:

A new ad from House Republican Leader Eric Cantor again misrepresents his primary opponent’s role on a state economic forecasting board, and this time the ad misappropriates our credibility by citing a story in which we dinged Cantor for twisting the facts.

Misrepresentation and misappropriation? That’s a timeout in this house.

UPDATED, 7:30 p.m.: Whoa. An AP reporter ventures into the GOP “establishment”/conservative rift, now embodied by the Cantor/Brat race, and manages to avoid committing an act of “Republican anthropology.” Folks, the MSM is involved now, and they got the story just about right. I’ll always recall where I was when read Alan Suderman’s “Cantor Pressured From Both Sides on Immigration“:

White House officials said they wanted to preserve the opportunity for the House to act in the narrow window before Congress’ annual August recess and November midterm elections.

Just how unlikely that is was underscored by Cantor’s response this past week as Brat attacked him on immigration. Cantor sent a flier to voters in his district boasting of shutting down a plan to “give illegal aliens amnesty.”

That strong message was a changed tone for Cantor, who has repeatedly voiced support for giving citizenship to certain immigrants brought illegally to the country as children. Last year Cantor joined Gutierrez and other lawmakers on a three-day tour of immigration-related sites in New York aimed at increasing awareness of the issue.

“I’ve been telling the president, why can’t we do the things we agree on rather than to bring up this whole amnesty bill,” Cantor said Wednesday on Fox News Channel.

Brat dismissed the Cantor’s new tone in his flier as politics and flip-flopping.

Cantor campaign spokesman Ray Allen said Brat is “simply lying” and Cantor has a clear record of opposing “blanket amnesty” while also being open to a discussion on how to fix a broken immigration system.

Other excellent news: Allahpundit jumps in, kindly crediting Mickey Kaus and myself, and making some salient points.

And this, which I managed to miss all day somehow: Mark Levin, crediting my coverage and RedState’s, tore into Cantor’s disreputable tactics last night.