What Is Israel to Do? 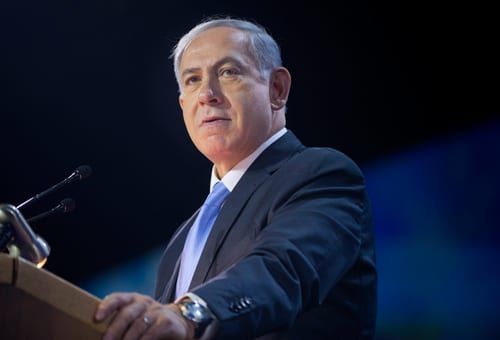 As Israeli Prime Minister Benyamin Netanyahu prepares to address Congress on the “Iranian file,” it is undeniable that Israel is confronting another — and perhaps the most crucial — existential crisis in its volcanic history as a legitimate state. It has successfully met every threat to its survival from its founding to the present, but the specter of a nuclear Iran, which has vowed to erase Israel from the map, has raised the stakes to a new and unprecedented level.

Israel has always relied on its pluck, resourcefulness and ingenuity to defeat its enemies’ plans and initiatives. But what can it do, friendless and encircled, against 130,000 Iranian and Iranian-backed troops massing in southern Syria and the Syrian Golan while the chief instigator of its destruction hurtles towards nuclear and ballistic capability — with, be it said, the complicity of the White House and the support of its European hangers-on?

We suspect with reason that Barack Obama is salivating at the prospect of Israel’s reduction and will not lift a finger to help in its hour of need. In fact, he will make it more difficult for Israel to resist, as he did during the last Gaza war by withholding critical arms shipments and imposing a ban on flights into Ben Gurion International Airport. He is doing something similar now by opposing Netanyahu’s speech to Congress, slandering the Israeli prime minister at will and interfering in Israel’s political scene by funding left-wing, anti-Likud NGOs and advocacy groups in order to sway the Israeli electorate. The list of his scandalous and destabilizing actions against Israel, as Caroline Glick has made amply clear, is interminable.

Unfortunately, Congress cannot effectively over-ride the presidential veto and the application of executive privilege. The majority support of the American public for Israel’s welfare means nothing to Obama; after all, this is the man who, after the resounding mid-term congressional defeat of his party, claimed he is responsive to those who didn’t vote. The failure of the American Jewish left and moderate assimilationists — the ADL, AIPAC, J Street and others — to understand Iran’s avowed intentions and to intercede on Israel’s behalf, or at the very minimum to cease flagellating the Israeli prime minister for his efforts to defend his country at this most perilous moment, has left Obama with a free hand to pursue his anti-Zionist campaign. For the next two years at least, Israel’s American ally will be moribund — which is to say, adversarial — owing to the Agagite in the Oval Office.

As for Europe, it is demonstrably experiencing a resurgence of its morbid, inbred, centuries-long anti-Semitism; with the exception of smaller countries like Czech Republic and Bulgaria, it is one of the Jewish state’s most dedicated enemies. There is small consolation for Israel in that Jew-hating Europe will inevitably reap its reward, thanks to Europe-hating Muslims.

The principal Sunni Muslim nations sympathetic to Israel’s struggle against the maniacal Shi’ite regime cannot afford the optics of conspicuously coming to Israel’s aid, apart from the fact that Saudi Arabia is preoccupied with the menace from Yemen and Egypt is engaged in fighting Hamas and its terror affiliates in the Sinai.

The unlikely prospect of a “peace-keeping” force stationed in the region would be utterly useless in any case, given that its only four alternative courses of action are: the propensity for being taken captive; the tendency to flee at the first sight of trouble; the custom of merely observing (i.e. doing nothing); and the habit of siding with the aggressor.

Ultimately, we come back to the beginning. Assuming that the country possesses enough electoral wisdom to keep the left from exerting undue influence and enough intellectual savvy to disregard what Glick calls “the pathologically hateful Israeli media,” it must continue to rely on its proven pluck, resourcefulness and ingenuity — and on the courage and self-sacrifice of the best fighting force in the world. Some would add the power and compassion of Yahweh into the mix, and who knows, they could be right. May it be so, however debatable. With enemies at home and enemies abroad, Israel needs all the help it can get.