'This Nonviolent Stuff’ll Get You Killed:' Guns and the Civil Rights Movement 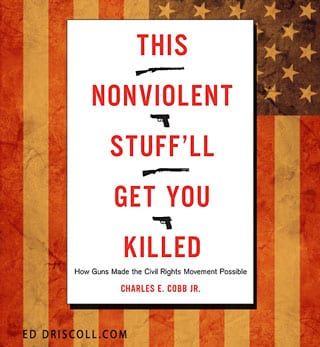 I was recently given the opportunity to read an advance copy of Professor Charles E. Cobb, Jr.’s This Nonviolent Stuff’ll Get You Killed: How Guns Made the Civil Rights Movement Possible, coming from Basic Books in June. This book will have readers who might have nothing else in common politically reaching for a copy.

Professor Cobb currently teaches Africana Studies at Brown University in Rhode Island. Every once in a while, this book will remind you that Cobb’s politics are very markedly to the left, except on the issue of gun control. I suspect that more than a few of Cobb’s associates will be either scratching their heads or filled with fury.

Cobb’s book is both a history of the civil rights movement and a memoir of his involvement. Cobb was a field secretary for the Student Nonviolent Coordinating Committee (SNCC), one of the front-line civil rights organizations in the 1960s South. As the name suggests, SNCC — like many of the civil rights organizations — eventually adopted Dr. Martin Luther King, Jr.’s belief in peaceful non-resistance. But as Cobb’s book explains, even Dr. King was not initially prepared to turn the other cheek.

Sympathizers described Dr. King’s house in the 1950s as an arsenal. Dr. King was not unique: as Cobb’s book explains, idealistic young men and women like himself with college educations and often from Northern cities could adopt the idea of non-violence at least in part because the Southern blacks that they had come to help were under no illusions of how well this idea of non-violence would work.

Many of these realistic Southern blacks were not young. Cobb recounts the story of an 80-year-old woman who had finally, because of the voter registration drives, been allowed to vote. She walked up to Stokely Carmichael, one of the civil rights organizers, outside a polling place, “and produced this enormous, rusty Civil War-looking old pistol. ‘Best you hol’ this for me, son. I’ma go cast my vote now” (p. 3).

Many of the Southern blacks prepared to use guns in self-defense against the Klan were veterans of World War II and the Korean War, where they had learned self-confidence in combat and that being armed was part of what made you a citizen.

In other cases, the willingness to fight back involved less abstract concepts than voting. Cobb describes Lou Ella Townsend, a Mississippi cotton farmer who regularly carried a Luger pistol with him in the fields. One day, a white man on horseback saw Townsend’s teenaged niece in the field, and told her “that he intended the take the girl back home, and also that he was going to beat her niece so she would know her place.” Townsend made it clear that doing so would be his last action on Earth. “Of twenty-two brothers and sisters in [Townsend’s] family, she and two others were the only children who were not the product of rape by white men” (p. 94).

Cobb describes how the increasing use of federal law against lynchings in the 1950s played a part in restraining the most outrageous forms of anti-black violence, but the relatively relaxed gun control laws of the South and the widespread culture of gun ownership played a part as well. “Nighttime marauders had learned to keep a more respectful distance from their targets because the targets were increasingly prone to shoot back.” The return of so many combat-experienced black soldiers from the two wars meant that terrorizing blacks was no longer a risk-free activity (pp. 123-4). Indeed, it could and sometimes did get Klansmen killed.

Some of the incidents that Cobb describes are pretty funny, at least to those of us who are gun rights activists. Dr. Theodore Howard, a surgeon in Mississippi, was a local civil rights leader. He had no illusions about the effectiveness of non-violence. A reporter from Ebony magazine who came to interview Dr. Howard had trouble opening the front door; “a stack of weapons was blocking the door.” Another visitor reported “a magnum pistol and a .45-caliber pistol at the head of Howard’s bed; a submachine gun rested at its foot. He also saw ‘a long gun, a shotgun or a rifle in every corner of every room’” (p. 132).

Paranoid? Not at all. A friend of mine, Don Kates, one of the senior members of the gun rights legal community, has written that this was an era when Ku Klux Klan dues were collected at the nearest sheriff’s substation. In many parts of the South, the police and the Klan were one and the same. After Rev. George Lee was shot to death driving home from a civil rights meeting, the sheriff insisted that “the lead pellets found in what was left of his jaw might be teeth fillings.” It was, you see, just an odd traffic accident (p. 135).

I am hoping that those curious about the civil rights movement are going to realize the positives of gun ownership from this book. Indeed, Cobb makes the point that without widespread gun ownership, the civil rights movement would not have survived long enough to register voters. The KKK were domestic terrorists, and only force meeting force would restrain them, especially when they were also the local law enforcement agency.

I also hope that those on the right will read this book and perhaps understand why some of the people that participated in the civil rights movement back then seem more than a little crazy about the issue of race. These were terrifying and traumatic times. Many people are frozen by particular events and experiences, and reading a book like this may help better understand why the rapidly aging black leadership of America sees everything in racial terms, even when the circumstances that provoked those concerns are now just pages in a history book. It is very easy to be trapped by the past; it is better to learn from it.