As predicted was inevitable, today the Spanish newspaper La Gaceta runs with a full-page article fessing up to the truth about Spain’s “green jobs” boondoggle, which happens to be the one naively cited by President Obama no less than eight times as his model for the United States. It is now out there as a bust, a costly disaster that has come undone in Spain to the point that even the Socialists admit it, with the media now in full pursuit.

Breaking the Spanish government’s admission here at Pajamas Media probably didn’t hurt their interest in finally reporting on the leaked admission. Obama’s obvious hope of rushing into place his “fundamental transformation” of America into something more like Europe’s social democracies — where even the most basic freedoms have been moved from individuals and families to the state — before the house of cards collapsed has suffered what we can only hope proves to be its fatal blow. At least on this front.

La Gaceta boldly exposes the failure of the Spanish renewable policy and how Obama has been following it. The headline screams: “Spain admits that the green economy as sold to Obama is a disaster.” 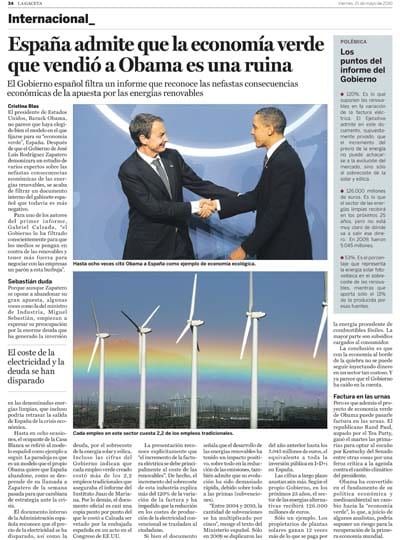 This is now an explosive scandal in Spain, coming on the heels of shabby treatment over there in payback to an academic team for having pointed the disaster out (joined by equally shabby treatment by the Obama administration).

I’d say “I hate to say I told you so,” but I revel in it. My only regret is that they couldn’t have admitted it about three weeks ago to coincide even more perfectly with the release of Power Grab: How Obama’s Green Policies Will Steal Your Freedom and Bankrupt America. In the book, I detail the folly of Obama’s claims about European “green economy” miracles and what cramming them down here means for you, unless you stand up and fight back now.

The man who exposed the disaster, Dr. Gabriel Calzada, kindly praises the dissection of “free ice cream” “green jobs” economics on the jacket. That fight begins anew next week with the likely Senate vote on S.J. Res. 26, the Murkowski resolution to disapprove of the Environmental Protection Agency’s attempt to impose much of this agenda through the regulatory back door without Congress ever having authorized such an enormous economic intervention. Read Power Grab to get your head around the numerous fallacies and fabrications, and give Washington hell.

(An English translation of the La Gaceta article is provided on page two.)

The Spanish government leaks a report that admits the ominous economic consequences of betting in favor of renewable energies.

The president of the United States, Barack Obama, doesn’t seem to have chosen the right model to copy for his “green economy,” Spain. After the government of José Luís Rodríguez Zapatero demonized a study of different experts about the fatal economic consequences of renewable energies, an internal document from the Spanish cabinet that it is even more negative has just been leaked.

To one of the authors of the first report, Gabriel Calzada, “the government has leaked it intentionally in order to turn the media against renewable energies and to be stronger in negotiations with businesses.”

Because even though Zapatero himself opposes abandoning his grand bet, some voices — such as  the minister of Industry, Miguel Sebastián — are beginning to express their worry over the enormous debt that has been generated by the investment in so-called clean energies, which could even delay Spain’s exit from the economic crisis.

On eight occasions, the occupant of the White House referred to the Spanish model as an example to follow. The paradox is that it is a model that Obama himself wants Spain to abandon, as made clear in his call to Zapatero last week in which he asked him to change his strategy on the crisis.

The internal report of the Spanish administration admits that the price of electricity has gone up, as well as the debt, due to the extra costs of solar and wind energy. Even the government numbers indicate that each green job created costs more than  2.2 traditional jobs, as was shown in the report of the Juan de Mariana Institute. Besides that, the official document is almost a copy point by point of the one that led to Calzada being denounced [lit. “vetoed”] by the Spanish Embassy in an act in the U.S. Congress.

The presentation recognizes explicitly that “the increase of the electric bill is principally due to the cost of renewable energies.” In fact, the increase in the extra costs of this industry explains more than 120% of the variation in the bill and has prevented the reduction in the costs of conventional electricity production to be reflected on the bills of the citizens.

If the document indicates that the development of renewable energies has had a positive impact, especially in the reduction of emissions, it has also admitted that the evolution has been too fast, due to subsidies.

“Between 2004 and 2010, the quantity of subsidies has been multiplied by five,”,says the text of the Spanish Ministry. In 2009 alone they were doubled from the previous year to 5,045 million euros, the equivalent of the whole public investment in I+D+i [“Investigación + Desarrollo + Innovación tecnológica”, or “research, development, and technological innovation”] in Spain.

The numbers in the long run are even scarier. The government itself says that the alternative energies sector will receive 126 billion euros in the next 25 years. Just an example: The owners of solar plants make 12 times more than what they pay for the energy coming from fossil fuel combustion. The majority are subsidies charged to the consumer.

The conclusion is that with the economy at the point of bankruptcy, it is not possible to keep injecting money in such a costly sector. And the government seems to realize this now.

But aside from all this, Obama’s green energy project might cost him votes. The republican Rand Paul, animated by the tea party movement, won the primary on Tuesday for Kentucky’s U.S. Senate seat owing to, among other things, being a fierce critic of the president’s agenda on climate change.

Obama has made the focus of his economic and environmental politics a change towards a “green economy,” which, to the judgment of some analysts, could be a risk for the recovery of the world’s biggest economy.

Christopher Horner is a senior fellow at the Competitive Enterprise Institute, and author of the recently-published The Liberal War on Transparency: Confessions of a Freedom of Information "Criminal".
Read more by Christopher Horner