Fear and Loathing (of the U.S.) in London Town

Right now it sure as heck is not sexy being Jewish. In the heady days of Schindler’s List and Nobel Prizes going to Arafat, Rabin, and Peres, the world loved Israel, Jews, America, and Bill Clinton. Notwithstanding the fact that even then I was threatened with death for wanting to make a friendly neighborhood documentary about a year in the life of the Regent’s Park Mosque, the Oslo era was a collective tea party compared with 2009 Britain.

To compound the issue, if one is American there is a problem, too, because many Britons equate the accent with “Zionism.” That is a double whammy. If anyone thinks anti-Americanism evaporated on November 5 they are mistaken. Gaza and the many Jews with whom Obama surrounds himself have made a lot of people over here very crazy indeed.

What I have found interesting have been encounters with young people of all persuasions since November 4; they have been Jewish, Christian, Muslim, or of no faith but all have continued to wish to lash out at Americans.

I went to Langham Place in central London on January 24 to hear the latest incendiary rhetoric about the genocidal, “modern Holocaust-making” state of Israel and its apologist, the BBC. (Yes, that is correct: the latest hysteria in Britain revolves around the BBC being cowed into refusing to air a charity appeal for Gaza because it has been bullied by the Zionist lobby. The weeping Oscar-nominated actress Samantha Morton declared she would never work for the BBC again. This is a supreme irony because the Beeb is not exactly a mouthpiece for the purveyors of hasbara.) 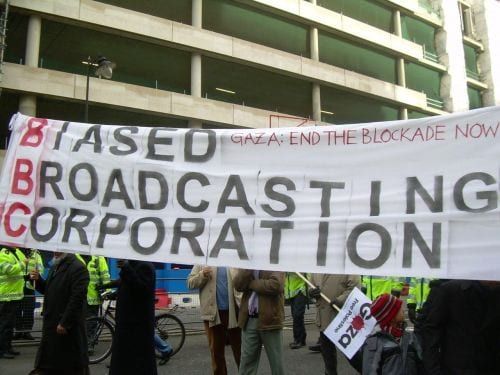 Thousands of people from the British Isles had descended on BBC Langham Place to vent their spleen. One of the speakers lambasted the Jewish Chronicle newspaper for having printed a full-page appeal for £15 donations to buy small care packages for Israeli soldiers. The speakers, shouting with an almost crazed passion into the megaphones, accused the newspaper, its publishers, its readers, and the folks sending the wee £15 checks of aiding and abetting war crimes. They screeched that instead of “criminal Zionist newspapers” sending care packages to soldiers, the IDF should be collectively had up for war crimes. It must be stressed that speaker after speaker, as well as the waves of humanity, were white middle-class Britons, cheered on by hordes of very, very angry young Muslim boys and girls. 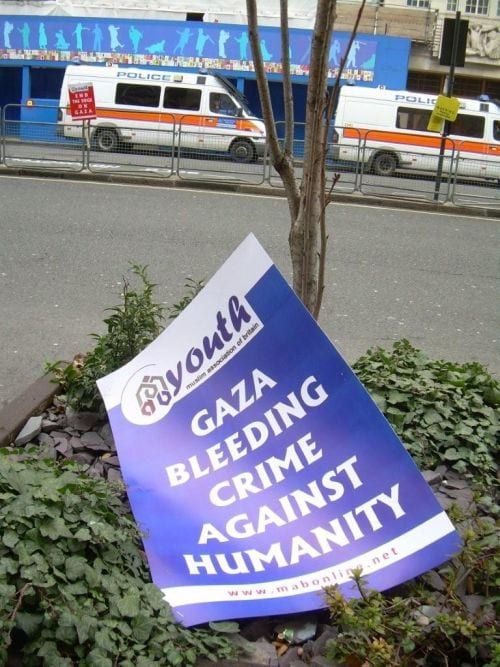 One of the placards read, “No to Liebensraum”; I was bemused because I thought this meant “no to all-consuming love.” I asked the elderly Briton with the placard to translate and he growled, “the Israelis are recreating ‘Lebensraum‘ with expansionist policies across the Middle East and are behaving exactly like the Nazis.” I suggested he read an article by the usually Israel-bashing Robert Fisk of the Independent, who on January 17 asked anti-Israel activists to cease and desist from lumping the Gaza conflict with the Holocaust. Fisk, usually renowned for his anti-Zionist rants, actually asked Palestinian demonstrators if they had ever stopped to think of how painful it is for Israeli Shoah survivors to be lumped with Nazis. 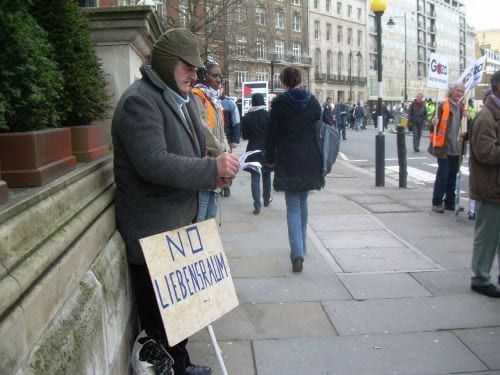 I decided to leave Langham Place, as the hatred and simmering aggression in the crowd scared me, and began my walk home.

Here is a rundown of the Obama-era hatred I have witnessed in London in recent weeks:

Just before the election, on October 30, I attended a lecture at the House of Commons by U.S. Homeland Security Secretary Michael Chertoff. Afterwards I was surrounded by a group of young interns. I decided to play devil’s advocate and say it was my impression that the likes of Keith Olbermann, Jon Stewart, Stephen Colbert, and Bill Moyers had influenced the thinking of Americans to such a degree that the liberal regime would soon be in place. To my astonishment this crowd of youngsters told me that “Americans are too thick to be influenced by anything: they just drink beer and watch football.” None had ever been to the U.S. but their loud protestations included the usual accusations of American racism and violence. Myself a Rush–O’Reilly–Hannity fan, I was nonplussed that I could not even defend liberal America. This smart-aleck crowd of aggressive youngsters would not let me get a word in edgewise. One angry Jewish girl was determined to make it clear to me that America was a giant cesspit of idiots and rednecks. Their irrational anger brought to mind an apoplectic Englishman who had left me speechless at a January 2002 dinner party by telling me that Al Gore was a “fascist reactionary Christian right-winger just like George Bush.”

On November 19, 2008, I attended a talk at St. Paul’s Church Marylebone about the medical ethics of embryo research in the context of doctors who are people of faith. I asked a question at one point; because of my American drawl I found myself confronted after the lecture by a group of young Christians. Naively thinking they would want to know “from the horse’s mouth” the background of the Obama victory, I was instead hit with a barrage of verbal abuse from a hostile young lady, homing in on my “having centuries of black blood” on my hands. She asked me, “Just how does it feel? How does it feel?!” Trying to explain that though some of my antecedents had indeed settled in the South, my penniless, Yiddish-speaking grandparents had emigrated from the pogroms of Poland. She said her American flatmate was the single most selfish, callous bitch she had ever met and was typical of Americans who don’t care on whom or what they tread.

She continued to chastise me about the genocide and racism that characterized America and her boyfriend laid into me, saying, “America is just one big nuisance.” His scowling antipathy was breathtaking. I asked him if he really meant that and he said, yes, the U.S. had been a nuisance for a century and ought to be brought to book for its transgressions.

This made me see red. I felt like the “sleeping giant” awakened by Yamamoto after Pearl Harbor. It was, after all, the week of Remembrance Day. I had just been watching the many television films about war veterans. I had recently visited Madingley and Duxford, where 30,000 dead American airmen are commemorated, so I asked this angry young man if the 10,000 American graves at Omaha Beach were a “nuisance.” He snarled, “Oh don’t start with that war business!” and stormed off.

Their tirade, with an adoring audience of older churchgoers glaring at me, made me realize that the United States, Obama or not, still so enrages the world even when its young men die crossing oceans to end European wars and to be slaughtered on Pacific islands. That brings me to Israel.

The controversy raging about the BBC and Sky News refusal to air the Gaza appeal by the DEC charity has generated some of the ugliest Jew-hatred I have experienced in my adult life. In mid-January I stopped to look at a large poster placed against a wall in Kensington High Street, where a Starbucks had been smashed up by anti-Israel protestors. (Starbucks in the East End, Piccadilly and Shaftesbury Avenue, had also been trashed because “Howard Schultz is a Zionist.”) The poster that attracted my attention said, “First there was Nazism, then there was Apartheid, now there is Israel.” Again, I saw red.

What ensued was a salutary experience for me: two young, eloquent, and attractive Palestinians told me that Israel was not a state, that for sixty years their people had been living in poverty, and that the billions in aid from the EU and Arab League did not exist. I told them that aid had been expropriated by corrupt leaders and they said I had been “brainwashed” by the Zionists. I tried to educate them with some basics of twentieth-century history and they shouted at me that this was bunkum generated by the Zionists “brainwashing” all of us gullible post-war babies. Their anger and hatred was impossible to navigate.

So was the anger of one Israel-loathing Baroness Tonge, who accused Jewish Chronicle editor Stephen Pollard of “using those crib notes provided by the Israeli embassy” when he attempted to participate in a debate on BBC’s Question Time of January 22. On BBC Radio Four’s Any Answers in mid-January a string of callers was allowed to provide a stream of accusations against the “American Jewish lobby already driving Obama’s agenda” along with diatribes against the British “Zionist lobby” (all pathetic 260,000 of them, up against 60 million Christians and 2.4 million Muslims); this all culminated in an immensely elegant woman saying to me at an Obama ball in London, which I attended as press, “It is time the love affair with the Jews came to an end.” Everyone at the table agreed. Nice.

If readers will notice, I have not brought the scumbag Bernie Madoff into the equation; believe me, the Muslim and white-supremacist hate sites are having a field day celebrating the “villainy of the Jews.” The accompanying hatred of Israel and of America for its support of the Jewish state makes for a heady mix.

In a debate with Chief Rabbi Sir Jonathan Sacks six years ago, Dr. George Steiner said Jews should always have a bag packed. Sacks, an assimilated Briton, disagreed. So did I.

These days would I feel safer in a bomb shelter in Sderot than in a café in London Town? I think so.