I attended the hate-Israel rally held in London’s Trafalgar Square on Saturday, January 3. Some may say I am nuts; I like to think I am showing a little of the same courage that Israeli soldiers are now displaying as they go into the hell of Gaza. My late mother was a WAC in World War II, as was my aunt, who served with the army of occupation in Japan. My sister is a tough cookie and we even have a female cousin who, family lore has it, fought for Trotsky and was shot by a firing squad. My late father marched on Harrisburg when blacks were not allowed into a civil engineering organization.

So, DNA pumping away, in I marched. I witnessed crowds of very angry white, middle-class, respectable Britons wearing keffiyahs and piling onto the Tube from the very start of the Northern Line in faraway Barnet. As my train approached Charing Cross station I realized that if I had identified myself as sympathetic to Israel’s plight I might have been attacked. In Trafalgar Square itself thousands of even angrier people milled about; young men in keffiyahs chanted epithets against Zionists, their fury accompanied by placards with Stars of David superimposed on swastikas and slogans denouncing genocidal, war criminal Israel.

There were Jews for Justice for Palestinians and hundreds of communists, socialists, and revolutionaries who in their youth had all lived on kibbutzim but who now hate the “imperialist Jewish state.” One priceless poster said “Let Iran Have Nuclear Weapons.” I challenged the owner that the Campaign for Nuclear Disarmament opposed all nuclear weapons and he bellowed down at me — he a big fella, me a tiny Ashkenazi blob — that the region had to protect itself against Israel. Another choice piece of posterdom bore a pronouncement about the Arabs being starved because of Israeli produce being farmed. I reminded its perpetrator that there are over a million Arabs living inside Greater Israel and that the reason why they don’t all run to escape to the West Bank and Gaza is that they have a pleasant life with a wage, a mosque, freedom of the press, and the right to conduct business. One non-Muslim stall holder who was banging on at me about the oppression inside Israel was lost for words when I explained that in Haifa and Jaffa I have seen Jewish and Arab retirees playing cards in Arab-run cafes. A British gentleman selling soaps from Nablus tried to explain oppression with a poster of “disappearing Palestine” and that “these are from the West Bank”; I reminded him that Rabin had given back Nablus and Bethlehem and that Begin had given back the Sinai. 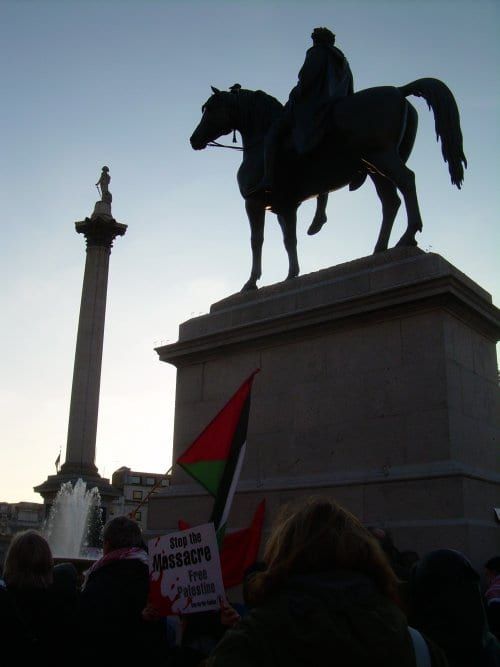 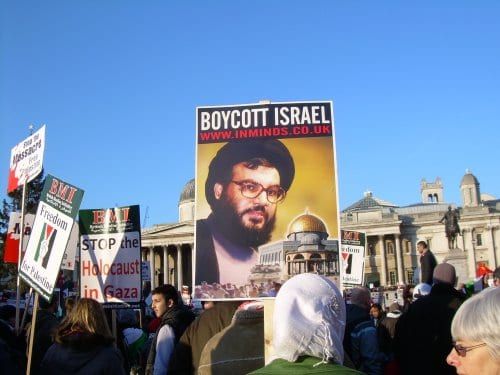 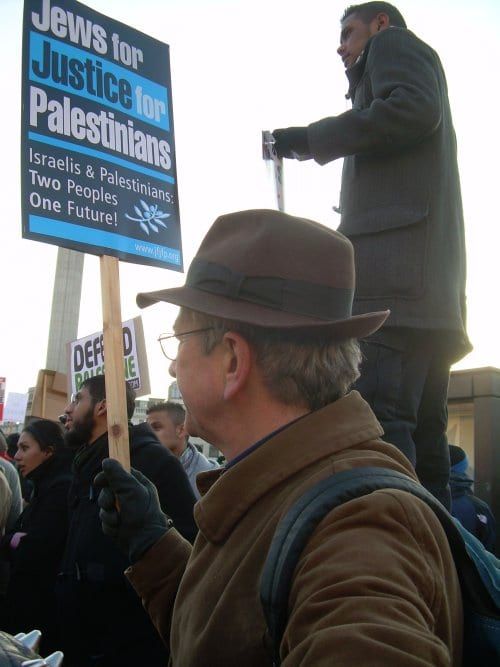 Of the scores of leaflets and books being sold in the Square one stood out: entitled “The Nakba (Catastrophe)” and written by Anne Alexander and John Rose, it tells us that “the ethnic cleansing of Palestine” involved the founding fathers of Zionism exporting European fascism and creating a colonial hub in Palestine. With the little matter of the Holocaust being far less important than “Zionist land grabbing,” this screed informs us that the Zionists of 1947 were planning a “ruthless assault” on the Arab population of the region. What is interesting is that this narrative reiterates the issue that dominates the current discourse in Britain: why is it that so many Arabs always die and so few Jews? This was asked of me in the Square. I replied: “Okay, if you are unhappy that so few Jews are dying right now, start by killing me.” Monographs like this spend page after page asserting that the creation of Israel was the worst catastrophe inflicted on the world in modern times. Imagine the uproar if someone produced a work about the “catastrophe” of the creation of the Islamic state of Pakistan during partition in the same year that Israel was created, when a million Indian Hindu, Sikh, and Muslim souls died in brutal violence.

The atmosphere at the January 3 rally, at which visceral speeches about the evil, murderous, criminal, genocidal Zionist entity were delivered hour after hour by what seemed to be endless streams of angry British protesters — former Mayor Ken “I would never have created an Israel” Livingstone and Jewish comedian Alexei “I am ashamed” Sayle among them — became incendiary when a speaker invited the crowd to march to the Israeli embassy in Kensington. Next to me several young Muslims in green Hamas scarves wielding large sticks were booked by the police. Later a large crowd of some 5,000 infuriated protesters descended on the Israeli consulate, burned Israeli flags, and hurled missiles whilst another crowd threw hundreds of shoes at Downing Street. It was a gloriously sunny midwinter day so in Portsmouth, Glasgow, Exeter, Edinburgh, Bristol, Liverpool, Norwich, Hull, Tunbridge Wells, Leeds, Manchester, Newcastle, Swansea, York, Caernarfon, Bradford, and Sheffield angry citizens cried out against “Zionist oppression,” demanding boycotts of Israeli goods. They brought along their children so they would learn early about the “Zionists stealing the land in 1948 and driving the entire populations of Arabs out of their homes.”

I reflect for a moment: On July 7, 2005, three London underground stations, each over a hundred years old and undamaged until then even by Hitler’s Blitzkrieg, were bombed by British Muslims angry about the Iraq War. On July 21, 2005, Anglo-Muslims set about a plot to blow up more buses but were arrested when their devices failed. In 2006 and 2007 various spectacular bomb and “airline liquid explosive” plots were foiled by the brilliant British intelligence services, and in June 2007 devices that would have caused devastation in London’s West End had they not failed to detonate were placed near crowded nightclubs. That same weekend British Muslims, including an NHS doctor, tried to blow up Glasgow Airport. Did the British government crack down on militant organizations and jail masses of Muslims? No. Instead the public discourse was filled with angst about the “rage” amongst young British jihadists. Families of those killed in the July 7 bombs expressed their own despair at the Iraq situation.

What am I getting at? That Israel should have “deep public discourse” about the rage of Hamas extremists and not bomb Gaza rocket installations?

No. What I am saying is that there is a truly frightening and medieval hatred of the Jewish state erupting in Britain that tells me the following: 1) It does not matter that Muslims are killing Muslims every day across the globe but it does matter to these angry crowds that Jews are killing Muslims in Gaza. 2) It does not matter that Zimbabwe is on its knees but it does matter that “apartheid Israel is committing a genocidal crime.” 3) The Palestinians, funded with billions from the EU, USA, and countless other organizations, nevertheless languish in perpetual poverty, but their noisy supporters across the globe are accusing Israel of generating a “holocaust,” a comparison the gallant Peter Whittle of New Culture Forum finds disgusting and shameful. 4) The hatred in the faces of the people I saw at the Gaza rally is a manifestation of years of distorted coverage of the story of the region that has now culminated in attacks on Jewish targets in London. 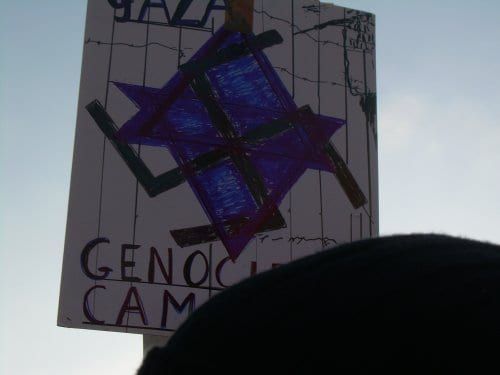 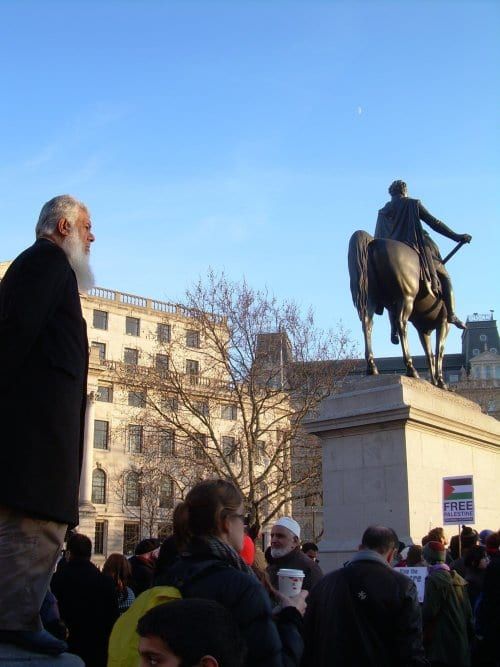 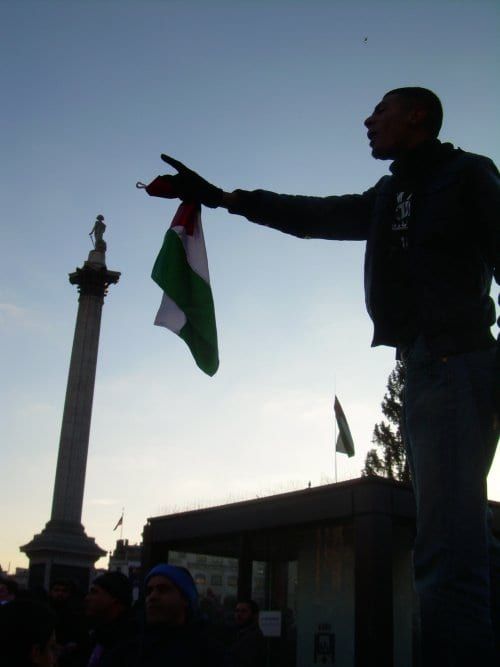 I can already hear the anti-Zionist movement saying, “Aha! You prove our point! Britain showed admirable restraint in not retaliating after the terror attacks but Israel commits war crimes when homemade rockets are lobbed into Sderot.” Frankly, many Britons would have liked to have seen severe measures taken against radical groups but even the Blair government was lamentably lenient. At the rally one demonstrator argued with me that Britain never bombed Northern Ireland even when attacks were killing soldiers and civilians on mainland Britain; I argue that the tiny state of Israel has been fighting an existential battle for 60 years in war after war against hostile neighbors bent on its annihilation, and that most of the world sees it as a pesky conurbation of Jews whom it wishes would fall into the sea.

As Anglo-Jewry battens down the hatches amid an already worrying wave of attacks and as I read the pulsating words of Phyllis Chesler and Nidra Poller, I am reminded of this New Year’s Eve. Across London fireworks entertained us but as they ignited my thoughts turned to the people of southern Israel, living in terror since it vacated Gaza. My 95-year-old friend in Ramat Gan, always fearless since she left Germany 75 years ago, rang me and expressed an uncharacteristic terror of the attacks from Hamas.

In 1985 when Philadelphia Mayor Wilson Goode bombed the houses of MOVE, a radical group he wanted eradicated, Alice Walker said that when one bomb falls it lands on all of humanity. Yes, true. But the beleaguered, hardworking people of the Jewish state founded in the ashes of Auschwitz deserve a future rid of violence and hatred, just as the Arabs of the region deserve a livelihood devoid of corruption, primitive oppression, and perpetual radicalism.