Why Tamarod Is the Most Important Story of 2013

It began in the classic grassroots fashion of anyone lobbying for change, with volunteers young and old, Muslim and Copt, veiled and flowing-haired, pounding the pavement in Egypt’s subways, squares and street corners with a stack of petitions and a few extra pens.

By the time the June 30 protest rolled around, the Tamarod (“Rebel” in Arabic) campaign started by three activists amassed 22 million petition signatures. “We had an idea of organizing a strong, popular street action against the deteriorating political and economic conditions, to reunite the revolutionaries and all the Egyptians who are fed up with Morsi,” said Mahmood Shaheen, one of those founders. They found 60 volunteers to start circulating the petitions, then “thousands wanted to join, millions wanted to sign.”

As many as 14 million people poured into the streets in the June 30 protest, a massive groundswell of humanity downgraded to hundreds of thousands by media outlets as diverse as Fox News and Al-Jazeera. Either the number of signed petitions or the top estimate of the protesters were greater than the number who originally cast ballots for Mohammed Morsi.

“If the people of Egypt are not obeyed, another regime will fall,” Tamarod promised in a message to the world shortly before the protest. People were skeptical that they could affect change. Some Egyptians signing the petitions wished Tamarod the best of luck but had doubts they could get Morsi out. A nervous Morsi sacked officials the Muslim Brotherhood suspected of acting in concert with Tamarod. Publicly, an attorney for the Brotherhood scoffed that the movement acted like they were trying to change the management of a sports club, calling the petition signatures “as worthy as void itself.”

Tamarod kept its eye on the prize, reminding Egyptians from all walks of life that the regime sold the Jan. 25, 2011, revolution to the Muslim Brotherhood and that Morsi was “no longer a president because he is a murderer.”

On July 3, as laser beams and fireworks lit up the Cairo sky, Tamarod won.

These are the moments that define history. This is the raw spirit of the Tiananmen Square protesters who inspired many of us Gen Xers to fight for human rights and democratic freedoms. It was as alive when opponents of the Muslim Brotherhood danced outside the party’s headquarters to get the Islamists’ goad as it was when smiling Coptic nuns grabbed their Egyptian flags and joined the June 30 protest.

The Muslim Brotherhood stood next to the democracy activists in 2010, gathering petitions to oust Hosni Mubarak at the beginning of 2011 so their banned ranks could gain the inside track to making this rich millennia-old civilization a state crushed under the weight of Islamic law. By 2013, Egyptians seeking real freedom were on the front lines again as theocrats turned their post-dictatorship world into another autocracy. They defied the powerful Brotherhood. They still weather attacks from Morsi supporters. Coptic Catholic Bishop Antonios Aziz Mina of Giza called weathering the Brotherhood’s attacks “the price we know we have to pay” for “Egypt to get back up on its feet again.”

Perhaps there was no story that more clearly highlighted the shame of American foreign policy. Egyptian protesters were not shy about expressing their feelings of betrayal, hoisting banners that accused President Obama of supporting terrorism in backing the Morsi government and blew up photos of Ambassador Anne Patterson smiling and laughing at a meeting with Muslim Brotherhood leader Mohammed Badie. “We know what you did last summer,” read one banner, while another said, “Anne Patterson, leave Egypt now and go to hell!!!” In a post-revolution slap to Egyptians, Patterson was removed as ambassador but promoted to assistant secretary of State overseeing Middle Eastern affairs.

“Wake up America, Obama backs up a fascist regime in Egypt,” said one banner, while another placed an international “no” symbol over Obama’s face and read, “Obama, you can’t fool your people and the world any more. You finance & back terrorism.”

It wasn’t just difficult to find U.S. news coverage of the protests until they celebrated the July 3 removal of Morsi, but there were crickets from the White House as the administration seemed irritated by the distraction from Obama’s Africa trip. When Gen. Abdel Fattah al-Sisi mobilized the military as the protector of the Egyptian people, he gave Morsi a deadline to step down before removing him — an ouster that left both overt and less-vocal Morsi supporters crowing “coup.” As the interim government has forged a new, more inclusive constitution, the Obama administration leaned on al-Sisi to include the Muslim Brotherhood. As the Egyptians branded the Muslim Brotherhood a terrorist group, the White House kept pressing its demands for inclusiveness. Luckily, as Washington suspended large-arms and cash deliveries to Egypt, Cairo has gotten high-dollar support from Gulf nations that know from experience that keeping the terrorists out reaps the benefits of drawing business investment and tourists.

Tamarod may have caused the ouster in Egypt, but across the world the movement’s actions made masks clatter to the ground as leaders’ true intentions and loyalties were no longer cloaked behind democracy-friendly rhetoric.

In 2014, the spirit of Tamarod still has more to do. It’s alive in Tunisia, where the Islamist government is under pressure from the movement, and in Libya, where it’s demanding not a new government but a stronger one more able to govern — and the expulsion of armed Islamist militias that wield considerable power in the post-Gaddhafi country. Tamarod has made Hamas nervous in the Gaza Strip, where anyone uttering the name of the rebellion movement faces threats or arrest.

Until now we’d thought of Turkey as the last great bastion of secularism in the Muslim world, a republic that had held faithful to the vision of founder Mustafa Kemal Ataturk over the decades. But it’s been a tough year for westernized Turks who have no desire to live under religious law, with Islamist Prime Minister Recep Tayyip Erdogan showing more of his colors, arresting demonstrators and cracking down on basic freedoms.

And that brings us from the story of the year to the image of the year.

After Turkish authorities cleared protesters out of Taksim Square and banned public gatherings, a lone man walked into the square, placed his backpack at his feet, and stood facing the Ataturk Cultural Center. Erdem Gündüz, a choreographer concerned about Turks’ rights, stood still for more than six hours, his hands thrust in his pockets, ignoring a few taunters and prods from confused police, staring up at the portrait of Ataturk as if to say “we’re trying.”

The silent, stoic protest spread as men and women not only joined Gündüz in the square, but at other sites of Turks’ recent struggle: at the Otel Madımak in Sivas, where a Salafist mob burned alive 33 intellectuals and artists in 1993 because one man at the cultural festival had translated Salman Rushdie’s The Satanic Verses; at the spot in Ankara where protester Ethem Sarısülük was killed in the June demonstrations; in front of the offices where newspaper editor Hrant Dink was assassinated in 2007.

Eventually Erdogan’s squads moved into Taksim and reaped condemnation for arresting protesters doing nothing but silently gazing up at Ataturk. But the demonstration spoke volumes, and reminded all that Tamarod, God willing, is just getting started.

Where will America stand? 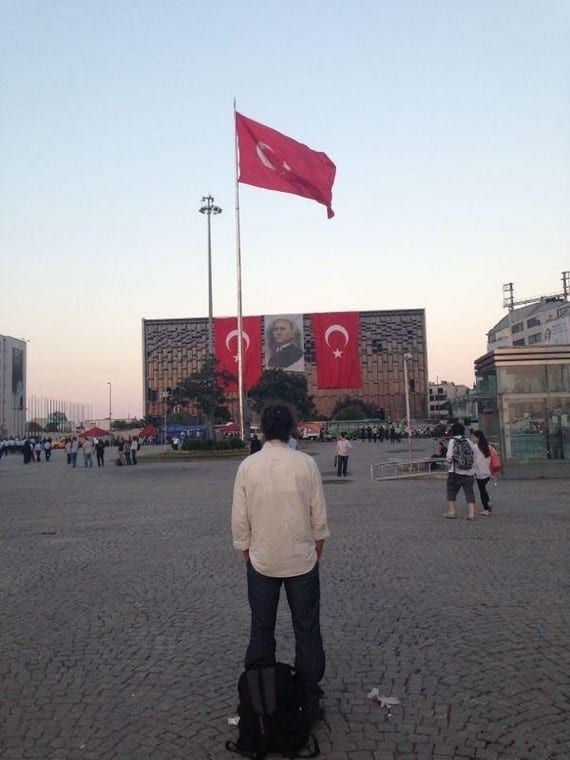 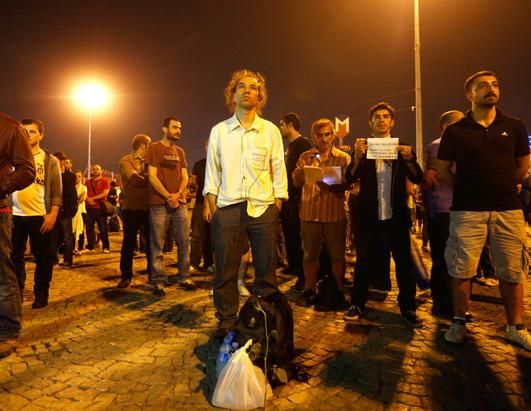