Mayor Gavin Newsom may have oh-so-sneakily maneuvered the route of the Olympic torch run Wednesday, but the phalanx of anti-China demonstrators ran the torch out of town on a rail.

Score a victory by the lefty residents of the Bay Area — and nearly every protester I spoke with was a local — over the lefty, China-butt-kissing mayor of America’s most liberal metropolis. After the Beijing torch left AT&T Park to circuitous routes unknown — as Newsom (probably scared that the Chinese ambassador would be in his office yet again on Thursday morning) changed the path at the last minute — protesters mobilized their might around the closing ceremonies, leaving a torch air-drop as the only option to reach the stage. 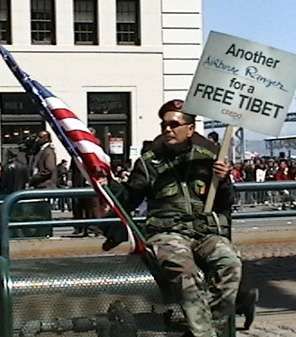 In a stark change from Tibetans’ Tuesday march to a desolate Chinese consulate, Chinese nationalists showed up en masse with giant flags and drums to shout down the supporters of Tibet, Darfur, Burma, the Uighurs (Chinese Muslims), democracy in Vietnam, and more. For once in the history of San Francisco, nobody seemed to notice the quartet of Code Pink activists, who were demonstrating against the Iraq war in their salmon-colored togas.

But it’s not like the City by the Bay completely abandoned its weirdness. One protester excitedly marching suddenly proclaimed to her friend, “We should get some weed!” One woman carried a sign reading “Another Organic Chef for Tibet.” Three naked men campaigned to bring the Olympics back to its fancy free, ancient-Grecian roots. “A big tradition in San Francisco is public nudity,” said George Davis, who said no officers had harassed the trio. Davis also acknowledged the spirit of the day coursing through the other protesters: “I’m glad that people are concerned with the problem of human rights.” 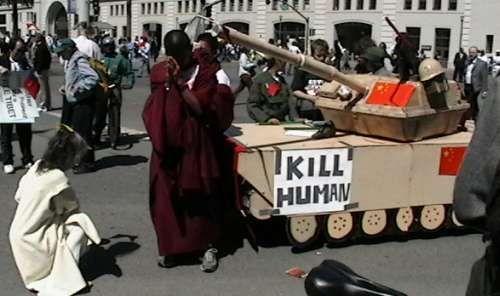 Hoang Co Dinh of San Jose, waving the old flag of South Vietnam and protesting the 1974 Chinese seizure of the Paracel Islands from Vietnam and China’s 1958 declaration of ownership of the Spratly Islands, said the protesters representing myriad causes shared a lot of common ground. “We come here for the same purpose,” he said. “China must behave like a civilized country.”

“They have to let the people talk,” he added. “Even in Vietnam we have not the right to protest.”

Scuffles broke out here and there between those who thought China was golden and those who saw, well, reality; one Chinese man shouted “Dalai Lama is stupid!” repeatedly through a bullhorn. Police officers seemed to pretty much stay out of the fray, more concerned with protecting the would-be finish line for the torch. On the ground beneath one set of protesters were three fire extinguishers assembled in a neat triangle, ready to go for the gold. 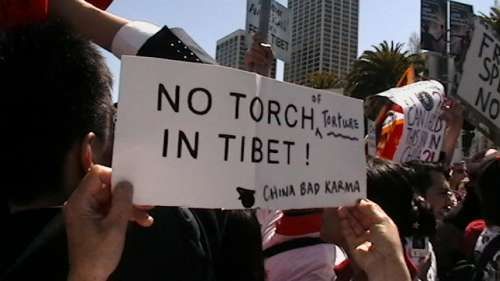 As most of the Chinese residents stayed behind barriers, waiting for the torch that never came, Tibet supporters spilled into the Embarcadero with little protest from cops. One demonstrator posed as a Buddhist monk — the words “Free Tibet” taped over his mouth — walking along in prayer, while another man wielding a Chinese flag walked behind him and flogged him with a leather strap. For the number of verbal altercations between the pro- and anti-China demonstrators there was a low level of physical contact, even when Chinese wielding giant PRC flags strode into the middle of protest groups.

When the time neared for the closing ceremonies of the torch run, Tibetan organizers told protesters to go through the Embarcadero Center building to get around police barricades branching far from the stage setup. “Block all the entrances!” a protest leader shouted. “Do not let the torch enter the closing ceremony!” Demonstrators streamed through the doors of the shopping center, chanting slogans as shopkeepers peered from windows.

Once near the stage, protesters pressed against the inner barricades from all sides as a giant screen flashed photos of Olympics past to inspirational instrumental music. A few encouraged me to lead the protest charge to knock down the barricades, thinking that the press pass hanging from my neck gave me free rein to do so. After an hour or so, the ceremonies were called off and the torch was shuttled over to San Francisco International Airport.

The protests underscored the support that world leaders have to make the wise decision to boycott the Olympic opening – something apparently not considered by President Bush. In an interview to be aired Friday, he told EWTN Global Catholic Network, “I’m going to the Olympics, for starters. And I’ve — my plans aren’t — haven’t changed. … I don’t need the Olympics to express my position to the Chinese leadership on freedom.”

But the world does need leaders who, unlike Newsom, decide to follow the lead of German Chancellor Angela Merkel and put human rights first.

Crushed in the middle of protesters at the ceremony site, I saw a Tibetan woman standing in front of me curiously pick up a paper on the ground, which turned out to be the cover of a Chinese promotional publication of some sort. She slowly ripped up the paper and let the pieces fall back to the ground.

After seeing Americans from all walks of life come out to protest China, Bush should likewise tear up his Olympic invitation.

Bridget Johnson is a columnist at the Los Angeles Daily News.