Felons Can't Own Guns. So How Did This Guy Acquire Three ... Gun Companies?

UPDATE (11/5/10): Please see correction and clarification regarding this article.

In the dark fantasies of comic books, villains with pathological intent maniacally plot to build super-weapons to decimate cities, countries, and even planets. In Hollywood movies, the corrupt and evil plot to build cop-killing firearms to bring anarchy and chaos to our streets.

Now imagine, if you can, a convicted kidnapper — with additional arrests for communicating threats and simple assault — acquiring not just a weapon or two, but an entire gun company while the federal government stood idly by.

Imagine that this same felon then started another gun company from scratch, and then used that company to acquire a third company that was licensed to build machine guns. Imagine further he was given a concealed carry license, and that local law enforcement and federal agents turned a blind eye to everything.

This isn’t the latest reboot of RoboCop or Lethal Weapon, but the extraordinary alleged real-life story of Lee Franklin Booth, 51, a Greensboro, North Carolina, resident with an incredibly checkered past. 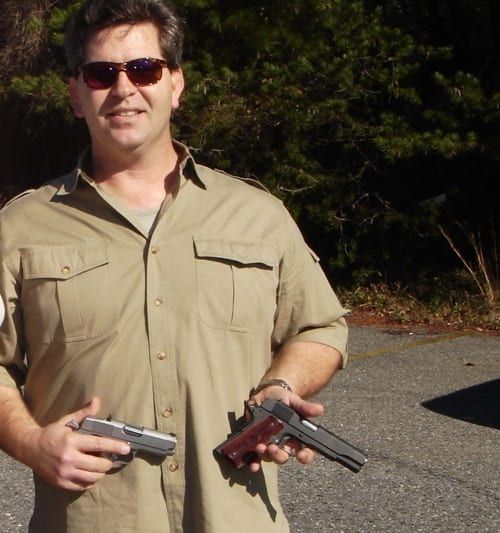 This pic alone could get him 10 years for each gun.

According to the North Carolina Department of Correction Offender Public Information web site, Booth was convicted of second-degree kidnapping on September 24, 1981, and was imprisoned from that date until his early release on December 30, 1985.

In the quarter-century since his release from prison, Booth has been a very busy man.

Many of those who have crossed paths with him refer to Booth as a con man. He is perhaps best-known for his role in the downfall of Pace Airlines. Pace was once known as Hooters Air, the ill-conceived project of the Hooters restaurant mogul Bob Brooks. William Rogers, Sr. bought the airline and mismanaged it, and has been charged in a criminal case for his role in the collapse of the airline which cost 423 employees their jobs. Rogers and Booth, who all but forced Rogers out of the company at the end, are the target of an on-going bankruptcy case that alleges breaches in their “fiduciary duties” as the top officials of the company.

But the most damning — and extraordinary — actions of Mr. Booth aren’t his dealings with Pace or his kidnapping conviction (or how he became a company officer in any company in a day and age where a simple background check would disclose his criminal background). Instead, they are his stunning acquisitions of a trio of gun companies. Just as stunning  is the federal government’s incompetence or corruption that allowed such a glaring failure of public safety to occur.

“Detonics” has a long and storied history as a firearms brand, emerging decades ago as the innovator of the compact 1911 .45 ACP handgun. The company originated in Seattle in the late 1970s, and thrived until insurance costs began to escalate in the 1980s. Instead of terminating the brand, the Detonics founders elected to license the company’s intellectual property and to allow third parties to continue manufacturing and selling the gun.

In 2004, Detonics USA (owned by George Skipper) was a licensee manufacturing Detonics firearms. In the spring of 2007, under apparently fraudulent conditions, Lee Booth acquired Detonics from Skipper.

Booth fashioned himself the CEO, secretary, and CFO of Detonics USA Industries. Booth allegedly took delivery of “500 weapons and thousands of gun parts” as part of the deal, and then liquidated the company of assets and failed to pay the employees. Skipper took Booth to court, and reacquired control of the company in the summer of 2007.

The moment Booth took possession of those weapons and parts, he should have immediately been subject to arrest for violating 18 U.S.C. 922(g) which prohibits “anyone ever convicted of any felony to ever possess any firearm either inside or outside of his home.” For reasons still unknown, law enforcement has never acted against Booth, even though Booth has allegedly failed a Georgia court’s order to return Detonics USA gun parts assets.

After being forced to give up Detonics USA, Lee Booth started another gun company — Victory Arms. The company web site claims that they build “the finest 1911 handguns and AR style rifles available today.” Booth’s involvement in Victory would seem to be another automatic violation of U.S.C. 922(g) against felons owning firearms. Sources claim that in creating the company, Booth filed for a Federal Firearms License (FFL) for Victory under his own name. Denied the FFL (which, again, should have resulted in his arrest), Victory once again filed for an FFL under the name of a Victory employee, and was successful.

This is a baffling case of either corruption or sheer incompetence, as by this time federal authorities knew that Booth was a principal in the company.

In August of 2009, Booth made his third and most alarming acquisition, bringing Bob Reynolds of Templar Consulting under the Victory brand.

Templar/Reynolds is licensed by the ATF to build weapons heavily regulated by the National Firearms Act of 1934 (NFA), including selective-fire weapons and machine guns. Booth allegedly ran Templar into the ground, as he did Pace Airlines, and Reynolds was forced to restructure Templar Consulting through a Chapter 11 bankruptcy. Victory Arms allegedly still possesses (or possessed) Templar property awarded to the company by the bankruptcy court, including: 3000 rounds of 5.56 ammunition, around 24 handguards, 148 bolts, cam pins, and 300 trigger control pins. Possessing these parts, in actuality or on paper, should presumably put Booth in prison for a very long time.

But authorities have allegedly turned a blind eye to Booth’s activities, time and again.

Investigations conducted by those interested have been far more competent.

An investigator has alleged that Lee Booth acquired a North Carolina concealed handgun permit within the past decade in Guilford County, apparently in direct violation of North Carolina state law. Booth allegedly surrendered the permit to the Guilford County Sheriff’s Department once it was revealed he had a criminal record, and the department allegedly let the investigation drop in order to avoid the embarrassment of explaining how they issued a permit to a felon in the first place. If true, this places the department and Booth in violation of numerous laws. The same investigator also alleges that the ATF’s Atlanta office knew he was a felon as a result of the Detonics USA acquisition in 2007, but no prosecution was pursued.

Likewise, Templar’s Chapter 11 court case and filings show that Booth’s company, Victory Arms, claimed ownership of gun parts and firearms belonging to Templar Consulting — including parts regulated by the National Firearms Act and Gun Control Act of 1968 — and had possession of these parts as well. This was evidence presented in a federal court that shaped the court’s ruling. ATF auditors were told on two occasions that Victory/Booth had controlled parts, and was reminded that Booth was a convicted felon. ATF again chose not to intervene.

After the Templar/Victory split, it is suspected that the FFL acquired by Victory was revoked, but no criminal charges have apparently been filed. We also know that the ATF was notified that Booth/Victory had illegally taken possession of AR-15 style rifles and parts from Reynolds, which was confirmed by the ATF’s own audit of Reynolds’ books (Reynolds did not know of Booth’s conviction until after their split, and maintains his FFL and rights to manufacturer custom firearms).

We have stumbled across one possible reason why the ATF may have refused to act.

According to an eyewitness, an IRS agent was frequently a guest of Booth’s at Victory Arms. It seems rather odd that a federal agent would frequent an establishment run by a convicted felon. As federal agencies in smaller localities such as Greensboro often share office space and close relationships with other agencies, it isn’t absurd to wonder if the agent’s alleged friendship with Booth and chummy relationship with other federal agencies became a factor in the local ATF’s refusal to act.

If all or even most of the allegations made by various sources are true, Lee Franklin Booth should be behind bars.  If these allegations are accurate, Booth is guilty of possessing hundreds of firearms, operating three firearms companies that each had firearms inventory, and receiving a CCW permit.

A U.S. Department of Justice investigation should be launched to investigate the possibility that multiple law enforcement agencies allowed a felon to run free after attempting to build a gun manufacturing empire.

This couldn’t be the plot of a bad Hollywood movie. It simply isn’t believable theater. Unfortunately, it is real life, and those agencies responsible have a hell of a lot of accounting to do for their failures.