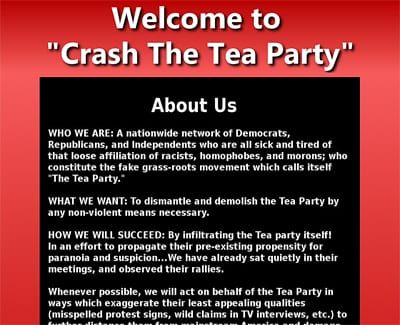 If there has been one constant in our national politics of the last year, it has been the continuous assault by progressives and liberals against the grassroots tea party movement. As the tea party movement has gained support and become more effective, the attacks have ramped up. After attempts to ignore the movement failed, progressive astroturfing specialists attempted to create a countering Coffee Party movement that quickly fizzled out. When that tactic failed, the left-leaning op-ed pages went into direct attack mode and only served to further distance themselves from mainstream America.

Out of momentum, out of sorts, and out of ideas, progressives were left with one alternative: framing tea party activists as a group of unpalatable racists and bigots that any reasonable person would shy away from.

Such is the mission of www.crashtheteaparty.org, a newly incorporated website seemingly dedicated to widespread and organized fraud to discredit the tea party movement, as it boasts on its home page:

WHO WE ARE: A nationwide network of Democrats, Republicans, and Independents who are all sick and tired of that loose affiliation of racists, homophobes, and morons; who constitute the fake grass-roots movement which calls itself “The Tea Party.”

WHAT WE WANT: To dismantle and demolish the Tea Party by any non-violent means necessary.

HOW WE WILL SUCCEED: By infiltrating the Tea party itself! In an effort to propagate their pre-existing propensity for paranoia and suspicion. … We have already sat quietly in their meetings and observed their rallies.

Whenever possible, we will act on behalf of the Tea Party in ways which exaggerate their least appealing qualities (misspelled protest signs, wild claims in TV interviews, etc.) to further distance them from mainstream America and damage the public’s opinion of them. We will also use the inside information that we have gained in order to disrupt and derail their plans

As you may suspect, crashtheteaparty.org was not created by a Republican or an independent, but instead by someone with a red-tinted sickle to grind. In this instance, the suspect appears to be a conspiratorial 36-year-old from the Pacific Northwest named Jason Levin. He started promoting the site on April 8 on his personal Twitter account, but failed to do an adequate job of covering up his personal information when he registered the domain five days earlier. He later attempted to cover his tracks, but the original information was quickly disseminated around the internet by those who wondered who was behind the group.

When contacted by Pajamas Media, Levin confirmed his involvement in the effort, stating, “Our stated intentions, or ‘manifesto’ as some of the conservative bloggers have called it is absolutely sincere.” He claimed to have operatives in tea party groups in every major city.

Levin concluded with a taunt: “Good luck stopping us. See you on 4/15.”

He is a middle school technology teacher who isn’t impressed by his students or his current job. He promotes a Firefighters for 911 truth site, which establishes his own conspiratorial bona fides as a truther. He indulges in his dislike of Republicans in general and in Sarah Palin and Glenn Beck in particular. Predictably, he doesn’t like Fox News. Other tweets on Mr. Levin’s page indicate that he is pro-ObamaCare and loves Keith Olbermann. Interestingly enough, he claims to not be a Democrat — presumably, his views are further to the left.

On the crashtheteaparty.org site there are both Facebook and Twitter accounts that have been created for the group, both apparently created after Levin registered the domain name. The oldest post on the Facebook account dates back to Friday (April 9), while the Twitter account started promoting the site on Wednesday (April 7). The most recent activity on the official Twitter account notes that the site is getting media and online attention, while Levin gloats on his personal site that his creation has “gone viral.”

Smears and deception have been part of politics from the beginning, but the proud, brazen nature of those who embrace this sort of activity is a direct affront to the sort of civic involvement we need to have in a healthy republic. These are vile tactics by any moral standard, championed by individuals and groups that care not for debate and dissent, but instead thrive on creating a climate of mistrust and fear. Perhaps this is the kind of world they desire to live in, providing they have the power in that world.

One has to question the character of individuals involved in such an effort, and their trustworthiness in any endeavor. They create stereotypes and perpetuate them for media consumption in order to demonize and alienate their fellow Americans from one another. And to what end?

The crashtheteaparty.org website exists for one reason and one reason only: to stifle the voices of those with whom they disagree and to render mute a rising chorus of dissatisfaction with a government that is acting in ways that deeply distress a growing majority. It is a censorship plot. It is an attempt to stoke anger and distrust, and it is as insidious and distasteful to the hearts of free men as any book-burning or pogrom.

We can only hope that the exposure of this group to the broader American population will expose their dirty tricks before they discredit a movement seeking only a return to those values we hold most dear and in common with this nation’s founders. In other words, crashtheteaparty.org is the worst kind of gutter politics, promoted and practiced by those who provide only subversion where leadership is needed.

As for Jason Levin and his co-conspirators, I wish them the best of luck in finding careers they are more satisfied with — preferably, careers far away from impressionable children.

Update: If you have videos or photos of Tea Party crashers, we’d like to know about it; report them here.