I’m a 77-year-old conservative grandmother living, for family reasons, in a very blue state. It’s only March and already the Obama 2012 bumper stickers are everywhere. The parking lots are filled with them.  They’re irksome, especially when combined on the same bumper, with the 2008 version. It appears that the driver has learned exactly nothing in the past four years.

Is there anything I can do that will avoid direct confrontation, won’t get me in trouble with the law, but that will satisfy my urge to communicate my disagreement with the Obama-supporting owners of these cars?

What you may do that’s perfectly legal is what many pizza chains and other businesses do in parking lots: gently lift the windshield wiper and place a written message to the driver where he or she cannot avoid seeing it.

I have three suggestions:

A POLITE PIECE OF YOUR MIND

You type two sentences and print out as many as you like. Keep them in your car at all times. Here’s a little inspiration:

Some unknown socialist put an Obama bumper sticker on your car. I’m letting you know so that you can remove it before it causes you any further embarrassment.

That’s it.  Simple, friendly, concerned, considerate. What’s not to like?

Happily, your choices are many and, while not inexpensive, if some of your like-minded friends chip in, it might be worthwhile to spend some money for such upbeat messages as:

The bumper stickers come in packs of 50 for $190 ($3.80 each), or bought singly cost $5 each. If you were to park your (un-bumper-stickered) car and watch what the pro-Obama drivers do after noticing your kind gift, my prediction is that you’d observe them throwing your valuable bumper sticker on the ground. Littering! As soon as they drive away, retrieve your abandoned bumper sticker and place it on the windshield of the next pro-Obama car you see.

After all, an anti-Obama bumper sticker is a terrible thing to waste.

Given your age and desire to avoid direct confrontation, I’d recommend being as subtle as possible as you go about your activities.  Perhaps you have a big, strong young male family member or friend who feels as strongly about Obama as you do who’d like to spend some quality time with you.

If you’d like to spend less than the prices noted above, I suggest the following third option:

A BIGGER PIECE OF YOUR MIND

In the immortal words of New Orleans chef, restaurateur, and entrepreneur Emeril Lagasse, a letter such as the one below is guaranteed to kick it up a notch. A note of caution: the first option takes only a few seconds to read.  The one below will do more to express your thoughts, but it runs the risk of not being read in entirety by an avowed Obamaphile. That said, here’s an example of how you could purvey a generous piece of your mind.

I note with stunned incredulity that the rear bumper of your vehicle is festooned with both an Obama 2008 and an Obama 2012 one.  This is troubling indeed.  It suggests to your fellow citizens that you’ve spent the last three years in the sort of place Vice President Cheney was said to have inhabited during the George W. Bush years: a secure, undisclosed location — but unlike Mr. Cheney, however, without access to news from the outside world.

If, on the other hand, you’ve been living openly and freely, I must inquire whether you’ve noticed the lack of respect for the U.S. Constitution by the president and the Department of Justice, with “Attorney General” Eric Holder’s refusal to prosecute such blatant law-breakers as the New Black Panther Party and ACORN?  Does the phrase “Fast and Furious” mean nothing to you?

Have you noted without dismay the president’s hare-brained, anti-capitalist and un-American belief that those who work hard and have actually dared to earn a handsome income be penalized and have their hard-won wealth “re-distributed” to others?

Have you not watched in horror as the unemployment rate has soared perilously close to 9% among your fellow citizens?

Are you not outraged by every single element of ObamaCare and the fact that a growing number of physicians in fields such as cardiology are considering becoming “life coaches” to their patients because the tests they routinely order to monitor their health will be over-ridden by computerized regulations, and, indeed, forbidden entirely by green eye-shaded federal government employees who’ve never seen the inside of a medical school classroom? Or by social engineers or clueless politicians such as Kathleen Sebelius, secretary of Health and “Human Services”?

Are you not horrified that your country is now more than $14 trillion in debt?  Does this not concern you if you have children or grandchildren, or even if you don’t?

Can you honestly say that none of these outrages causes you to reconsider your original, ill-founded enthusiasm for Barack Obama?

If you’re as pro-Obama in 2012 as you were in 2008, you can be only one of two things: (1) a Democratic loyalist who gives not a moment’s thought to the actual positions and hazardous consequences of voting like a lemming, or (2) a blinkered, clueless cave-dweller cut off from all news of the United States and the world for the past four years.  If that’s the case, I urge you to read news analysis on PJM.com during that period to see exactly what you’ve missed.

Just how much drek can you allow yourself to ignore?

Finally, I suggest you buy yourself a giant sized GOO GONE, a liquid that comes in a spray can.  Apply it to your bumper stickers. Scrape with all your might until you’ve succeeded in removing that embarrassing pair from your rear bumper.  Once they’re gone, you can drive with your head held high because, at long last, you’ll have come face to face with the harsh, cold breath of reality and will have understood the perilous error of your ways.

There you have them: three distinct approaches, any one of which should help cope with some of the frustration you feel, and may even shed a little light of reality on your state’s Obama-besotted residents.

When the unremitting uniformity of their political views gets you down, return to this webpage and feast your eyes on the artistic creations below, brought to you by our distinguished colleagues at MAD magazine, one of the most reliably great magazines of the 20th and 21st centuries, the obvious fountainhead of The Onion: 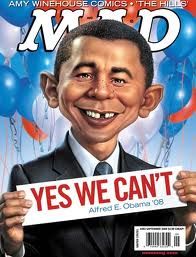 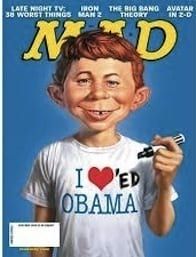 Send your questions about personal, political or any other matters to Belladonna Rogers at [email protected]. All correspondence with her is confidential, and all names, locations, places of employment and ages of the parties will be changed to protect the privacy of the readers who write to contribute questions.