The Elephant in the Room: A Review of Dr. Helen Smith’s Revelatory New Book, Men on Strike 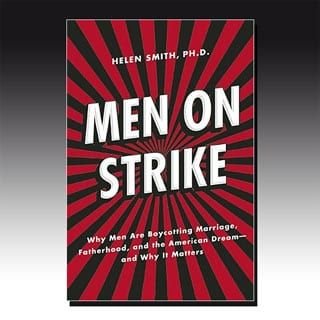 Jimmy Durante, the classic comedian and singer, used to nonchalantly lead a live elephant onto the Broadway stage during the course of his show.  A police officer would accost him, asking:  “What are you doing with that elephant?”

Durante would casually reply: “What elephant?”

The flip response always brought down the house.

As Dr. Helen Smith lays clear in this dramatic and revelatory new book, the status of men in modern American society is the new elephant in the room: obvious, of major importance, yet often almost deliberately ignored, discounted, or downplayed.

Dr. Smith is a forensic psychologist with a doctorate from the University of Tennessee, and a columnist at PJ Media.com. Her previous book, The Scarred Heart: Understanding and Identifying Kids Who Kill, showed her brave ability to both empathize with and look dispassionately at dangerous children.  Smith’s professional experience with disturbed children gives her an unusually insightful perspective on men’s issues.  As she describes, the unfair treatment of men by society has unfortunate and deep-rooted trickle-down effects on children.

In Men on Strike, Dr. Smith takes us on a highly readable journey through her extensive studies of men’s issues.  We learn, for example, of the impact of men’s increasing fears of being labeled a pedophile.  In one unfortunate case, Englishman Clive Peachey saw two-year-old Abigail Rae wandering freely as he passed by in his truck.  But he didn’t stop to help her for fear he would be accused of attempting to abduct her.  The result?  Abigail drowned.

We learn of 28-year-old Fitzroy Barnaby, who, upset at a 14-year-old girl who had stepped directly in front of his moving car, swerved, emerged from his vehicle, and grabbed the girl by her arm as he remonstrated with her for her nearly fatal folly.  For that minor incident, which would have been ignored if Barnaby had been female, Barnaby was subjected to years of legal proceedings which culminated in him being designated a sexual offender.

Smith’s critically important book lays clear the pernicious outcomes of a climate that so idealizes female victims that it is willing to pay virtually any price to ensure those victims know their place — and their power.  As my own work on studying pathological altruism and altruism bias has shown, it is all too easy to draw well-meaning society members into such ultimately harmful social movements.

Dr. Smith also sensitively describes the inhospitable climate on college campuses towards men.  As a college professor, I can vouch for the deeply troubling atmosphere — I’ve attended dozens of luncheons over the years celebrating women’s victimization with litanies of misleading and downright false “facts” and one-sided perspectives that resemble nothing so much as an old-fashioned revival meeting.  (God forbid anyone ever stand upright to object to the misinformation being conveyed.) As Dr. Smith observes, women already approach 60% of the population of most campuses.  If the percentages of men and women were reversed, we would have a national uproar.

I was once invited to speak to a class of feminists about life as a female engineering professor.  I looked at these bright, intelligent young women and couldn’t resist.  “What the hell are you doing in here studying feminist theory?” I asked.  “Why aren’t you over in the School of Engineering, studying with me and getting yourself out of victimization by getting a fascinating, empowering, and high paying job as engineer?  My generation of women’s rights activists fought for you to have that opportunity, and you’re acting as if we’d done nothing.”  The students sat staring at me, open-mouthed.

One of the best aspects of Dr. Smith’s invaluable book is that she doesn’t simply describe the atmosphere that has developed from well-meaning attempts to engineer social solutions to perceived victims — she provides concrete steps men and women alike can take to start steering society’s ship back to calm and reasoned waters.  One simple step is to just stop laughing when men are unfairly maligned.  If men participate in the maligning of other men (Smith calls them “Uncle Tims”), say something.  If an advertisement maligns men, write to the advertiser — as always, money talks.  Start vocal men’s rights groups at universities.  If you are a parent of a university student, demand answers from administrators regarding policies that discriminate against men.  As Dr. Smith notes, such policies are on the insidious rise, and the excellent organization FIRE is doing much to help begin countering them.  The advice offered in Men on Strike goes much further — it is thoughtful, pragmatic, and useful.

Once, while I was teaching engineering electromagnetics, a student accidentally called me “Mrs. Oakley.” He instantly corrected it to “Dr. Oakley,” apologizing profusely.  “That’s okay,” I said, “I’m very proud to be Mrs. Oakley.”  The student was stunned, later telling me privately that was one of the first positives he’d ever heard from a female college professor about husband and marriage.

Read this extraordinary book so that Dr. Helen Smith can, with her insightful perspectives, reveal to you the elephant in the room — the first step towards setting society back in balance.  As Dr. Smith notes, quoting Martin Luther King Jr., “Injustice anywhere is a threat to justice everywhere.”

Barbara is a Fellow of the American Institute of Medical and Biological Engineers and a recent vice president of the IEEE Engineering in Medicine and Biology Society. Currently an Associate Professor of Engineering at Oakland University in Michigan, she has been at the forefront of efforts to expand the bioengineering profession and has won awards from such organizations as the National Science Foundation. Oakley’s work has appeared in publications ranging from The New York Times to the IEEE Transactions on Nanobioscience. Her Website is at Barbara Oakley.com.
Read more by Barbara Oakley