Will Indiana Save Hillary?

The collegians and twenty-something volunteers who sit in Barack Obama’s downtown Indianapolis headquarters wear “We finally matter” t-shirts, noting that the “Obama Youth” will speak loudly in the Hoosier State on May 6. But all six million citizens of Indiana — at least Democrats — should lay claim to that slogan, since Indiana, often too late in the electoral season to affect the nomination, will matter. 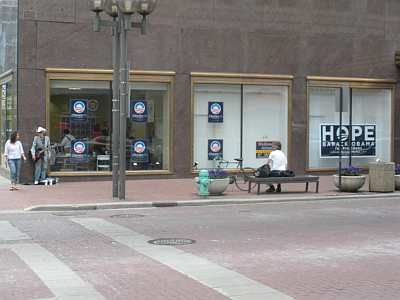 Like the colors of the state’s largest university, Indiana is a Red State. Hoosiers have supported the Republican nominee for president ten consecutive times and in 16 of the past 17 General Elections going back to FDR’s re-election bid in 1936. And despite three congressional seats flipping to the Democrats in 2006, John McCain seems an agreeable enough candidate to avoid Indiana going blue this November.

Unlike its more left-leaning neighbors in the Upper Midwest, Indiana has fewer large cities, more patriotic farmers, perspicacious veterans, and America’s 15th most populous state actually has our fourth largest National Guard, which has been very active in the Global War on Terror. That considered, no more than 40% of Hoosiers are registered Democrats, so don’t expect any more than two million folks to turnout on May 6. However, Indiana’s Democrats are deeply divided based upon socio-economic level, age, race, priorities, and their locale in this culturally diverse state that borders Michigan on one end and Kentucky on the other. None other than the always truculent James Carville, architect of Bill Clinton’s 1992 campaign and a Hillary backer, told Larry King last week that “Indiana is the tiebreaker.”

Thus, with indications that Obama will likely triumph that same day in North Carolina, will the Hoosier State indeed be “Clinton’s Last Stand,” as it essentially was for Tecumseh’s confederacy at the Battle of Tippecanoe nearly 200 years ago? Or will “The Comeback Kid” be able to push on and move south into winnable states like Kentucky and West Virginia in the coming weeks after another victory?

Where Hillary should do well: To the common observer, it has become evident that the former First Lady is winning here, as she has elsewhere, amongst the elderly, women, Catholics, Latinos, and especially the middle-class union households in Indiana’s northern industrial cities that Mr. Obama has found elusive recently. Trade and Labor Unions are powerful in Indiana, and have rallied around Hillary, essentially declaring her to be more genuine and less pedantic than Obama.

She has spoken to large audiences in those “bitter” blue-collar cities that have seen jobs disappear like Terre Haute, South Bend, Kokomo, Marion and Gary. Events in “forgotten towns” like Anderson, where historic factories and plants have truly vanished overnight, have been raucous for Clinton. I spoke with a school teacher from tiny Clinton (Indiana) as we observed Hillary’s speech at the National Headquarters of the American Legion last week, and she concurred. “I’m a moderate Democrat who loves this country and just wants to put food on the table for my children. Obama is out of touch with us folks. Hillary is not perfect, but I think she certainly understands better.”

Senator Clinton has the steadfast support of Indiana Democrat Senator Evan Bayh, who also served as Governor from 1989-1997. Bayh was hailed as a “fiscal conservative” by the Wall Street Journal in 1992, when Indiana experienced a recrudescence in economic growth. Very popular across party lines in this state, Bayh has been touring the state with Clinton the past few weeks, is seen by some as a potential running mate, and castigated Senator Obama’s “bitter cling” comments in mid-April. On Friday, the Indianapolis Star endorsed Clinton. Hard to tell how much that will aid her cause…but it won’t hurt.All in all, Hillary has done well in states like Indiana, and she has positioned herself as the more Centrist Democrat in a Republican state with few radicals. Dozens upon dozens of Independents, conservatives and Republicans with whom I have chatted recently, may also cross lines, re-register, etc, in order to vote for Mrs. Clinton and impede an Obama triumph, as many did in Pennsylvania. The Illinois Senator has offended many moderates here as well. As one man put it to me the other day, “He {Obama} is the most unqualified and divisive candidate in US history, and an insult to the Democratic Party of Truman, FDR and JFK.”

Where Obama should do well: If current trends continue, Senator Obama will succeed within the same demographics he has all season: urban areas, their most affluent suburbs and college towns — places where his elitism and media foibles are ignored by so-called Latte Liberals. Indiana has fewer of those areas than many states, but they’re still in play.

Obama will undoubtedly be hurt here by some of the condescending remarks about religious folks, gun owners and other small towners who suffer in this economy — as well as his questionable associations — but he is still immensely popular elsewhere, such as downtown Indianapolis, where I reside. He has the support of interim Democrat Congressman, Andre Carson, a practicing Muslim, who is also black, and represents the urban and 30% black 7th District. In fact, he will be holding a major rally the day before the primary on the steps of the Indiana War Memorial. More than 20,000 are expected to turn out. 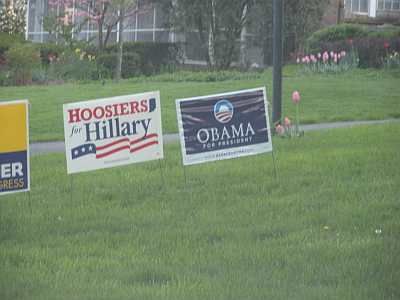 The twee suburbs and million dollar historic homes just north of Indy are littered in Obama signs, easily four-fold over Hillary. Obama also has “sealed the deal” with many collegians in Bloomington, home to Indiana University. IU is long known as a bastion of radicalism, and sometimes deemed a Berkeley of the Midwest.

On the second of April, just hours before President Bill Clinton spoke at 18,000 seat Assembly Hall, Obama’s campaign office surreptitiously announced they were giving away free tickets. to the Dave Matthews Band, who was to play a concert there three days later on behalf of the Senator. Thousands of students rapidly departed, endorsing Obama due to the gesture, and leaving the former president with a paltry 6,500 spectators. (Hillary returned to speak in Bloomington on April 25.)

That superficial yet clever act won over many a voter, as Obama has done in other college towns such as Muncie and Lafayette. Indiana’s other two large cities — Evansville and Fort Wayne — also lean toward the Illinois Senator. The northwestern corner of Indiana, a heavily-populated area known as “The Region,” could also lean Obama’s way due to its proximity to Chicago and its roughly 25% African-American populace.

One big local name to come out in support of Barack Obama here is former Indiana Congressman and 9-11 “Study Group” Vice-Chair, Lee Hamilton. On April 2, the 77 year-old Hamilton uttered the usual platitudes:

“Barack Obama has the best opportunity to create a new sense of national unity and to transcend divisions within this country, not by ignoring them or smoothing them over, but by working together with candor and civility to meet our challenges.”

But ten days later, Hamilton said he disagreed with Obama’s calls for a timetable to leave Iraq.

It’s impulsive views like these that Obama must avoid to assuage legitimate concerns of scrutinizing Hoosier voters. “Hope” and “Change” and other empty rhetoric will seemingly not work as easily here as in other states. I have regularly heard colleagues and others tell me bluntly, “I’m not looking for a savior or a rock star; I’m looking for a president.”

The latest polls are mixed as of now; some show Hillary up by a point or two, while other place Obama atop. But Mr. Obama has struggled to win support from the kinds of heartland voters that could be critical to a Democratic victory in the fall.

Either way, it will be the most exciting primary election week in Indiana since Bobby Kennedy won here in May 1968.

Ari Kaufman currently resides in Indianapolis where he is a military historian for the State of Indiana’s War Memorials and an Associate Fellow at the Sagamore Institute. A former Los Angeles schoolteacher, he is the author of Reclamation: Saving our schools starts from within.

A.J. Kaufman taught school and served as a military historian before beginning his journalism career. His work has appeared in numerous national print and digital outlets since 2005. The author of three books, he also contributes to Alpha News, Israel National News, The Lid, Business Central Magazine, and is a semi-frequent guest on KNSI Radio, KTRH Radio, and The Ed Morrissey Show. A.J. and his wife currently reside along the Upper Mississippi River.
Read more by A.J. Kaufman