On September 10, an article written by Seth Borenstein of the Associated Press trumpeted a claim of good news with the headline: “Scientists say the ozone layer is recovering.” The basis for Borenstein’s headline is a statistical analysis:

For the first time in 35 years, scientists were able to confirm a statistically significant and sustained increase in stratospheric ozone, which shields the planet from solar radiation that causes skin cancer, crop damage and other problems.

From 2000 to 2013, ozone levels climbed 4 percent in the key mid-northern latitudes at about 30 miles up, said NASA scientist Paul A. Newman.

Later in the article, Borenstein cites this news as “one of the great success stories of international collective action in addressing a global environmental change phenomenon.”

Like many superficial claims made in the mainstream media, this one reveals a different story if you scratch ever so slightly below the surface. First, a bit of background on ozone depletion: ozone reduction in the upper atmosphere is said to be caused by a chemical interaction with the inert refrigerant chemical known as “chlorofluorocarbons,” or CFCs, which is found in the piping of millions of refrigerators and air conditioners worldwide. The loss of the ozone layer in the upper atmosphere will lead to normally reflected high-energy ultraviolet light reaching the Earth’s surface, causing more sunburns and skin cancer, disruption of ecosystems such as marine plankton and algae, and other photosynthetic biomass, with a large ripple effect.

The solution was to ban certain CFCs that were said to cause a loss of upper atmospheric ozone. Borenstein’s supposed “success story” hinges on a 1987 UN resolution called the Montreal Protocol:

The Montreal Protocol on Substances that Deplete the Ozone Layer was designed to reduce the production and consumption of ozone depleting substances in order to reduce their abundance in the atmosphere, and thereby protect the earth’s fragile ozone Layer. (Source)

The Montreal Protocol certainly seems rooted with good intentions. Yet, as with so many other things we see from the UN, the actual implementation — once the cocktail parties, the speeches, and the self-congratulatory claims are over — doesn’t quite fit the original intent or the claims of success. Just a few months ago on Dec 11, 2013, NASA issued a press release containing this statement:

More than 20 years after the Montreal Protocol agreement limited human emissions of ozone-depleting substances, satellites have monitored the area of the annual ozone hole and watched it essentially stabilize, ceasing to grow substantially larger. However, two new studies show that signs of recovery are not yet present, and that temperature and winds are still driving any annual changes in ozone hole size.

“We are still in the period where small changes in chlorine do not affect the area of the ozone hole, which is why it’s too soon to say the ozone hole is recovering,” Strahan said. “We’re going into a period of large variability and there will be bumps in the road before we can identify a clear recovery.” (Source)

Within the span of nine months, NASA issued statements claiming of atmospheric ozone that “signs of recovery are not yet present,” there is “large variability,” it is “stabilizing,” and now, that the hole is “shrinking.”

So which is it? The answer may lie in the relevant political science, not the atmospheric. The Montreal Protocol is 25 years old this year, having been entered into force in 1989. When such milestones are reached, there is always pressure to make some statement that the work of the UN actually made some sort of difference.

Importantly, neither China nor India was willing to or required to participate in the Montreal Protocol. That left them free to do whatever they wanted, and that is exactly what they did. In February 1989, the New Scientist reported that China had a plan in place to boost their production of CFCs up to 10 times the present level. And, it wasn’t until the summer of 2007 that China actually got around to banning the production of ozone-depleting CFCs. So there has not been much in the way of reduction from China. In fact, as reported by Walter Russell Mead in The American Interest, China used the UN-sponsored Kyoto Protocol to run an emission credits scam operation:

By using incinerators to cleanly burn off the chemical, HFC-23, these manufacturers were earning emission credits that they would in turn sell to developed world companies in order to help them hit their targets under the Kyoto Protocol.

This chicanery didn’t go unnoticed, however: the European Emissions Trading Scheme banned trade in those credits in May, and other working climate exchanges have said they’re going to follow suit. A very lucrative business for Chinese manufacturers is drying up very quickly, and they’re not taking it sitting down.

The EIA said an undercover investigation had shown that most of China’s non-CDM facilities were emitting HFC-23 already.“If all of these facilities [under the CDM] join China’s non-CDM and vent their HFC-23, they will set off a climate bomb emitting more than 2bn tonnes of CO2 equivalent emissions by 2020,” it said.

Thanks to financial incentives to destroy CFCs under the Kyoto Protocol, there are even more CFCs in existence than there were before. This might explain why, more than 15 years after the Montreal Protocol was put into effect by the UN, NASA reported in 2006 that the ozone hole over the Antarctic reached a record size: 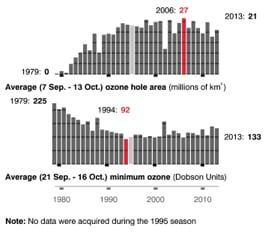 Or does it? Adding to the madness, now there is scientific uncertainty about the actual extent of the ozone problem as it relates to CFCs. More recent science has shown that the sensitivity of the Earth’s ozone layer might very well be 10 times less than was originally believed back in the 1980s when the alarm was first sounded. As reported in the prestigious science journal Nature, Markus Rex, an atmospheric scientist at the Alfred Wegener Institute for Polar and Marine Research in Potsdam, Germany, found that the breakdown rate of a crucial CFC-related molecule, dichlorine peroxide (Cl2O2), is almost an order of magnitude lower than the currently accepted rate:

“This must have far-reaching consequences,” Rex says. “If the measurements are correct we can basically no longer say we understand how ozone holes come into being.” What effect the results have on projections of the speed or extent of ozone depletion remains unclear. (Emphasis added)

One of the biggest issues with the Antarctic ozone hole is that it is not a year-round event. It peaks at its worst during the long, dark Antarctic winter. Observations show that it is highly correlated to weather patterns — more so than to actual atmospheric CFC content. The cold, the lack of sunlight to form new ozone, and the circular wind pattern in Antarctica all conspire to reduce ozone without any help from CFCs at all. Fellow of the American Meteorological Society and co-founder of the Weather Channel Joe D’Aleo says he thinks that the Antarctic ozone hole might simply be a permanent feature of the Earth that we only discovered when we went looking for the posited ozone reduction:

The data shows a lot of variability and no real trends after the Montreal protocol banned CFCs. The models had predicted a partial recovery by now. Later scientists adjusted their models and pronounced the recovery would take decades. It may be just another failed alarmist prediction.

Remember we first found the ozone hole when satellites that measure ozone were first available and processed (1985). It is very likely to have been there forever, varying year to year and decade to decade as solar cycles and volcanic events affected high latitude winter vortex strength. (Source)

With the claim in the AP story of “statistically significant” success being just a tiny reduction at higher latitudes, about 4%, while the Antarctic ozone hole continues mostly unabated, one wonders if the UN claim of success is nothing more than taking credit for simple natural variability.

The ozone hole may be a process that has been around for ages, which we only were able to notice as a result of recent technology.

Anthony Watts is a former television meteorologist and the publisher of WUWT (WattsUpWithThat.com), the world's most-viewed website on climate and global warming.
Read more by Anthony Watts