Several commenters have questioned the veracity of this story. Following is the proof that the photo was originally on the Cordoba Initiative website, and its Shariah Index project page.

The photo originally appeared at http://www.cordobainitiative.org/?q=content/shariah-index-project.

A screen shot is from a cached copy of the original page, from http://gigablast.com/get?q=cordobainitiative.org+sharia&c=main&d=134956785546&cnsp=0. (Also available here on PJM.)

In fact, the photo which was removed still has the following specific internet address, as the Cordoba Initiative has — as of now — forgotten to delete the photo from their server:  http://www.cordobainitiative.org/SIP2.jpg.

Here is how the page appears now, with the photo removed: http://www.cordobainitiative.org/?q=content/shariah-index-project.  (Updated with comparisons of the two in screen-shots below.)

A Cordoba-Iranian connection? What exactly is “Islamicity”?

More questions have arisen about the attempt to build a mosque adjacent to Ground Zero, as part of the so-called Cordoba Initiative. In particular, why has the Cordoba website just removed a photograph of Iranian Mohammad Javad Larijani, secretary-general of the High Council for Human Rights in Iran? Is the move an attempted cover-up of their Iranian connections?

Two weeks ago the Cordoba Initiative website featured a photograph of the project’s chairman, Imam Faisal Abdul Rauf, and Iranian Mohammad Javad Larijani at an event that the Initiative sponsored in Malaysia in 2008. This week, the photograph, which appears below, has disappeared. 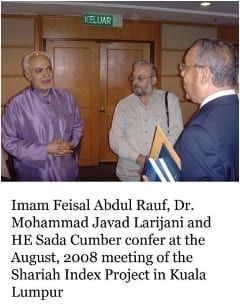 Larijani was the Iranian representative who defended Iran’s abysmal human rights record before the UN Human Rights Council in February and June of this year. Among other things, Larijani told the Council: “Torture is one thing and punishment is another thing. … This is a conceptual dispute. Some forms of these punishments should not be considered torture according to our law.” By which he meant flogging, amputation, stoning, and the criminalization of homosexuality, which are all part of Iranian legal standards. Larijani added: “Iran [has a] firm commitment to the promotion and protection of human rights. … The Islamic Republic of Iran … is a democracy,” which would be news to the pro-democracy activists murdered or confined to Iranian prisons since last year’s fraudulent elections.

The Iranian connection to the launch of Cordoba House may go beyond a relationship between Rauf and Larijani. The Cordoba Initiative lists one of its three major partners as the UN’s Alliance of Civilizations. The Alliance has its roots in the Iranian-driven “Dialogue Among Civilizations,” the brainchild of former Iranian President Hojjatoleslam Seyyed Mohammad Khatami.  Khatami is now a member of the High-level Group which “guides the work of the Alliance.” His personal presidential qualifications include the pursuit of nuclear weapons, a major crackdown on Iranian media, and rounding up and imprisoning Jews on trumped-up charges of spying. Alliance reports claim Israel lies at the heart of problems associated with “cross-cultural relations,” since the “Israeli-Palestinian conflict” and “Israel’s continuing occupation of Palestinian and other Arab territories … are primary causes of resentment and anger in the Muslim world toward Western nations.”

In addition, a Weekly Standard article in July suggested that the idea of building an Islamic memorial in lower Manhattan may have originated back in 2003 with two Iranian brothers: M. Jafar “Amir” Mahallati, who served as ambassador of the Iranian Islamic Republic to the United Nations from 1987 to 1989, and M. Hossein Mahallati.

Also pictured at the same Cordoba-sponsored meeting is U.S. representative to the Organization of the Islamic Conference, Sada Cumber. The meeting was part of the Initiative’s so-called “Shariah Index Project,” a plan to rank and measure the “Islamicity” of a state or “how well … nations comply in practice with this Islamic legal benchmark of an Islamic State.”

In July of last year, Cordoba chief Rauf was interviewed by a reporter for Abu Dhabi Media about the Shariah Index Project. He told The National, “Determining Islamic principles had been the easy part.” Easy, but not available for examination to the residents of New York City or to the loved ones of 9/11 victims. Despite multiple references to the Initiative’s publication more than a year ago of a book “on the concept of measuring a nation’s ‘Islamicity,’” a request for a copy of the book made directly to the New York-based Cordoba Initiative resulted in a denial of the book’s existence.