Geller Agonistes — Truth in Advertising About the Jihad Against Israel

All of us who cherish Western free speech, particularly when it elucidates irrefragable truths, owe an enormous debt to journalist and author Pamela Geller.

An earlier advertising campaign allowed by the MTA promulgated the ahistorical, Islamic supremacist narrative: that all of historical Palestine remains the “fay territory,” or booty, of its 7th century Muslim jihad conquerors who massacred, pillaged, deported, and enslaved the indigenous non-Arab Christian, Jewish, and Samaritan communities; ignored the fact that in 1922, 78% of the League of Nations Mandate for a Jewish Palestinian homeland was arbitrarily used to create a Judenrein by law Muslim state, i.e. “Trans-Jordan” (see contemporary Jordan’s law no. 6, sect. 3, April 3, 1954, reactivated in law no. 7, sect. 2, on April 1, 1963; p. 119, n 82); claimed that since 1948, Israel’s defensive wars of survival deprived the would-be murderous Palestinian Muslim community (abetted by Muslim nation armies, and jihadist volunteers, in the Middle East, and beyond) of some of the remaining disputed territory, while being responsible for “4.5 million Palestinian refugees”— at least six-fold the actual number of perhaps 750,000, and oblivious to the fact 900,000 Jews in Muslim lands, well removed from the battlegrounds in historical Palestine, were simultaneously made refugees via murderous pogroms, expropriations, and expulsions, between 1948 and 1967.

Geller crafted a response to these mendacious anti-Israel ads, and overcame the MTA’s initial refusal to post her ad, with a successful legal challenge. The anti-jihad ad (just below) paraphrases Ayn Rand’s astute, if blunt comments about Palestinian irredentism during a 1979 appearance on Phil Donahue’s show, while, affirming, correctly, the jihad war being waged against Israel. 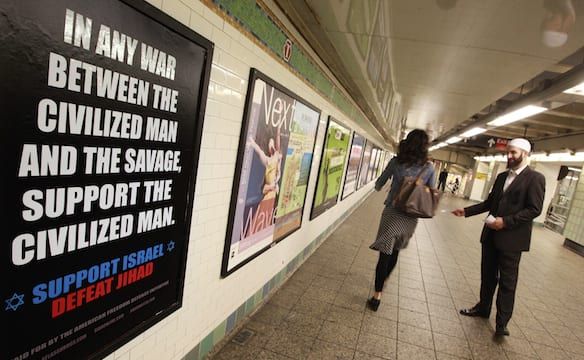 The jihad pathology identified and held up for opprobrium in Geller’s ad was captured in this graphic discussion of jihadist carnage “celebrations” by the Palestinian Muslim masses, excerpted from Dr. Raphael Israeli’s 2003 book Islamikaze—Manifestations of Islamic Martyrology:

…few outsiders have paid attention to the makeshift stage, erected at the terminal of those processions, which bring to their climax the celebrations. Often the latest target they destroyed, for example an Israeli bus loaded with dozens of passengers on board, is meticulously reconstructed in paper, cardboard and cloth, painted so as to imitate the original, and then set ablaze to the lunatic cries of delight of the watching crowds. All the while, the perpetrators of the actual horror against the real Israeli bus, or more often their successors, who wished to cultivate the “heritage” of the deceased Islamikaze, run around the stage in frenzy, shoot long bursts in the air as if possessed by some other worldly power, shout blood-chilling war cries, repeatedly invoke the Power of Allah, smash the burned carcass of the bus and stab with bayonets the “remnants” of the slain “passenger,” whom they, or their fellow kamikaze had earlier slain in reality.

Even these horrendous scenes, taken from a different reality than the one known to civilized people, can be “improved upon” by the Hamas. In Nablus, during the Palestinian Intifadah that broke out in October 2000, a most disturbing “exhibition” was presented to the general public in the city public square, which showed in inhuman detail the replicas of blown-up limbs and body pieces of Israelis who had perished in a restaurant by Hamas Islamikaze. It was only the reports of the deeply disgusted foreign correspondents, and the protests of the Israelis who did not want to relive that horro by seeing it replicated on the screens, which convinced the Palestinian Authority to move the exhibition indoors, not to close it down, and arrest its promoters.

During July 2011, American pollster Stanley Greenberg reported the findings from what was described as an “intensive, face-to-face survey in Arabic of 1,010 Palestinian adults in Judea-Samaria, and the Gaza Strip.”

Here are the two most salient, pathognomonic survey results which further validate the underlying veracity of Geller’s anti-jihad ad:

First, 73% of the Palestinians surveyed agree with the annihilationist dictates of this canonical hadith (the words and deeds of Islam’s prophet Muhammad which have a weight often equal to the Koran), quoted in the Hamas Covenant.

As characterized in the hadith, Muslim eschatology — end of times theology — highlights the Jews’ supreme hostility to Islam. Jews are described as adherents of the Dajjâl – the Muslim equivalent of the Anti-Christ – or according to another tradition, the Dajjâl is himself Jewish. At his appearance, other traditions maintain that the Dajjâl will be accompanied by 70,000 Jews from Isfahan, or Jerusalem, wrapped in their robes, and armed with polished sabers, their heads covered with a sort of veil. When the Dajjâl is defeated, his Jewish companions will be slaughtered — everything will deliver them up except for the so-called gharkad tree, as per the canonical hadith (Sahih Muslim, Book 41, Number 6985) included in the 1988 Hamas Covenant (in article 7). The hadith — which three-fourths of those surveyed agree should be acted upon — is cited in the Covenant as a sacralized, obligatory call for a Muslim genocide of the Jews:

…the Islamic Resistance Movement aspires to realize the promise of Allah, no matter how long it takes. The Prophet, Allah’s prayer and peace be upon him, says: “The hour of judgment shall not come until the Muslims fight the Jews and kill them, so that the Jews hide behind trees and stones, and each tree and stone will say: ‘Oh Muslim, oh servant of Allah, there is a Jew behind me, come and kill him,’ except for the Gharqad tree, for it is the tree of the Jews.” (Sahih Muslim, Book 41, Number 6985)

Second, 80% agreed with the quoted sentiments expressed in article 15 of the Hamas Covenant (subtitled, “Jihad for the Liberation of Palestine is a Personal Duty”), which describes classical jihadist theory — including jihad martyrdom (i.e., homicide bombing) operations — as well as its practical modern application to the destruction of Israel by jihad,  and the need to recruit the entire global Muslim community, or “umma,” in this quintessential Islamic cause:

The day the enemies conquer some part of the Muslim land, jihad becomes a personal duty of every Muslim. In the face of the Jewish occupation of Palestine, it is necessary to raise the banner of jihad. This requires the propagation of Islamic consciousness among the masses, locally [in Palestine], in the Arab world and in the Islamic world. It is necessary to instill the spirit of jihad in the nation, engage the enemies and join the ranks of the jihad fighters. The indoctrination campaign must involve ulama, educators, teachers and information and media experts, as well as all intellectuals, especially the young people and the sheikhs of Islamic movements…

The actual Palestinian Muslim jihad savagery, and its equally heinous, continued, and widespread promulgation with an Islamic religious imprimatur, is far worse than conveyed in the ad’s comparatively staid language.

Free speech champion Pamela Geller, in the words of the late historian and human rights activist David Littman (quoting his beloved Shakespeare’s Henry V, Act 3 Scene 1), has “shown us the mettle of her pasture.” All who wish to protect freedom of speech must  share the burden of its defense, or this bedrock Western freedom will disappear, trampled by Sharia supremacists and their morally cretinous non-Muslim abettors.

Andrew Bostom is the author of The Legacy of Jihad: Islamic Holy War and the Fate of Non-Muslims (2005/2008) and The Legacy of Islamic Antisemitism: From Sacred Texts to Solemn History (2008).
Read more by Andrew G. Bostom