Hidden behind a large shrub near the ten-foot concrete wall surrounding the compound, Ahud bent over and carefully aimed the small metallic disk that was protruding from the top of the black box he had placed on the ground. With a flip of a switch on its side, a red laser painted a tiny dot on a large window on the second floor where his target was hiding, showing exactly where the signal from the disk would hit. With his aim confirmed, he switched off the laser and pushed the large red button on the other side of the box. A faint hum began to emanate from the small weapon and Ahud knew that within seconds, deadly high-frequency radiation would fill the room on the second floor. In another 10 to 15 minutes, that radiation would begin to make its way throughout the entire embassy structure.

Reaching up to his right ear, Ahud pressed the small button on his radio earpiece and transmitted over an encrypted frequency the predetermined code words indicating the successful deployment of the weapon. From his hidden position on the other side of the embassy, Samuel acknowledged his partner Ahud’s call, and he then opened the valve of a small cylinder filled with a toxic and mind-altering concentrated gas. A clear tube ran from the valve to the air-conditioning system of the building, and although it would take at least 30 minutes for the gas to make its way through all the ventilation ducts, the colorless and odorless agent would remain suspended in the air for days, eventually causing a painful death to any creature that ingested it.

With deadly radiation and toxic gas now filling the embassy, Ahud and Samuel retreated to the locations they had picked out earlier so one of them could cover the front exit of the building while the other covered the rear. Their hidden positions gave them a clear shot with their silenced rifles just in case the radiation and the toxic gas failed to kill their target. It did not matter to either of the Israeli mercenaries which method would accomplish their task; all they knew was that a deposed dictator was hiding inside the building and their mission was to make sure he never made it out alive.

Is this a fictional account of a devious and secret government plot from a spy thriller? Could this be a scene from a big-budget Hollywood production where the hero must fend off shadowy attackers that use advanced, never-heard-of weaponry created in clandestine labs?

Actually, this sensationalized account of secret weapons and devious plots is from Mel’s World — as in the deposed Honduran president, Manuel “Mel” Zelaya.

From his refuge inside the Brazilian embassy in Honduras, Zelaya proclaimed in an interview with the Miami Herald that Israeli mercenaries were torturing him with high-frequency radiation. The fugitive ex-president also complained of a sore throat caused by the toxic gas being piped into the embassy by nefarious secret agents.

“We are being threatened with death,” he told the Herald. And he predicted that soon, mercenaries would storm the embassy to assassinate him. The Herald article does not say if Zelaya was referring to the same Israeli mercenaries that were bombarding him with high-frequency radiation — but in Mel’s World, the possibilities are endless and nothing can be too outrageous.

This latest development may seem bizarre to those who are not aware of Zelaya’s eccentricities, but to the Honduran people and to those that have followed his colorful career, it is but another fantastic chapter in the Mel Zelaya saga.

The wannabe presidente for life of Honduras has never been known to be a low-key individual. In fact, the larger-than-life persona he created for himself has always been a source of pride for him. He finds nothing peculiar in his fetish for leather vests, cowboy boots, and the ten-gallon cowboy hats he wears everywhere. Neither does it bother him that although he is 56-years-old, you would be hard-pressed to find a single gray hair on his head or on his trademark bushy mustache. Life in exile these past few weeks may have been rough for this boisterous politician, but at least he has not had to go without his Just For Men hair coloring treatments.

This high regard for himself and his appearance even led Mel to commission an artist to create a life-sized fiberglass sculpture of him so he could admire his own greatness in three dimensions. 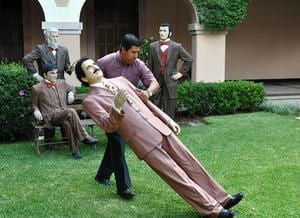 But Mel’s story is not just about personality quirks and fantastical stories of Israeli mercenaries. His tale also includes collusion with President Hugo Chavez of Venezuela in aiding drug traffickers. He has been accused by Honduran authorities of stealing millions of dollars from the Honduran Treasury, and shortly after he was deposed, computers were found in his residence with the results of a vote for the illegal constitutional referendum that never took place. Not surprisingly, the rigged voting results indicated an overwhelming victory for Zelaya’s reform.

Yet with all his peculiarities and criminal activities, the Obama administration, the UN, the OAS, and the EU have all joined hands with the likes of Fidel Castro and Hugo Chavez to call for his reinstatement. According to these supporters, what is best for Honduras is the leadership of an egocentric criminal who believes he is being attacked by Israeli mercenaries using high-frequency radiation.

One would like to think that such a prestigious and law-abiding group of nations and world organizations would avoid and denounce a character such as Zelaya. But as we have already learned, anything is possible in Mel’s World.